Transmission of Ebola virus occurs through direct contact with blood or other body fluids of an infected person after symptoms have developed. During an outbreak of Ebola virus disease (EVD), monitoring persons (termed contacts) who have exposure to persons with EVD is the most effective way to identify and isolate new cases rapidly before transmission can occur (1). At the height of the 2014–2015 epidemic in West Africa, response teams were monitoring daily >7,000 contacts in Liberia, 8,900 in Sierra Leone, and 2,800 in Guinea (Emergency Operations Center, Centers for Disease Control and Prevention, Atlanta, GA, USA, pers. comm.).

The World Health Organization (WHO) guidelines for monitoring contacts of -persons with EVD treat all contacts equally (1). However, when resources are limited, evidence-based criteria for identifying cases of EVD most likely to result in secondary infections could help to optimize control. We analyzed data from outbreaks in rural areas of Liberia and Guinea to determine whether intensifying monitoring of contacts of persons with EVD who died at home in the community was warranted.

Under the leadership of the Ministries of Health (MOHs) of Liberia (July–December 2014) (2) and Guinea (December 2014–June 2015), epidemiologists from multiple agencies investigated rural outbreaks of EVD. Within a community outbreak, field epidemiologists identified case-patients, monitored their contacts, and developed diagrams of infection sequences on the basis of interviews with patients, families, and community members. Transmission diagrams began with the first case identified in the community (index case) and ended when all known contacts had completed 21 days of monitoring with no new cases identified. In both countries, information from EVD case report forms included age, sex, date of symptom onset, date of isolation in an Ebola treatment unit (ETU), and date of recovery or death. Data from Guinea also included whether the person who died at home received a safe and dignified burial performed by trained teams (3). These investigations were conducted as part of the Ebola public health response in West Africa and were not considered to be human subjects research.

Data for Liberia and Guinea were combined. We used generalized estimating equations with a negative binomial distribution to compare the number of secondary infections between groups, including between persons with EVD who died at home in the community and those admitted to an ETU, between persons who were severely ill (death <3 days after admission) and those less ill (death >3 days of admission or recovery) at the time of admission to an ETU, and between persons who were buried safely by trained burial teams and those buried by untrained persons (in Guinea only). Additional details on statistical analyses are included in the Technical Appendix. 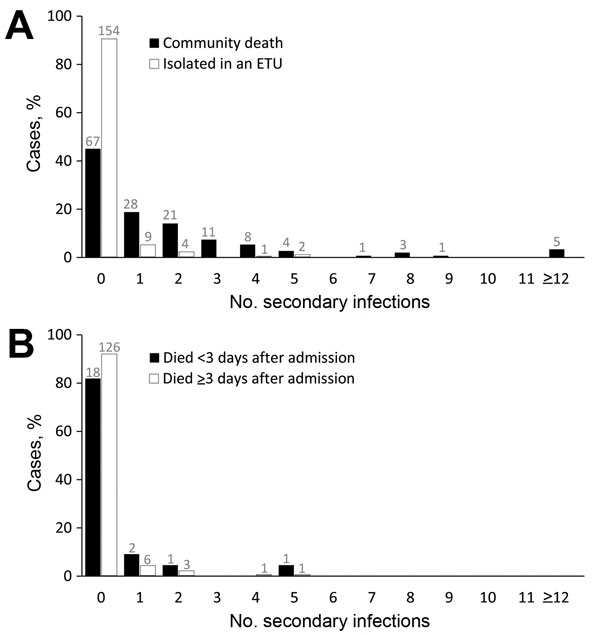 Figure 1. Percentile distribution, by number of secondary infections, of persons with Ebola virus disease (EVD) in rural outbreaks in Liberia and Guinea, 2014–2015. A) Comparison of persons with EVD who died at...

Figure 2. Percentile distribution, by number of secondary infections, of persons with Ebola virus disease in rural outbreaks who died at home in the community, by safe burial status, Guinea, 2015. Numbers above...

Because we did not find an increase in secondary infections according to severity of illness at the time of ETU admission (a proxy for level of viremia), we believe that factors associated with the death are critical in transmission. Traditional burial practices in West Africa include touching and washing the body after death (5). Extensive postmortem exposures to body fluids and skin could occur during that time, and postmortem studies of nonhuman primates have shown that Ebola virus is stable in body fluids for as long as 3 weeks (6). However, it is also likely that there is an increased number of secondary infections because more persons touch the corpse while paying respect to the deceased than would touch a living patient during their illness (7).

Yamin et al. used a stochastic modeling approach to integrate epidemiologic data on Ebola from Liberia to identify potential intervention targets (8). Similar to our data, they found that secondary cases were most associated with nonsurvivors, and that isolation within 4 days of symptom onset could eliminate disease transmission. Our findings differ slightly from those of Yamin et al. because they suggest that isolation of cases of EVD at any time before death would reduce transmission.

In Guinea, we did not find burials reported as safe to have had an effect on reducing the number of secondary infections. Although some of the safe burials might have been misclassified, it is more likely that traditional mourning practices occurred before safe burial teams arrived (7). Response to future outbreaks should emphasize prevention of exposure to Ebola virus during mourning and burial, and cadavers should be classified as safely buried only if they have not been touched after death.

Classifying contacts of persons who died of EVD at home in the community as high-risk, regardless of whether they were reported to have received a safe burial, is an evidence-based approach to prioritizing those persons who should receive more rigorous monitoring. Intensive follow-up could include assignment of highly trained staff to evaluate high-risk contacts more frequently, provision of incentives to complete the 21-day monitoring period, and housing high-risk persons in managed voluntary quarantine facilities.

Dr. Lindblade is an epidemiologist at the National Center for Immunization and Respiratory Diseases, Centers for Disease Control and Prevention, Atlanta, Georgia. Her research interests include evaluations of public health interventions to reduce disease burden in resource-limited countries.

We thank county and prefecture health teams in Liberia and Guinea for their contributions to the public health response to the Ebola epidemic and investigation of persons with Ebola virus disease and their contacts. We also thank the many colleagues from the Centers for Disease Control and Prevention, the World Health Organization, the US Agency for International Development, Médecins Sans Frontières, and the International Federation of the Red Cross for their efforts and dedication.

This study was supported by the Centers for Disease Control and Prevention and the US Agency for International Development.