Since April 2017, a dengue fever outbreak has been ongoing in Côte d’Ivoire. We diagnosed dengue fever (type 2 virus) in a traveler returning to Japan from Côte d’Ivoire. Phylogenetic analysis revealed strain homology with the Burkina Faso 2016 strain. This case may serve as an alert to possible disease spread outside Africa.

In recent decades, dengue virus (DENV) infection has been spreading worldwide. Although in Africa the leading cause of acute febrile illness is still malaria, dengue has recently gained momentum (1). Dengue has been reported in 34 African countries, although it has probably been underreported because of the lack of diagnostic testing and systematic surveillance in Africa (2). Four types of virus have been isolated; the most endemic to Africa is DENV type 2 (DENV-2), followed by DENV-1 (2). The first reported case of DENV-1 infection occurred in a young soldier from Abidjan, Côte d’Ivoire, in 1999 (3). At that time, no other similar cases or epidemics in Abidjan had been reported. In 2008, a closely related strain, DENV-3, was isolated from visitors to Côte d’Ivoire (4,5). In 2010, dengue fever was biologically confirmed for 7 patients who had never been in a dengue-endemic area, and DENV-3 was confirmed by reverse transcription PCR for 4 of these patients (6). A prospective study in Abidjan also revealed that DENV-3 had been the cause of febrile illness during 2011–2012 (7). Thus, DENV-3 may have circulated widely in Côte d’Ivoire, especially in Abidjan. During the 2016 outbreak in Burkina Faso, DENV-2 infection was detected in 2 travelers returning from Burkina Faso to France (8). During August–November 2016, the World Health Organization reported 1,061 probable dengue cases and 15 deaths from dengue (9). We report a case of dengue fever exported to Japan from Abidjan in 2017.

On June 19, 2017, a man in his early 50s sought care at the Center Hospital of the National Center for Global Health and Medicine, Tokyo, Japan, for fever, chills, headache, and mild joint pain. In June 2013, he had traveled to Abidjan for business, and on June 13, 2017, he returned to Japan. He had been vaccinated for yellow fever. He had noticed a high fever in the morning and sought care the same evening. 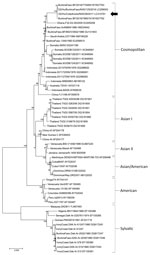 Phylogenetic analysis of the DENV envelope gene indicated that the sequence of DENV-2 obtained from the patient belonged to the cosmopolitan genotype and was 99% identical with the envelope gene of DENV-2 strains from the 2016 dengue epidemic in Burkina Faso (GenBank accession nos. LC206003, KY627763, and KY627762) (Figure). The sequence of DENV-2 from the patient also showed 97% identity with that of the DENV-2 strains from the 1983 (accession no. EU056810) and 1986 (accession nos. HM234642 and GU131843) epidemics in Burkina Faso. Strains of DENV-2 from the 2005 epidemic in Ghana (accession no. EU005258) shared 95% identity with that of the patient reported here.

Phylogenetic analysis indicated that the dengue virus genome sequence in this case is highly homologous with recent strains in Africa, especially from the 2016, 1986, and 1983 outbreaks in Burkina Faso. Similar strains of DENV-2 have repeatedly caused outbreaks in West Africa (8). As of April 2017, DENV-2 and DENV-3 have been isolated from patients in the ongoing outbreak in Abidjan (10). Although no cases have been reported outside Abidjan, the case reported here may be a sentinel case, serving as an alert to the possibility of disease spread outside Africa.

Dr. Suzuki is a medical doctor at the National Center for Global Health and Medicine, Disease Control and Prevention Center, in Shinjuku-ku, Tokyo, Japan. His main research interest is tropical infectious diseases.

This work was supported by grants from the Japan National Center for Global Health and Medicine (grant nos. 27-6001 and 29-1018).