Singapore experienced its first documented Zika virus outbreak in 2016. We identified clinical and laboratory parameters that increase the probability for Zika or dengue virus infection. Early during the illness, combinations of key parameters obtained through clinical assessment and hematologic tests can help distinguish between these infections.

Zika virus recently emerged as a clinically important arbovirus that can cause fetal complications in infected pregnant women and Guillain-Barré syndrome in adults (1–3). Since the first reported large Zika outbreak on Yap Island in 2007 (4), widespread community outbreaks have been reported in many other countries (4,5).

Dengue virus (DENV) threatens the 50% of the world’s population who live in at-risk areas and causes ≈390 million infections annually (6). The frequency and magnitude of epidemic dengue have increased exponentially during the past 4 decades because of such factors as population growth and rising temperatures (7). Severe dengue can result in plasma leakage, systemic shock, multiorgan failure, and eventual death (8).

Zika and dengue have similar presenting symptoms (including fever, rash, arthralgia, myalgia, and headache) (4,9); incubation periods; and transmission routes through Aedes mosquitos (5,6). Accurate and early diagnosis is essential to properly manage the unique complications of each disease.

In Singapore, a tropical island city-state in Southeast Asia, DENV is endemic. Dengue epidemics have been recorded every few years since the 1990s and now predominantly affect adults (8). In August 2016, Singapore experienced its first documented Zika outbreak (10). Before that outbreak, national surveillance of community-based patients (ongoing since 2014) had not detected any local Zika cases (11). The Zika outbreak occurred on the background of ongoing DENV circulation, and medical practitioners had to consider concurrent testing for both infections as part of clinical management.

Using the likelihood ratio approach, we identified clinical and laboratory parameters that increase the likelihood of a laboratory-confirmed diagnosis of Zika virus or DENV infection at first presentation to clinical care. The clinical diagnostic process may lack sensitivity and specificity (12). A positive likelihood ratio (LR+) is calculated using the proportion of patients with the disease having a positive clinical or laboratory finding divided by the proportion of patients without the disease having that same finding (13). This information adds value to clinical diagnosis by refining the posttest probability of a disease. In the absence of confirmatory laboratory tests, a thorough assessment of such parameters may help distinguish between the 2 diseases.

The dengue cohort comprised persons with suspected DENV infection recruited during January 2010–September 2012. Persons in this cohort had fever (temperature >37.5°C), with or without additional signs or symptoms, and no alternative diagnosis at the time they sought care. Cases were defined as a serum-positive DENV NS1 antigen or RT-PCR.

To evaluate parameters during the early phase of each illness for both cohorts, we limited participant recruitment to persons who sought care within 5 days after symptom onset. We obtained ethics approval from the National Healthcare Group (NHG Domain Specific Review Board reference no. 2016/01027). 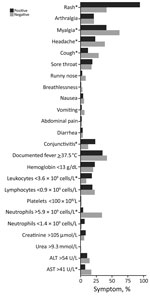 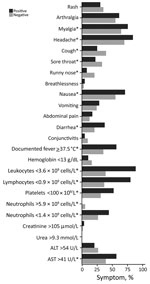 DENV case-patients and non–case-patients most commonly had headache, myalgia, and nausea (Figure 2). Eighty-two percent of case-patients reported gastrointestinal symptoms and, compared with non–case-patients, much higher proportions of leukopenia (89% vs. 39%), lymphopenia (81% vs. 37%), and marked thrombocytopenia (53% vs. 31%).

Our study demonstrated some key differences between the 2 diseases. Presence of rash featured much more prominently in Zika virus infection than DENV infection during the first 5 days of illness. For dengue patients, rashes usually appear during the critical or recovery phases (typically around the fifth day of illness or thereafter) (9). Also, in contrast with dengue patients, relatively few Zika patients had hematologic abnormalities.

Regardless of the patient’s pretest probability for a disease, the change in posttest probability is approximated by a constant (13). In our study, presence of rash with conjunctivitis gave the highest increase in probability (≈40%) of Zika virus infection, whereas a combination of documented fever, lymphopenia, and thrombocytopenia increased the probability for DENV infection by ≈30% (Technical Appendix Table 2). In contrast, absence of rash in a patient with suspected Zika or absence of lymphopenia in a patient with suspected dengue reduced the probability of the respective disease by 30%–45%. In countries where these viruses co-circulate, and where access to confirmatory laboratory testing is limited, these may be simple methods to help medical practitioners assess a patient suspected to have Zika or dengue.

The strengths of our study include the analysis of common parameters, standardized to ensure comparability across the 2 cohorts. Our analysis presents likelihood ratios, which are easy to interpret and aid clinical diagnosis by refining the posttest probability of a disease. The main study limitation is that our analysis compared 2 cohorts recruited at separate times and hence does not directly distinguish between the 2 infections. However, hospital workflows and clinical assessment methods for patients largely did not change between these periods. In both cohorts, cases could have been misclassified as noncases because RT-PCR might have missed patients who sought care late. We reduced this risk by restricting recruitment to patients seeking care within 5 days after symptom onset. Our study demonstrates that a thorough assessment of clinical and hematologic parameters can aid the clinical diagnosis of Zika virus and DENV infections in the early stages.

Dr. Ho is a public health physician working in infectious disease epidemiology. His research interests include surveillance and control of emerging infectious diseases; implementation of preventive measures, such as adult vaccination programs; and outbreak investigation and management.

We thank the staff of the Department of Clinical Epidemiology, Tan Tock Seng Hospital, who helped extract and collate data from the hospital databases for the study.