The recent emergence of highly pathogenic influenza A(H7N9) variants poses a great risk to humans. We show that ferrets vaccinated with low pathogenicity H7N9 virus vaccine do not develop severe symptoms after infection with an antigenically distinct, highly pathogenic H7N9 virus. These results demonstrate the protective benefits of this H7N9 vaccine.

We generated a recombinant virus (HK125–HYPR8) that possesses the HA and neuraminidase (NA) genes of a low pathogenicity WHO-recommended H7N9 candidate vaccine virus (A/Hong Kong/125/2017 [7]) and the remaining genes from a high-yield A/Puerto Rico/8/34 (PR8) vaccine backbone virus (8). The HK125–HYPR8 virus was inactivated with β-propiolactone and purified through sucrose gradient ultracentrifugation.

After 1 immunization, HI titers were significantly lower in the ferrets immunized with nonadjuvanted HK125–HYPR8 vaccine than in those immunized with AddaVax-adjuvanted HK125–HYPR8 vaccine (p = 0.038; Figure 1, panel B; Technical Appendix Table 2); however, after 2 immunizations, ferrets vaccinated with or without adjuvant (groups 1 and 2) developed high HI titers against HK125–HYPR8 virus. Vaccination with HK125–PR8 vaccine did not elicit measurable HI titers against the rGD/3-NA294R challenge virus after the first immunization but elicited reasonably high titers after the second immunization (Figure 1, panel B). After challenge with highly pathogenic H7N9 virus, nonvaccinated ferrets (groups 3 and 4) became lethargic, experienced diarrhea, and lost appetite and bodyweight on days 2–6 postinfection (Technical Appendix Figure), whereas vaccinated ferrets showed no noticeable symptoms. In addition, nonvaccinated ferrets demonstrated statistically higher body temperature than vaccinated ferrets on days 1, 2, 3, 5, and 6 postchallenge (Technical Appendix Figure, Table 5). One ferret in group 3 and 2 ferrets in group 4 had to be euthanized on days 6–8 postinfection (Figure 1, panel C) because of severe symptoms (neurologic signs or inability to remain upright). In contrast, none of the vaccinated ferrets had any symptoms, indicating a protective effect of the low pathogenicity H7N9 vaccine against the challenge virus. 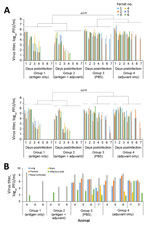 Figure 2. Virus titers in throat and nasal swab specimens and in the organs of vaccinated and nonvaccinated ferrets challenged with highly pathogenic influenza A(H7N9) virus. A) Virus titers in swab samples. Throat...

On day 4 postinfection, we euthanized 3 animals per group and determined virus titers in organs. We also assessed virus titers in organs of ferrets that were euthanized because of severe disease symptoms. In nonvaccinated ferrets, we detected high titers of virus in respiratory organs; in addition, we recovered virus from the olfactory bulbs or pooled samples from anterior and posterior sections of the brains of 7 of the 9 animals tested (Figure 2, panel B). In vaccinated ferrets, we detected virus in the nasal turbinates of 4 of 6 animals and in the olfactory bulbs of 2 of 6 animals. We recovered no virus from the tracheas, lungs, or pooled samples from anterior and posterior brain sections (Figure 2, panel B), indicating that vaccination with HK125–HYPR8 prevented challenge virus replication in the lower respiratory organs.

Dr. Hatta is a senior scientist at the Influenza Research Institute at the University of Wisconsin–Madison. His research focuses on identifying the molecular determinants of influenza virus pathogenicity, with particular emphasis on the pathogenicity of highly pathogenic influenza viruses.

This work was supported by the National Institute of Allergy and Infectious Diseases–funded Center for Research on Influenza Pathogenesis (grant no. HHSN272201400008C), the Japan Initiative for Global Research Network on Infectious Diseases of the Japan Agency for Medical Research and Development (AMED), AMED’s Leading Advanced Projects for Medical Innovation, AMED’s Research Program on Emerging and Re-emerging Infectious Diseases, and by Grants-in-Aid for Scientific Research on Innovative Areas from the Ministry of Education, Culture, Science, Sports, and Technology of Japan (grant nos. 16H06429, 16K21723, and 16H06434).