Human infections with Salmonella enterica serovar Napoli are uncommon in Europe. However, these infections represented 5.9% of salmonellosis cases in Italy during 2014–2015. The source of infection is unknown. We analyzed surveillance data and compared strain genetic similarities and found that contaminated vegetables and surface water are probable sources of human infection.

Salmonella enterica serovar Napoli has attracted interest since 1982, when chocolate contaminated with this serovar and imported from Italy caused 2 foodborne outbreaks (1,2). During 2000–2006, a 140% increase in Salmonella Napoli cases was reported in Europe (3), most (87%) in France, Italy and Switzerland. Since 2004, the Rapid Alert System for Food and Feed (https://webgate.ec.europa.eu/rasff-window/portal/) has received 8 reports of Salmonella Napoli infection, which involved 6 countries and vegetables from Italy as the source of infection.

In Italy, sporadic cases of infection with Salmonella Napoli were reported before and after the first outbreak was reported in 1984 (4). The number of cases increased by 28% during 2000–2011 (5). Recently, Salmonella Napoli has caused waterborne (6) and foodborne (7) outbreaks. Although studies in other countries (3) and Italy (8–10) investigated the mode of infection transmission, the zoonotic reservoir is still unknown.

We extracted data on February 16, 2017, from the passive, voluntary, laboratory-based, surveillance system Enter-Net (http://www.iss.it/ente) for Salmonella spp. isolates from 2011–2015; patient identity was anonymous. Enter-Net is coordinated by the Istituto Superiore di Sanità (Rome, Italy) and contains information on strains from human and environmental samples. We excluded samples from nonhuman and nonenvironmental sources (n = 43), unspecified sample types (n = 21), and undefined Salmonella serovars (n = 1,066) from analysis. We obtained data (aggregated for 2011–2012 and 2013–2014) for Salmonella spp. isolated from food, animals, and feed by using the passive and voluntary veterinary surveillance system Enter-Vet (http://www.izsvenezie.it/temi/malattie-patogeni/salmonella/enter-vet/).

We evaluated potential epidemiologic risks associated with human and environmental Salmonella Napoli isolates and the 5 most frequent nontyphoidal Salmonella (NTS) serovars other than Napoli (monophasic variant of Typhimurium, Typhimurium, Derby, Enteritidis, and Infantis) by using simple 2-way frequency tables. Univariate analysis (p<0.05 by χ2 test) was based on comparing categories for each variable and excluding missing values. We developed a multiple logistic regression model (Stata version 12; StataCorp LLC, College Station, TX, USA) to evaluate potential confounding among variables. We also used data for patients hospitalized with Salmonella Napoli infections or bacteremia as outcomes adjusted for other factors. The top 5 other NTS represented 73% of human Salmonella serovars isolated during 2011–2015. Results were consistent when we compared Salmonella Napoli with all reported NTS.

We serotyped Salmonella spp. isolates by using the White–Kauffmann–Le Minor scheme (11) and evaluated genetic relatedness among Salmonella Napoli isolates by using pulsed-field gel electrophoresis according to the PulseNet protocol (https://www.cdc.gov/pulsenet/pathogens/protocols.html). We performed dendrogram and cluster analyses by using BioNumerics 7.5 (Applied Maths, Sint-Martens-Latem, Belgium). We scored similarity between chromosomal fingerprints by using the Dice coefficient and used the unweighted pair-group method with arithmetic means, 1.00% tolerance limit, 1.00% optimization, and coefficient of similarity >80% to define clonal relationships between strains.

The monophasic variant of Typhimurium (37.3%), Typhimurium (21.6%), Enteritidis (9.3%), Napoli (4.7%), Derby (3.1%), and Infantis (1.9%) were the most frequent of 331 Salmonella serovars identified for 21,486 human records. The proportion of Salmonella Napoli cases increased from 4.3% in 2011 to 5.8% in 2015 (p<0.001). Salmonella Napoli infection was more common in men, infants, children, and the elderly in northern and southern Italy during July–September than other reported serovars (Table 1). For Salmonella Napoli–infected patients with recent travel histories, those who traveled within Italy were more likely infected with this serovar (adjusted odds ratio 7.82, 95% CI 1.00–61.25; p = 0.050) than patients who traveled abroad. Although patients infected with Salmonella Napoli were hospitalized at rates similar to those infected with other serovars (Table 1), they had a greater risk for development of bacteremia (adjusted odds ratio 4.25, 95% CI 3.07–5.88; p<0.001).

Salmonella Napoli ranked fifth (3.7%) among environmental Salmonella spp. and showed a significant increase from 1.6% in 2011 to 2.9% in 2015 (p<0.005). A total of 85% of Napoli isolates were from surface water. Multivariate analysis (Table 2) confirmed that Napoli strains were more commonly isolated during April–September (p<0.001) and less commonly in northern and southern Italy than in central Italy.

Among Salmonella spp. animal isolates, the frequency of Salmonella Napoli increased from 0.7% in 2011 to 1.3% in 2015. A total of 50% of Napoli strains were obtained in the wild, most (70%) from wild boars in northern Italy. The low proportion (0.4%) from food remained stable during 2011–2015. Of 21 Napoli samples, 7 were from shellfish. One alfalfa sample contaminated with Napoli was reported in southern Italy in 2014. 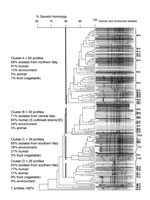 Outbreaks of Salmonella Napoli infection reemerged in Italy during 2011–2015. In Italy, Salmonella Napoli patients accounted for 5.9% of salmonellosis cases reported during 2014–2015. Consistent with a study conducted in Italy (9), we found that surface water, including irrigative water, rather than animal food, was the main cause of infection with Salmonella Napoli. On the basis of an outbreak in Sweden (http://www.epinorth.org/eway/default.aspx?pid_230&trg_Area_5328&MainArea_5260_5328:0:&4148_5326:58&Area_5328_5273:46553::0:5326:574:::0:0), reports of the Rapid Alert System for Food and Feed on vegetables from Italy contaminated with Salmonella Napoli, and that the fact that ≈30% of irrigative surface water in Italy is used for vegetables (https://www.istat.it/it/files/2014/11/Utilizzo_risorsa_idrica.pdf), we believe that ready-to-eat vegetables irrigated with contaminated surface water are the main food vehicle for Salmonella Napoli.

Marked seasonality of cases matching environmental reports might be caused by increased irrigation and consumption of ready-to-eat vegetables during summer and fall, and more frequent human contact with contaminated surface water during summer and fall. We also reported frequent isolation of Salmonella Napoli from wild boars, which suggests a role for dissemination through the environment (12). Human and environmental strains of Salmonella Napoli belonging mainly to cluster A in northern Italy and cluster B in central Italy suggest direct infection. Different clusters for human and environmental strains from southern Italy might indicate wider spread in the environment.

Dr. Sabbatucci is a scientist at the Italian National Institute of Health, Rome, Italy. Her primary research interest is improving public health regarding infectious diseases through applied microbiology and epidemiology.

We thank all participants in the Enter-Net and Enter-Vet networks for providing information and strains, Annalisa Pantosti and Loredana Ingrosso for helpful suggestions, and Slawomir Owczarek and Ildo Benedetti for technical assistance.

This study was partially supported by a grant (Surveillance of Diseases Transmitted by Food and Water [Enter-Net]: adaptation of the Italian system to the European normative framework 1616-2014) from the Italian Ministry of Health.

Page created: March 05, 2018
Page updated: March 05, 2018
Page reviewed: March 05, 2018
The conclusions, findings, and opinions expressed by authors contributing to this journal do not necessarily reflect the official position of the U.S. Department of Health and Human Services, the Public Health Service, the Centers for Disease Control and Prevention, or the authors' affiliated institutions. Use of trade names is for identification only and does not imply endorsement by any of the groups named above.