Père David deer (Elaphurus davidianus) are extinct in the wild and found only in captivity, principally in China, England, and the United States. Just 5,000 animals remain, with 40% located in Dafeng Elk National Natural Reserve in China, which attracts >1 million tourists annually. Ticks are common in the Dafeng Elk National Natural Reserve (1), so we investigated the tickborne bacterial pathogens in Père David deer at this reserve.

We collected a convenience sample of Haemaphysalis longicornis ticks (n = 244) from elk in the Dafeng Elk National Natural Reserve during the summer of 2016 and stored the collection at −80°C. We used the High Pure PCR Template Preparation Kit (Roche Diagnostics GmbH, Mannheim, Germany) according to the manufacturer’s instructions to extract DNA from Père David deer whole blood samples and entire H. longicornis ticks. We used published PCR protocols targeting the 16S rRNA (4), flaB (5), and glpQ (6) genes and an in-house p66 PCR (forward primer 5′-CGATTTTTCTATATTTGGACACAT-3′, reverse primer 5′-GATATAGATTCTACAGGTATTGCATAATC-3′) to screen blood samples and ticks for B. miyamotoi. We sequenced both strands of PCR products using BGI’s (Shanghai, China) services and aligned them using ClustalW in MEGA 7 (http://www.megasoftware.net/) with the nucleotide sequences of 11 relapsing fever group borreliae and 7 Lyme disease group borreliae found in GenBank.

Four (9.3%; 1 male, 3 females) of the 43 deer were seropositive by SNAP 4Dx, demonstrating an immunodominance of antibodies against synthetic C6 peptide invariable region 6 of the pathogenic Borrelia genospecies, B. burgdorferi sensu stricto, B. garinii, and B. afzelii (7). Seropositivity was confirmed by GlpQ antibody ELISA and Western blot with GlpQ recombinant protein, indicating exposure to B. miyamotoi. 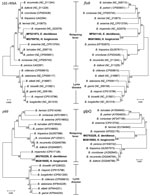 B. miyamotoi is a member of the relapsing fever group first isolated in Japan and subsequently found in North America, Europe, and Russia (8). B. miyamotoi has not been reported in deer but can be pathogenic in humans, usually resulting in an acute febrile influenza-like illness but occasionally causing severe disease, including meningoencephalitis (9). Further studies are needed to determine the effects of B. miyamotoi infections in deer, especially because studies on Ixodes scapularis ticks in the United States have indicated that deer might be a sylvatic reservoir (10).

I. persulcatus and I. pavlovskyi ticks are known to be infected with B. miyamotoi in Asia, whereas other Ixodes spp. ticks are vectors in the United States and Europe (9). Tick control in semi–free-ranging animals is challenging; the Père David deer we studied are commonly infested with ticks. The only tick species identified on Père David deer in Dafeng Elk National Natural Reserve was H. longicornis (1), which can reach high densities in the environment (summer 89.5 ± 17.1 ticks/10 m2, winter 1.47 ± 0.35 ticks/10 m2) and cause anemia and even death in heavily infested animals. Our finding of B. miyamotoi in H. longicornis ticks adds to the list of organisms reported in this tick, primarily B. burgdorferi sensu lato and unclassified Borrelia spp.

Dr. Yang is a doctoral student at the Yangzhou University College of Veterinary Medicine in Yangzhou, China. His primary research interests are veterinary pathogens with zoonotic potential.