The transmission of infectious diseases between wild animals and humans is a dynamic process in which wildlife populations have been a major source of zoonotic diseases. Six human malaria parasite species have been recognized during the past decade: Plasmodium falciparum, P. vivax, P. malariae, P. knowlesi, P. ovale curtisi, and P. ovale wallikeri. The role of human malaria parasites as zoonotic agents in free-ranging great apes remains unclear. Various Plasmodium species have been documented in great apes by using molecular data, including P. praefalciparum, P. adleri, and P. blacklocki in western lowland gorillas (Gorilla gorilla gorilla) (1). Moreover, parasites closely related to human malaria parasites (e.g., P. ovale–like and P. vivax–like) have been identified in other free-ranging great apes (2). Although contact between free-ranging gorillas and humans has increased steadily, no shared malaria parasites have previously been reported in humans and gorillas. A recent study of western lowland gorillas revealed a unique case of P. ovale infection, based on amplification of the mitochondrial cytochrome b (cytb) gene from gorilla fecal samples (1). To clarify the implications of possible co-circulation of malaria parasites in humans and gorillas, we reevaluated human blood and western lowland gorilla fecal samples from the previous study using state-of-the-art molecular tools.

Dzanga Sangha Protected Areas is located in southwestern Central African Republic, bordering the Democratic Republic of the Congo in the east and Cameroon in the west. We collected 131 gorilla fecal samples during August–October 2012 from 2 habituated western lowland gorilla groups and from several unhabituated gorillas around the Primate Habituation Programme camps of Mongambe and Bai Hakou. We collected human blood samples in 2012 as part of a health monitoring program for National Park and Primate Habituation Project employees. We received 95 blood samples from asymptomatic participants. 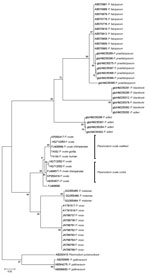 In this study, we found the human malaria parasite P. ovale wallikeri in both asymptomatic humans and western lowland gorillas in Dzanga Sangha Protected Areas. Molecular analysis revealed that the genotype of the P. ovale wallikeri DNA found in a gorilla was genetically identical to that of a human isolate within the mt cytb and mt cox1 genes, indicating potential human–ape transmission. Analysis of nuclear genes failed in gorilla feces; thus, it remains unclear which parasite stages can be detected in feces (8). Although the mt cytb and mt cox1 genes are not the best-suited genes for genotyping human malaria parasites because of their homogeneity, these genes allow clear species discrimination from P. ovale–like parasites found in, for example, chimpanzees in Côte d’Ivoire (9) and the Democratic Republic of the Congo (10), which have never been reported in humans. This finding in a western lowland gorilla corroborates a finding of P. ovale in a chimpanzee from Cameroon (6) with a sequence identical to P. ovale wallikeri. However, further studies are required to evaluate the role of great apes as reservoirs of human malaria parasites and vice versa, and the implications of these findings for malaria epidemiology.

Dr. Mapua is a senior researcher in the department of pathology and parasitology at the University of Veterinary and Pharmaceutical Sciences in Brno, Czech Republic. Her research interests include molecular ecology, cross-species transmission of Plasmodium sp., parasitology, and primatology.

We thank Barbara Eigner for her excellent technical support and Colin Sutherland for the critical assessment of the manuscript. We also thank the government of the Central African Republic and the World Wildlife Fund for granting permission to conduct our research in the Central African Republic; the Ministre de l’Education Nationale, de l’Alphabetisation, de l’Enseignement Superieur, et de la Recherche for providing research permits; and the Primate Habituation Project for providing logistical support in the field.