We based our study on the Health Insurance Review and Assessment Service database, which includes universal health insurance claim data in South Korea. Approximately 97% of the population (≈52 million persons) is included in the system (3). We obtained demographic and medical data from the database for 2007–2016. We defined NTM infection as the presence of a diagnostic code associated with NTM infection (International Classification of Diseases, 10th ed., code A31) as either a primary or secondary diagnosis (4) and claims data for acid-fast bacilli smears or mycobacterial culture.

We defined annual prevalence as the number of all patients with NTM infection alive during each year and annual incidence as the number of newly diagnosed NTM infections occurring each year after excluding patients who were diagnosed in a previous study period (e.g., patients diagnosed during 2007–2015 were excluded from the estimate of the 2016 incidence rate). We first calculated the crude prevalence rate and incidence rate using each year’s total population as the denominator. To adjust for different population structures between years, we calculated the age- and sex-standardized annual prevalence rate and incidence rate of NTM disease using the 2005 population as a standard population, based on the Statistics Korea method (http://kostat.go.kr/portal/eng/index.action). First, we calculated the prevalence and incidence rates for age and sex groups by stratifying all NTM cases into the groups and dividing by the group-specific populations in each year. Then, we multiplied each year’s group-specific rates and the group-specific populations in 2005, combined the multiplied values, and divided by the 2005 total population. We calculated standardized overall period prevalence of NTM infection by age, sex, and administrative divisions using the population in the middle of the study period. We conducted statistical analyses using SAS version 9.4 (SAS Institute, http://www.sas.com). Because we used deidentified data in the study, institutional review board approval and patient consent were not required. 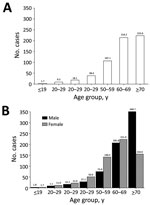 Analysis of age and underlying conditions indicated that most case-patients (83.4%) were >50 years of age (Table 2). The most frequent underlying respiratory condition was asthma (53.0%), followed by bronchiectasis (43.6%) and chronic obstructive pulmonary disease (COPD) (32.3%). Lung cancer was the most common malignancy (6.3%). Depressive disorder was noted in 23.1% of case-patients.

Another notable finding in our study was the difference in NTM prevalence by administrative division, which indicates that NTM infection is related to population density and the degree of urbanization. Supporting our data, other studies have attributed NTM infection to environmental exposure (9), and recent studies in the United States revealed that areas with high risk for NTM infection had higher population densities or higher education and income levels (9,11). In South Korea, the population density is highest in metropolitan cities. These data suggest the importance of epidemiologic surveillance in understanding NTM infection.

We frequently observed airway diseases in NTM infection in our study. A US study also reported COPD in 41% and bronchiectasis in 37% of NTM patients (10), whereas a study in Germany noted COPD or emphysema in 62%–79% of patients (4). One study reported mental disorders as concurrent NTM-related conditions (12). In our study, depression was also identified in NTM, which might be explained by the burden of COPD (13). These data suggest that an assessment of underlying disease is needed in managing NTM infection.

Our study had some limitations. First, because we used diagnosis codes, the distinction between pulmonary and other diseases is unclear, and we could not confirm whether the patients completely met the diagnostic criteria of NTM infection. Second, because we only have data for 2007–2016, we could not exclude patients who had received diagnoses before 2007 when estimating the annual incidence rate. Finally, our definition of NTM infection on the basis of the International Classification of Diseases code may have underestimated the true disease prevalence (14,15) because prevalence could be affected by loss to follow-up or death during the study period.

In conclusion, we report a substantial increasing trend in the prevalence and incidence of NTM infection in South Korea during 2007–2016 and evaluated regional variations. These data facilitate a better understanding of the epidemiologic trends of NTM infection globally.

This work was supported by the National Research Foundation of Korea (NRF) Grant funded by the Ministry of Science and ICT (Information and Communication Technologies), South Korea (grant no. NRF2018R1C1B6001708; W. Myung), and by the Basic Science Research Program through the NRF of Korea funded by the Ministry of Education, South Korea (grant no. NRF-2018R1D1A1B07049034; H. Lee).

Dr. Lee is a research assistant professor at the Institute of Health and Environment at Seoul National University, South Korea. Her work focuses on health impact assessment of environmental risk factors, including air pollutants and climatic factors.