We report the identification of astrovirus WI65268 in a white-tailed deer with respiratory disease in the United States in 2018. This virus is a recombinant of Kagoshima1-7 and Kagoshima2-3-2 (both bovine astroviruses from Japan) and was characterized as a potential new genotype. Further surveillance of deer might help identify related isolates.

Astrovirus is a positive-sense, single-stranded RNA virus first identified in feces of children with gastroenteritis in 1975. Since then, astrovirus has been found in a wide variety of mammals and birds (1). The family Astroviridae comprises 2 genera, Mamastrovirus and Avastrovirus, and classification is based on host origin. Astroviruses cause diarrhea and neurologic diseases in mammals and a spectrum of diseases, including diarrhea, hepatitis, and nephritis, in birds (2). Astrovirus is associated with respiratory disease in humans, cattle, and pigs (3–5) and has also been found in fecal samples from roe deer with gastrointestinal illness in Denmark (6). Whether astrovirus circulates in other species of deer remains unclear.

In September 2018, the Veterinary Diagnostic Laboratory at Iowa State University (Ames, Iowa, USA) received 5 sets of tissue samples collected from deer of the same farm for identification of the infectious cause of death of 5 male white-tailed deer 8–14 weeks of age. The pen-raised deer experienced pneumonia and sudden death. Postmortem examinations showed pleural fluid in the lungs, pneumonia, and purple-mottled lungs. Histopathologic observations revealed that 3 deer had necrotizing bronchopneumonia, and 2 had interstitial pneumonia.

Although different combinations of the bacterial pathogens Bibersteinia trehalosi, Tureperella pyogenes, Fusobacterium necrophorum, and Pasteurella multocida were found in all cases, an underlying viral cause could not be excluded. Therefore, we used next-generation sequencing, first with pooled lung samples and then with individual lung samples, using Nextera XT DNA Library Preparation Kit with the MiSeq platform and MiSeq Reagent Kit v2 (Illumina, https://www.illumina.com). A bioinformatic analysis indicated the presence of an astrovirus along with the bacteria. The complete genome sequence (6,246 nt) of this astrovirus (WI65268; GenBank accession no. MN087316) was found in the pooled lung tissue sample and 1 lung tissue sample, and partial genomes were found in the other 4 lung samples. A complete-genome comparison revealed that BoAstV/JPN/Ishikawa24-6/2013 (bovine isolate from Japan) had the highest identity (60.9%) to WI65268. Further nucleotide sequence analysis revealed that WI65268 had a similar genome organization as other astroviruses (Appendix Figure 1). 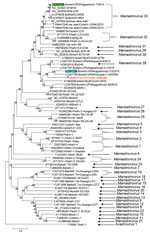 Phylogenetic analysis of the complete genome showed that WI65268 is distantly related to other bovine, dromedary, takin, and yak strains (Appendix Figure 2). In phylogenetic analyses of ORF1a and ORF1b protein sequences, WI65268 clustered with bovine, yak, and takin astrovirus isolates from Asia (Appendix Figure 3). However, in an analysis of ORF2 (capsid) protein, WI65268 clustered with 2 bovine isolates from Japan and was distantly related to the cluster formed by the bovine, yak, and takin isolates from Asia (Figure), strongly indicating that WI65268 is a recombinant. We used Recombination Detection Program 5 (http://web.cbio.uct.ac.za/~darren/rdp.html) to confirm that WI65268 was a recombinant and characterize the recombination event (Kagoshima1-7 at 1–5,031 and 5,651–7,967 and Kagoshima2-3-2 at 5,032–5,650; Appendix Figure 4). Reverse transcription PCR and sequencing results confirmed that sequences at the 2 junctional sites were the same as those found by next-generation sequencing.

Determining the evolution of WI65268 any further is difficult without further epidemiologic data. Bovine or bovida astroviruses might be able to cross species barriers and replicate in deer, as suggested in a previous study (9), in which a bovine astrovirus isolate clustered with a porcine astrovirus type 5 instead of other bovine astroviruses. Further surveillance of white-tailed deer for astrovirus is needed for field monitoring.

Dr. Wang is a clinical assistant professor in the College of Veterinary Medicine at the University of Illinois, Urbana, Illinois, USA. His research interests focus on diagnosis of viral infectious diseases and novel pathogen discovery.