We report a case of urogenital schistosomiasis in a 34-year-old male patient in Nepal and summarize additional case reports. These cases provide putative evidence for the potential existence of human-pathogenic (most likely zoonotic) schistosome species on the Indian subcontinent.

We report the case of a 34-year-old male patient from Siraha District, Nepal, in the outer Terai Region bordering India. The patient was referred to us in October 2019 by his regional hospital because of a diagnosed microhematuria and reported intermittently observed episodes of macrohematuria. The patient reported no relevant medical history and had never traveled abroad other than to visit neighboring districts in Nepal and across the border to India. He earned his living as a fisherman. 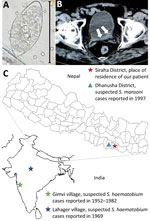 After praziquantel treatment (40 mg/kg for 3 d), hematuria resolved, and no more eggs were detectable at follow-up 2 weeks later.

In 1952, Gadgil and Shah (3) reported the detection of terminal-spined trematode eggs resembling those of S. haematobium in human urine samples from Gimvi, a village 250 km south of Bombay in India. In Gimvi village, terminal-spined trematode eggs were detected in 250 of 1,200 villagers; hematuria was the most common clinical manifestation. At the time of this discovery, available information suggested that the infectious focus area had existed for at least 60 years (3). Malacologic investigations in the river running through the village and infection experiments identified the Ferrissia tenuis snail as a competent intermediate host that, to date, has been reported nowhere else as intermediate host of S. haematobium (4). After the river was treated with copper sulfate and the patients with antimontartrate, a follow-up survey in 1957 showed that 11.1% of the male and 8.7% of the female villagers were still infected; the highest infection rate (36.8%) was observed in boys 10–15 years of age (5). After the introduction of praziquantel in the 1980s, the Gimvi focus was successfully eliminated (6).

The parasite identified at Gimvi village was named and reported as S. haematobium on the basis of its egg morphology and the clinical manifestation in infected patients. However, the lifecycle of the Gimvi schistosome does not include the classical snail intermediate host genus Bulinus, raising questions about on its identification as S. haematobium in the 1950s. Unfortunately, parasitologic samples from that time are no longer available for in-depth molecular testing.

In 1969, seventeen years after the first description of the Gimvi cases, Shrivastava and Arora (7) reported the finding of Schistosoma typical egg granuloma in the bladder biopsy of a 26-year-old woman from Lahager village, situated in Raipur District of Madhya Pradesh, India. A village survey revealed a high prevalence of hematuria among the villagers. Upon urine microscopy, eggs “highly suspicious of S. haematobium” were found in some of the samples and “in one deposit features of S. haematobium eggs were seen.” No further cases were reported from this region thereafter.

In 1997, Sherchand and Ohara reported the finding of lateral-spined trematode eggs, resembling those of S. mansoni, in a fecal sample from an inhabitant of Dhanusha District in the Terai Region, Nepal, during a coprologic survey conducted in 1995 (8). In 1997, similarly shaped eggs were detected in fecal samples of another 2 inhabitants in Dhanusha District (9). No clinical data are available for these 3 cases. In 1999, a serologic survey conducted among 508 inhabitants of the same district, reported an overall seroprevalence of 18.1% (range 1%–42.7%, depending on the surveyed village) (9). Of interest, Dhanusha is the neighboring district to that of the patient we report.

In summary, it appears that Schistosoma species capable of infecting humans are present on the Indian subcontinent. However, although the reported morphology of microscopically detected eggs in fecal samples resemble those of human-pathogenic species, the local absence of any classical intermediate host snails and the apparently low number of cases questions the assumption that endemic foci may simply have been overlooked in the past. We suspect that our case, as well as the previously reported cases, most likely depicts zoonotic infections. Unfortunately, we were unable to continue follow-up on the patient we describe, and no diagnostic samples were stored that would allow us to clarify the species by molecular-genetic investigations. We hope this shortfall can be rectified in future cases.

Page created: May 06, 2020
Page updated: June 18, 2020
Page reviewed: June 18, 2020
The conclusions, findings, and opinions expressed by authors contributing to this journal do not necessarily reflect the official position of the U.S. Department of Health and Human Services, the Public Health Service, the Centers for Disease Control and Prevention, or the authors' affiliated institutions. Use of trade names is for identification only and does not imply endorsement by any of the groups named above.