Heartland virus (HRTV), a phlebovirus in the order Bunyavirales, is an emerging zoonotic pathogen. In 2009, after 2 cases were identified in persons in Missouri, additional cases were subsequently reported from Kansas, Oklahoma, Arkansas, Missouri, Tennessee, Kentucky, Indiana, Georgia, and South Carolina. Disease onset was most often during April–September (1). HRTV symptoms can initially resemble those of ehrlichiosis (2) and include fatigue, fever, leukopenia, and thrombocytopenia (3). Human illness caused by HRTV infection often requires hospitalization and has resulted in death (1).

After 2 persons infected with HRTV in northwestern Missouri reported having noticed attached ticks before symptom onset (4), subsequent entomologic studies detected HRTV in nymphal Amblyomma americanum ticks. Laboratory studies confirmed the competence of A. americanum ticks for transmitting HRTV transstadially and horizontally (5). This body of evidence led to the implication of A. americanum ticks as the putative vector of HRTV (2,6). Serologic surveys of mammals and birds subsequently detected HRTV-specific neutralizing antibodies in a variety of mammals, including raccoons and white-tailed deer, suggesting that various medium- and large-sized mammals may serve as hosts (3,7).

A. americanum ticks are vectors of public health concern because of their aggressive biting behavior, willingness to feed on humans, and abundance. Over the past century, their distribution range has expanded northward (8), and population establishment continues to increase because of climate change (9). Habitat suitability models have suggested that this species’ fundamental niche should reach the center of Illinois (10) or eventually encompass the state entirely (9).

In July 2018, a Kankakee County, Illinois, resident (case-patient 1) reported having incurred multiple tick bites while camping on private residential property. The patient was hospitalized with fever, headache, myalgia, nausea, diarrhea, and a diffuse maculopapular rash. In September 2018, a Williamson County, Illinois, resident (case-patient 2) noticed tick bites while staying at a campground near home. The patient was hospitalized with fever, headache, myalgia, fatigue, decreased appetite, nausea, and diarrhea. The Centers for Disease Control and Prevention (CDC) confirmed that clinical samples from both patients were positive for HRTV. We subsequently performed entomologic investigations to determine tick density and HRTV prevalence among tick populations at the likely sites of exposure. 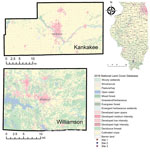 Figure. Tick collection sites associated with 2 cases of Heartland virus infection in humans, Kankakee and Williamson Counties, Illinois, USA, 2019. Locations of the counties are indicated by red dots on the...

The suspected sites of human exposure were determined according to case-patient interviews conducted by local county health departments (Figure). Two of the 3 sites were in an area considered endemic for A. americanum ticks, and the other site was near the putative current northern distribution range limit for this tick vector.

For case-patient 1, the potential exposure site was an ≈40-acre rural homestead in Kankakee County, which had an assemblage of barnyard animals, including chickens, goats, horses, and turkeys (site 1) and a small amount of forest surrounded by extensive cropland. For case-patient 2, in Williamson County, a potential exposure site consisted of 2 adjacent lakeshore campgrounds located within a heavily wooded wildlife refuge (site 2) and another was a suburban home with sparse tree cover (site 3). We observed deer at site 1 during collection visits on June 21 and 25, 2019, and deer, coyotes, and racoons at site 2 during visits on July 11 and 12, 2019. A pet dog lived at the residence at site 3, which we visited on July 11, 2019. 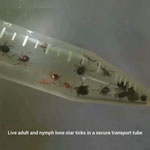 Video. Adult female and male and nymphal Amblyomma americanum ticks being transported alive in field within a secure tube.

We collected ticks by dragging along 150-m transects (sites 1 and 2) and with carbon dioxide traps consisting of a 1 m2 white cloth laid on the ground with 0.5 kg of dry ice left in the center to sublimate for 2 hours before returning to collect ticks (sites 1–3). We collected live ticks into 14-mL plastic centrifuge tubes (TPP, https://www.tpp.ch) that had been modified by applying carpet tape between the lid and tube mouth. We added ticks through a tape-covered hole punched in the center of the paper-backed side of the tape; the sticky side of the tape facing the tube interior immobilized the ticks before they could exit, enabling their secure transport while alive (Video). Ticks were either kept alive (site 1) or killed in the field at the end of the day and kept on dry ice (sites 2 and 3) during transport to the Illinois Natural History Survey Medical Entomology Laboratory (Champaign, IL, USA), where they were identified and sorted by species, life stage, and sex (11,12) on a chill table and maintained at −80°C. Ticks were then shipped on dry ice to the CDC Arboviral Diseases Branch (Fort Collins, CO, USA) for Heartland and Bourbon virus testing, where tick pool homogenization, RNA extraction, and virus screening were performed by real-time PCR as previously described (2,13). The prevalence of virus infection from pooled samples was calculated by using PooledInfRate, which implements a bias-corrected maximum-likelihood estimation method (14).

Detection of HRTV in adult A. americanum ticks suggests that infected ticks may have overwintered in the area and maintained HRTV infection transstadially. The presence of HRTV in adult male, but not female or nymph, ticks was also reported in a study in Kansas, where the infection rate varied from 3.29 to 8.62/1,000 ticks (15), similar to our findings. Additional tick collection efforts and wildlife serosurveys will help assess whether transmission cycles are active in Illinois and enhance our knowledge of the transmission ecology of this rare pathogen.

Dr. Tuten is a vector ecologist at the Illinois Natural History Survey at the University of Illinois at Urbana–Champaign, in Champaign, Illinois. Her research interests are vector behavior, control, ecology, demography, pathogens, and population genetics. Dr. Burkhalter is a microbiologist in the Division of Vector-Borne Diseases, National Center for Emerging and Zoonotic Infectious Diseases, CDC, Fort Collins, CO. Her research interests include the development and optimization of methods to improve detection of arboviruses in environmental samples and providing support for CDC’s public health partners.

We are grateful to the Heartland case-patients, who allowed us to conduct tick collections. We thank Bethany McGregor, who assisted with tick homogenization; and Kayla Valcheva, Ashley Ray, and Alan Hatia, who helped with tick dragging. We also thank Roxanne Connelly and anonymous reviewers for comments on this manuscript.

This work was supported through an agreement with the Illinois Department of Public Health. Points of view or opinions expressed in this document are those of the authors and do not necessarily represent the official position or policies of the Illinois Department of Public Health or the Centers for Disease Control and Prevention. The INHS Medical Entomology Lab is additionally supported through the State of Illinois Used Tire Management and Emergency Public Health Funds.

Page created: May 01, 2020
Page updated: June 18, 2020
Page reviewed: June 18, 2020
The conclusions, findings, and opinions expressed by authors contributing to this journal do not necessarily reflect the official position of the U.S. Department of Health and Human Services, the Public Health Service, the Centers for Disease Control and Prevention, or the authors' affiliated institutions. Use of trade names is for identification only and does not imply endorsement by any of the groups named above.