California laboratories and medical providers must report all positive and nonpositive (i.e., negative, inconclusive, or invalid) SARS-CoV-2 laboratory results to their local health jurisdictions (LHJs) (2). For influenza, only positive results that can be submitted electronically by laboratories are reportable. Most data are reported directly to CDPH’s web-based platform, California Reportable Diseases Information Exchange (CalREDIE). CalREDIE assigns electronic laboratory reports a unique identifier, personID, that can be used to link the same person across different disease reports. CalREDIE is used by 59 of California’s 61 LHJs for disease tracking and reporting. Two LHJs, Los Angeles and San Diego, which represent one third of California’s population, do not use CalREDIE directly; we excluded data from those LHJs. 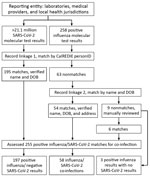 We matched laboratory results first using CalREDIE personID, then by name and date of birth, and finally by manual record review if positive influenza results did not match to SARS-CoV-2 results by personID or name and date of birth (Figure 1). If a person had both positive and nonpositive SARS-CoV-2 results within 7 days of a positive influenza result, we used the positive SARS-CoV-2 result in the analysis. Persons with both positive influenza and SARS-CoV-2 test results with ≤7 days between specimen collection dates met criteria for influenza and SARS-CoV-2 co-infection. We analyzed co-infection data by week of illness onset and geographic distribution. We summarized co-infected persons by age, race and ethnicity, sex, hospitalization, and survival status. We completed all analyses using SAS version 9.4 (SAS Institute, http://www.sas.com). This study received a nonresearch determination from the California Committee for the Protection of Human Subjects.

Influenza activity was minimal during the 2020–21 influenza season in the United States and Northern Hemisphere, after low levels were reported in the Southern Hemisphere during the 2020 season there (3,4). Only 258 positive influenza test results were reported to CDPH during September 1, 2020–April 30, 2021, in contrast to the >1.77 million COVID-19 cases reported by the 59 LHJs included in this analysis. The low numbers of influenza infections in this report are consistent with California sentinel laboratory data and national trends (1,3). In addition, influenza activity in California during 2020–21 was at a historic low based on clinical sentinel laboratory data collected from 2009–2020 (5). Less than 1% of specimens tested were positive for influenza at California clinical sentinel laboratories throughout the 2020–21 influenza season, compared with peaks in influenza specimen positivity of 24%–41% in prior seasons. Overall, 58 (23%) of 255 persons with a positive influenza test result and a matching SARS-CoV-2 test result met our case definition for a co-infection.

Multiple factors likely account for the 2020–21 influenza season trends we observed in California. Travel was substantially affected by shelter-in-place policies, and reduced travel might have interrupted traditional influenza transmission patterns in which travelers carry influenza viruses between regions. Adopting COVID-19 mitigation practices, including social distancing, wearing face coverings, and closing schools and businesses, might also have helped prevent the transmission of influenza in communities. Factors such as viral interference might have contributed to the uncharacteristically low influenza activity reported (6). It is not yet clear how much influenza vaccination contributed to the minimal levels of influenza activity reported. Preliminary data from the Centers for Disease Control and Prevention indicate that overall, ≈53% of US adults had received the 2020–21 seasonal influenza vaccine by January 2021, compared with 45% of adults who had received the 2019–20 vaccine by January 2020. However, vaccination percentages were lower among children, especially Black and Hispanic children, and pregnant women in 2021 (7).

The first limitation of our analysis is that the lack of influenza laboratory data from Los Angeles and San Diego LHJs likely underestimates the number of influenza infections and co-infections with SARS-CoV-2 in California. However, Los Angeles and San Diego LHJs reported similarly low levels of influenza activity, and thus, including data from those LHJs is unlikely to have changed the main findings of this analysis (8,9). We could not assess whether medical providers and patients sought influenza testing during this surveillance period as routinely as they did in years past because nonpositive influenza test results are not reportable to CDPH. It is possible that SARS-CoV-2 testing was prioritized over influenza virus testing, and infrequent or inaccessible influenza testing might have contributed to underestimates of influenza transmission in California. Finally, we did not require that test results reported by laboratories and medical providers undergo confirmatory testing by public health laboratories for inclusion in this analysis.

Ongoing public health surveillance is needed to assess the burden of SARS-CoV-2 infection and interactions with other respiratory viruses, including influenza. Healthcare providers should consider testing patients for influenza and SARS-CoV-2 on the basis of the local epidemiology of these infections and public health guidance. Safe and effective vaccines are available throughout the United States to prevent against both influenza and COVID-19 (10,11). Healthcare providers should encourage influenza and COVID-19 vaccination as a primary prevention strategy for all community members, especially among persons of color and low-income residents, who are disproportionately affected by both diseases.

Mr. Rizzo is a research scientist with the Immunization Branch at the California Department of Public Health. His work focuses on vaccine-preventable diseases.

CDPH greatly appreciates the work of healthcare providers, laboratorians, researchers, and local health departments for their tireless efforts during the COVID-19 pandemic.

Aspects of this work were supported by funds from Centers for Disease Control and Prevention epidemiology and laboratory capacity grants and immunization grants and from the Coronavirus Aid, Relief, and Economic Security (CARES) Act.

Page created: September 09, 2021
Page updated: October 19, 2021
Page reviewed: October 19, 2021
The conclusions, findings, and opinions expressed by authors contributing to this journal do not necessarily reflect the official position of the U.S. Department of Health and Human Services, the Public Health Service, the Centers for Disease Control and Prevention, or the authors' affiliated institutions. Use of trade names is for identification only and does not imply endorsement by any of the groups named above.