The seventh cholera pandemic, caused by Vibrio cholerae O1 biotype El Tor (7PET), arrived in Africa during 1970 and became endemic in many countries on the continent (1). Cholera was first reported in South Africa in 1974 (2). However, South Africa is not considered a cholera-endemic area; outbreaks typically are associated with importation, particularly from neighboring countries. The last cholera outbreak in South Africa was triggered by imported cases from an outbreak in Zimbabwe during 2008; South Africa reported 12,706 cases during November 2008–April 2009 (3).

Globally, 7PET isolates are genetically homogeneous and linked to the Bay of Bengal in South Asia (4,5). Most 7PET isolates are multidrug-resistant sequence type (ST) 69 (6). Rarely, 7PET has a single-locus variant, ST515, in isolates from Africa belonging to lineage T10 (7). As of September 2021, all cholera isolates from South Africa have been characterized as 7PET ST69 by multilocus sequence typing (MLST).

South Africa actively surveils for cholera. Since the 2008–2009 outbreak, few cases have been identified: 5 during 2010–2014, most of which were imported, and none during 2015–2017. During 2008–2009, large outbreaks occurred in 3 provinces, Mpumalanga, Limpopo, and KwaZulu-Natal (3), but all were caused by imported cases from neighboring Zimbabwe and Mozambique. Therefore, given their experience, healthcare workers and laboratorians in these provinces typically will test for cholera in all cases of acute watery diarrhea.

During February 2018–January 2020, NICD received 102 V. cholerae isolates for testing; 9 were identified as V. cholerae O1. We characterized the bacteria by whole-genome sequencing, comparative genomics, and phylogenetic analysis (Appendix 1). The Human Research Ethics Committee of the University of the Witwatersrand (Johannesburg, South Africa) provided ethics approval for this study (protocol no. M160667).

Of 9 V. cholerae O1 isolates tested, we identified 2 ST69 (7PET) and 7 ST75 isolates. The ST69 isolates were collected in October 2018 from 2 cholera patients in a family cluster. The index case-patient had traveled to Zimbabwe, where an outbreak was ongoing (8), within the 7-day cholera incubation period before symptom onset. We confirmed these ST69 isolates belonged to the previously described highly antimicrobial-resistant Zimbabwe outbreak strain (8). The 7 ST75 isolates originated from KwaZulu-Natal and Limpopo Provinces. Five isolates were collected from patients with cholera, all adults 37–57 years of age; 2 isolates were from environmental samples collected during case investigations, 1 from sewage in Limpopo Province and 1 from river water in KwaZulu-Natal Province (Table 1). The 3 KwaZulu-Natal cases occurred ≈200–600 km apart; the first occurred in February 2018 and the last in January 2020. The 2 Limpopo cases occurred ≈70 km apart in the same district during November 2018. The Limpopo cases were >900 km from the KwaZulu-Natal cases. Epidemiologic investigations involved interviewing case-patients by using a standard case investigation form; visiting case-patients’ residences to inspect water and sanitation services and interview other household members; collecting stool samples from household members; and collecting environmental samples when indicated. Investigators found no evidence of importation from another country, epidemiologic links between cases, or secondary transmission. 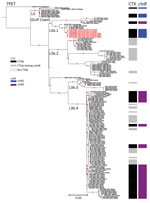 We further compared the ST75 isolates from South Africa with a larger global collection of 144 ST75, or closely related ST169, ST170, and ST182, genomes (Appendix 2), and constructed a maximum-likelihood phylogeny by using 49,540 SNPs (Figure). Our phylogenetic analysis showed that the 7 isolates from South Africa clustered in the L3b.1 clade, defined by H. Wang et al. (9), with a maximum pairwise distance of 22 SNPs. Isolates from Limpopo Province had a maximum pairwise distance of 1–6, but KwaZulu-Natal Province isolates had no SNP differences. Core-genome MLST showed Limpopo Province isolates differed from the KwaZulu-Natal Province isolates by 4–5 alleles (Appendix 1 Figure). The closest related isolates were collected in Russia from Rostov Oblast in 2005 and Republic of Kalmykia in 2011 and from Turkmenistan in Central Asia in 1965, but none of those isolates contained the CTX prophage. L3b.1 isolates from Taiwan containing the CTX prophage ctxB3 allele were more distant.

Emergence of ST75 L3b.1 clade in South Africa is cause for concern. Recent studies on V. cholerae O1 isolated in Taiwan (12) and China (13) reported emerging and potential toxigenic ST75. Genomic signatures of these ST75 isolates closely resembled the US Gulf Coast V. cholerae O1 clone that emerged in 1973 (14). In particular, an investigation of V. cholerae O1 isolated during 2002–2018 in Taiwan showed that ST75 emerged there in 2009 and now is more prevalent than the ST69 pandemic clone (12). Our findings from South Africa align with the findings from Taiwan, showing that ST75 isolates outnumber ST69 isolates.

Epidemic 7PET lineage cholera demands an aggressive public health response to prevent outbreaks. In contrast, sporadic V. cholerae O1 infections mediated by other lineages, including those carrying toxin co-regulated pilus and CTX genes, typically are not epidemic-prone; most are associated with sporadic cases that rarely lead to secondary transmission (15). Tailoring the public health response to the degree of epidemic risk would be invaluable, especially in resource-limited settings. In countries that are not cholera-endemic but are at high risk for cholera introductions, conventional laboratory determination of V. cholerae O1, even complemented by identifying ctxA or ctxB genes, might be insufficient. Typing resolution of genomics, which distinguishes between 7PET and nonepidemic lineages, can elucidate the local and global epidemiology of cholera and inform public health decisions.

Dr. Smith is a principal medical scientist at the Centre for Enteric Diseases, National Institute for Communicable Diseases, Johannesburg, South Africa. He also holds an extraordinary professor appointment at the University of Pretoria, Pretoria, South Africa. His research interests include surveillance and epidemiology of enteric bacterial pathogens in South Africa.

This study was funded by the United Kingdom Department of Health and Social Care, managed by the Fleming Fund, and performed under the auspices of the SEQAFRICA project. The Fleming Fund is a £265 million aid program supporting <24 low- and middle-income countries to generate, share, and use data on antimicrobial resistance. The Fleming Fund works in partnership with Mott MacDonald, the Management Agent for the Country and Regional Grants and Fellowship Programme.

Page created: September 10, 2021
Page updated: October 19, 2021
Page reviewed: October 19, 2021
The conclusions, findings, and opinions expressed by authors contributing to this journal do not necessarily reflect the official position of the U.S. Department of Health and Human Services, the Public Health Service, the Centers for Disease Control and Prevention, or the authors' affiliated institutions. Use of trade names is for identification only and does not imply endorsement by any of the groups named above.