In December 2020, research surveillance detected the B.1.1.7 lineage of severe acute respiratory syndrome coronavirus 2 in São Paulo, Brazil. Rapid genomic sequencing and phylogenetic analysis revealed 2 distinct introductions of the lineage. One patient reported no international travel. There may be more infections with this lineage in Brazil than reported.

Genomic sequencing and analysis during the severe acute respiratory syndrome coronavirus 2 (SARS-CoV-2) pandemic have led to identification of ≈800 distinct SARS-CoV-2 lineages worldwide. A new phylogenetic cluster, B.1.1.7 lineage or variant of concern 202012/01, is characterized by 17 unique mutations and was first detected in southeastern England in late September 2020 (A. Rambaut et al., unpub. data, https://virological.org/t/preliminary-genomic-characterisation-of-an-emergent-sars-cov-2-lineage-in-the-uk-defined-by-a-novel-set-of-spike-mutations/563). As of January 17, 2021, this lineage had been confirmed in 38 countries (https://cov-lineages.org/global_report_B.1.1.7.html). Epidemiologic and phylogenetic studies suggest that the rapid epidemic growth of B.1.1.7 in the United Kingdom is caused by its higher transmissibility (E. Volz et al., unpub. data, https://www.medrxiv.org/content/10.1101/2020.12.30.20249034v2; N. Davies, unpub. data, https://cmmid.github.io/topics/covid19/uk-novel-variant.html), which could lead to increased incidence and higher peaks in hospitalizations and deaths (N. Davies, unpub. data, https://cmmid.github.io/topics/covid19/uk-novel-variant.html).

We confirm 2 cases of infection with SARS-CoV-2 B.1.1.7 lineage in Latin America. On December 30, 2020, we received saliva samples from 2 patients for genomic sequencing as part of research surveillance activities. Patient 1 was a woman 20–30 years of age residing in São Paulo, Brazil, who reported no travel outside of Brazil. Her symptoms began on December 21, and testing was conducted the next day. Patient 2 was a man 30–40 years of age who was tested in São Paulo on December 22 after having traveled from London on December 19. Ethics approval for this study was confirmed by the national ethics review board (Comissão Nacional de Ética em Pesquisa, protocol no. CAAE 30127020.0.0000.0068).

For each sample, we conducted nanopore sequencing in duplicate by using the ARTIC protocol (https://www.protocols.io/view/ncov-2019-sequencing-protocol-bbmuik6w). Concentrations of double-stranded DNA for the library-negative controls were below detection levels, indicating no contamination. We conducted whole-genome sequencing of SARS-CoV-2 by using the MinION platform (Oxford Nanopore Technologies, https://nanoporetech.com). By December 31, sequencing statistics revealed 56,565 mapped reads for patient 1 and 51,761 for patient 2. Consequently, 28,023 bases for patient 1 and 26,339 for patient 2 were covered at >25× depth. Consensus sequences covered 92.4% of the Wuhan Hu-1 reference genome (GenBank accession no. MN908947.3) for patient 1 and 87.1% for patient 2. For the 2 newly generated genome sequences, we identified the B.1.1.7 lineage (assignment probability = 1.0) by using the pangolin COVID-19 Lineage Assigner version 2.1.6 (2) (https://pangolin.cog-uk.io). The 2 genomes were made publicly available on GISAID (http://www.gisaid.org) on December 31, 2020 (identification nos. EPI_ISL_754236 for patient 1 and EPI_ISL_754237 for patient 2). 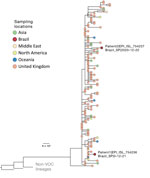 Figure. Phylogenetic context of novel severe acute respiratory syndrome coronavirus 2 B.1.1.7 genomes isolated from 2 patients in Brazil (labeled on figure), December 2020. Downsampling for the phylogenetic analysis of the...

We next estimated a rapid maximum-likelihood phylogenetic tree (3,4) for a multiple sequence alignment (5) with the new sequences and 127 publicly available B.1.1.7 genomes from around the world available on GISAID (6) as of December 31, 2020 (https://github.com/CADDE-CENTRE/VOC-Lineage-Brazil). The virus genome recovered from patient 1 grouped within a well-supported cluster (bootstrap 85%) of 10 sequences (60% from the United Kingdom) (Figure). This finding is consistent with the travel history of an asymptomatic family member who was positive for SARS-CoV-2 (according to a rapid test performed on December 23, 2020), who arrived in São Paulo on December 17 after traveling from Italy to the United Kingdom and, after a short stay, from London to São Paulo, and who was in close contact with patient 1. The sequence from patient 2 clustered with good statistical support (bootstrap 79.4%) with a sequence collected in the United Kingdom on November 27. Patient 2 had traveled from London to São Paulo on December 19 and was symptomatic when saliva was collected on December 22. Phylogenetic analysis suggests that this infection represents a second, independent introduction of the B.1.1.7 lineage from the United Kingdom to Brazil; patient 2 was not epidemiologically linked to patient 1.

Because information about this lineage from locations outside the United Kingdom is limited, our interpretations based on phylogenetic data might be biased by the different numbers of available genome sequences shared around the globe. Moreover, the samples that we analyzed were selected from only 2 cases confirmed by reverse transcription PCR in São Paulo; thus, our genomes were obtained from a small fraction of targeted spike-gene failure, and frequency of detection in our nonrandom sample does not represent prevalence of this lineage at the population level.

Despite temporary suspension of all flights to or from Brazil from or through the United Kingdom as of December 25, 2020 (https://www.gov.uk/foreign-travel-advice/brazil), it is likely that the number of SARS-CoV-2 lineage B.1.1.7 infections in Brazil is higher than that reported. Increasing genomic surveillance of B.1.1.7 and other variants of concern that carry mutations of potential biological significance (e.g., E484K in the spike protein; C.M. Voloch, unpub data, https://www.medrxiv.org/content/10.1101/2020.12.23.20248598v1) is imperative for monitoring vaccination effectiveness and contextualizing the epidemiology and evolution of SARS-CoV-2 in Latin America.

Mrs. Claro is a PhD student at the Department of Infectious Disease, School of Medicine & Institute of Tropical Medicine, University of São Paulo, São, Paulo, Brazil. She is a part of the Centre for Arbovirus Discovery, Diagnostics, Genomics and Epidemiology team and has primary research interests in real-time epidemiologic surveillance of viruses of public importance for Brazil.

We thank all researchers who are working around the clock to generate and share genome data worldwide on GISAID (http://www.gisaid.org). GISAID acknowledgment tables are available at https://github.com/CADDE-CENTRE/VOC-Lineage-Brazil.

Page created: January 20, 2021
Page updated: February 22, 2021
Page reviewed: February 22, 2021
The conclusions, findings, and opinions expressed by authors contributing to this journal do not necessarily reflect the official position of the U.S. Department of Health and Human Services, the Public Health Service, the Centers for Disease Control and Prevention, or the authors' affiliated institutions. Use of trade names is for identification only and does not imply endorsement by any of the groups named above.