The prevalence of antimicrobial resistance among Haemophilus spp. is a critical concern, but high-level quinolone-resistant strains had not been isolated from children. We isolated high-level quinolone-resistant H. haemolyticus from the suction sputum of a 9-year-old patient. The patient had received home medical care with mechanical ventilation for 2 years and had not been exposed to any quinolones for >3 years. The H. haemolyticus strain we isolated, 2019-19, shared biochemical features with H. influenzae. However, whole-genome analysis found this strain was closer to H. haemolyticus. Phylogenetic and mass spectrometry analyses indicated that strain 2019-19 was in the same cluster as H. haemolyticus. Comparison of quinolone resistance–determining regions showed strain 2019-19 possessed various amino acid substitutions, including those associated with quinolone resistance. This report highlights the existence of high-level quinolone-resistant Haemophilus species that have been isolated from both adults and children.

β-lactams and quinolones are commonly used to treat infections caused by both H. influenzae and H. haemolyticus. Recently, an increase in H. influenzae strains with reduced susceptibility to quinolones has been reported (9–11). Moreover, high-level resistant strains (MIC for levofloxacin ≥8 μg/mL) of H. influenzae have also emerged (12–15) but have been isolated only from adult case-patients (11,12). Recent nationwide surveillance in Japan indicated that quinolone-resistant H. influenzae had not been isolated among pediatric patients (16). Although low-susceptibility strains of H. haemolyticus have emerged, a high-level resistance strain had not been isolated from a pediatric patient (17). We isolated the H. haemolyticus strain 2019-19, which showed high-level resistance to quinolones, from a pediatric patient in an acute care hospital in Tokyo, Japan, and analyzed the features of the strain and case background of the patient.

A 9-year-old girl with severe motor and intellectual disabilities, hypothyroidism, and chronic respiratory disease was hospitalized for hypoxic ischemic encephalopathy in the Tokyo University of Hachioji Medical Centre (Tokyo, Japan). The patient had been under mechanical ventilation related to tracheostomy since she was 7 years of age and had not been administered any quinolones for >3 years before hospitalization. Because the patient had a fever with increased sputum production after 3 days of hospitalization, we obtained a suction sputum culture and administered ampicillin/sulbactam intravenously to her for 1 week. The patient was discharged because her fever resolved after 5 days of hospitalization.

We isolated H. haemolyticus (strain identification 2019-19) from the suction sputum and identified it as quinolone-resistant H. influenzae by routine laboratory testing using a MicroScan WalkAway system (Siemens, https://www.siemens.com). Because quinolone-resistant H. influenzae had never been isolated from a pediatric patient, we performed a detailed susceptibility test for 2019-19 by the broth microdilution method. For controls in the biochemical test, we used H. influenzae GTC 14202T (DSM 4690T) and H. haemolyticus GTC 15009T (NCTC 10659T) type strains purchased from Gifu University (https://www.gifu-u.ac.jp). In addition, we used H. influenzae ATCC 49247 and Rd as quality control strains for antimicrobial susceptibility testing. We cultured the isolates overnight on chocolate agar at 37°C in a 5% CO2 atmosphere and stored them in 10% skim milk at −80°C until use. This study was approved by the research ethics committees at the Tokyo University of Pharmacy and Life Sciences (case no. 16-12).

Because the genome sequence of the type strain was not available, we used H. haemolyticus NCTC 10839, along with H. influenzae ATCC 33391T, to compare the entire genomes with strain 2019-19, using Easyfig version 2.2.2 (19). We calculated the average nucleotide identity (ANIb) algorithm using BLAST (https://blast.ncbi.nlm.nih.gov/Blast.cgi) with JSpeciesWS (20) and digital DNA-DNA hybridization (dDDH) using the type strain genome server (21). In addition, we estimated the presence of CRISPR sequences and cas genes in the genome using the CRISPRfinder program (22).

We prepared samples by ethanol/formic acid extraction. One loop of bacteria was suspended in 300 μL distilled water and 900 μL of ethanol was added into the suspension. After centrifuging and discarding the supernatant, we mixed 20 μL each of 70% formic acid and acetonitrile. Next, we applied 1 μL of supernatant on the target plate and mixed it with 1 μL HCCA matrix (Bruker, https://www.bruker.com). We obtained the spectrum using a matrix-assisted laser desorption/ionization time-of-flight (MALDI-TOF) MS Bruker autoflex maX and analyzed the phylogenetic tree using MALDI Biotyper Compass Explorer version 4.1.60 (Bruker). 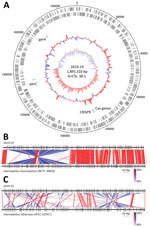 Figure. Genomic analysis of Haemophilus haemolyticusstrain 2019-19 from a 9-year-old girl in Japan. A) Circular map of the whole-genome sequence. The outermost circle shows the number of nucleotides, the...

To further characterize the 2019-19 strain in detail, we determined the whole-genome sequence by next generation sequencing (Figure). The genome size was 1,895,310 bp, comprising 1,764 protein-coding sequences, 19 rRNAs, 57 tRNA, and a CRISPR sequence (Figure panel A). Comparing the whole-genome sequence of 2019-19 with that of H. influenzae ATCC 33391T resulted in a dDDH score of 43.4% (95% CI 40.9%–46.0%) and ANIb score of 90.90%, suggesting an extremely low similarity. In contrast, although we observed a large inversion, we found 2019-19 comparatively strongly related to H. haemolyticus NCTC 10839 (Figure, panels B, C). The identity scores for 2019-19 with H. haemolyticus type strain ATCC 33390T were 64.1% (95% CI 61.2%–66.9%) for dDDH and 95.38% for ANIb, suggesting great similarity. To further clarify the genetic classification, we performed phylogenetic analyses using typical species housekeeping genes (16S DNA sequence, adk, pgi, recA, infB) and antimicrobial targeting genes (gyrA, gyrB, parC, parE, and ftsI) (Appendix Figure 1). In all phylogenetic trees using these genes, 2019-19 was classified in the same cluster as H. haemolyticus. In addition, 2019-19 contained a CRISPR sequence but not an IgA protease, which is a putative marker for distinguishing it from H. influenzae (data not shown) (8).

MALDI-TOF mass spectrometry analysis is one of the most reliable methods for identifying bacterial species (24,25). The bacterial protein profile was assayed to identify the bacterial species of 2019-19 using this method. In comparison with the database using MALDI Biotyper Compass Explorer version 4.1.60, 2019-19 matched with H. haemolyticus CCUG 12834T with a score 2.21 and was identified as H. haemolyticus. Furthermore, in a phylogenetic dendrogram drawn with representative type strains of Haemophilus spp. (Appendix Figure 2), 2019-19 was located close to the H. haemolyticus type strain ATCC 33390T.

Antimicrobial susceptibility testing of strain 2019-19 showed high MIC values (16 to ≥64 μg/mL) to levofloxacin, tosufloxacin, and moxifloxacin and susceptibility to antimicrobial agents including penicillins, cephems, and macrolides, but not to quinolones (Table 2). We investigated amino acid substitutions in quinolone-targeting proteins (GyrA, GyrB, ParC, and ParE) by comparing the sequences of H. haemolyticus CCUG 12834T or ATCC 33390T, NCTC10839, M19346, and M28486 (Table 3; Appendix Figure 3). The results revealed that 2019-19 had various amino acid substitutions in GyrA, GyrB, ParC, and ParE, including amino acid substitutions (Ser84Leu, Asp88Tyr in gyrA and Ser84Arg in parC) relevant to reducing susceptibility to quinolones (13,17). We measured the MICs of quinolones in the presence of the efflux pump inhibitors reserpine and PAβN to determine whether the efflux system affected quinolone resistance. There was no substantial difference in the presence or absence of inhibitors. To investigate the origin of this strain, we compared quinolone target genes among Haemophilus spp.; however, we obtained no evidence of recombination (data not shown).

We analyzed high-level quinolone-resistant H. haemolyticus strain 2019-19 isolated from a pediatric patient in an acute care hospital in Japan. The patient had several coexisting diseases and had been under tracheotomy for 2 years but had not been exposed to quinolone for the previous >3 years.

Comparative genome analysis, phylogenetic analysis using typical genes, and MALDI-TOF mass spectrometry analysis indicated that 2019-19 classified into the H. haemolyticus cluster rather than H. influenzae. Absence of IgA protease supported these results (8). In addition, this strain contained CRISPR sequences. Comparing genome sequences in the database, all H. haemolyticus contained CRISPR but H. influenzae sequences did not, which might support that this strain was H. haemolyticus. In contrast, 2019-19 shared biochemical features with H. influenzae. The biotype of 2019-19, biotype II, is the predominant type among H. influenzae and comparatively rare among H. haemolyticus (17,26,27), making it a notable feature of H. haemolyticus 2019-19. Previous studies reported that clinical isolates identified as H. influenzae occasionally included H. haemolyticus without hemolysis (6–8). The biochemical features of 2019-19 likely contributed to this misidentification. Genomic analysis showed 2019-19 contained a large inversion compared with other H. haemolyticus strains; however, the relationship of this inversion with biochemical features was not determined. Bacterial species defined by whole-genome sequence similarity have been reported to be ≈95%–96% ANIb (28) or 70% DDH (29). Although we tentatively identified 2019-19 as H. haemolyticus, these definitions and our ANIb and dDDH values suggest that this strain is a novel subspecies or species. The classification data for Haemophilus spp. are inadequate compared with those of other pathogens and species may need to be reclassified after additional genome and biochemical data are accumulated. Our findings can help improve the accuracy of classification and 2019-19 may be designated a novel subspecies or species in the future (6,30).

H. haemolyticus 2019-19 showed high-level quinolone-resistance and multiple amino acid substitutions in quinolone-targeting proteins, which are known to contribute to high-level quinolone resistance (12–14,17,31). In addition, quinolone-resistant H. parainfluenzae has been reported (32,33) in Taiwan and Europe and these isolates showed various amino acid substitutions in quinolone target genes, like those observed in 2019-19. Frequent use of quinolone can contribute to the emergence of resistant strains, and although this patient had not been exposed to any quinolones during the previous >3 years, she had frequently stayed in medical facilities and other antimicrobial agents had been used to treat her multiple coexisting diseases. Moreover, quinolones have been used for pediatric patients in Japan and the frequency of low-susceptibility strains of H. influenzae has been increasing (9,10,34). There may be selective pressure not only in hospitals but also in communities. In fact, 2019-19 contained a large inversion in the genome and partially differed from H. haemolyticus, suggesting substantial genetic recombination and rearrangement for this strain.

Among the study’s limitations, we analyzed only 1 high-level quinolone-resistant H. haemolyticus and its prevalence in both community and clinical settings remains unclear. In addition, there was no evidence about whether 2019-19 is a causative pathogen or commensal strain. However, the presence of high-level antimicrobial-resistant Haemophilus spp. in children should be noted, because even commensal bacteria can cause lethal infections in immunocompromised hosts.

Ms. Tanaka is a PhD student at Tokyo University of Pharmacy and Life Sciences. Her research interests are epidemiological trends and the antimicrobial resistance mechanism of Haemophilus species.

This work was partially supported by Sasakawa Scientific Research (grant no. 2020-4001) from the Japan Science Society (E.T.) and Nagai Memorial Research Scholarship (no. N-202604) from the Pharmaceutical Society of Japan (E.T.).

Page created: November 10, 2021
Page updated: December 22, 2021
Page reviewed: December 22, 2021
The conclusions, findings, and opinions expressed by authors contributing to this journal do not necessarily reflect the official position of the U.S. Department of Health and Human Services, the Public Health Service, the Centers for Disease Control and Prevention, or the authors' affiliated institutions. Use of trade names is for identification only and does not imply endorsement by any of the groups named above.