We describe 7 cases of extensive tinea corporis since 2018 in a hospital in Paris, France, after failure to cure with terbinafine. Molecular analysis indicated Trichophyton mentagrophytes internal transcribed spacer type VIII (T. indotineae). This strain, which has mutations in the squalene epoxidase gene, is spreading on the Indian subcontinent.

Dermatophytes are filamentous keratinophilic fungi responsible for superficial fungal diseases involving the skin, hair, or nails. On the basis of the site of the lesions, conditions are called tinea corporis, tinea cruris, tinea capitis, tinea pedis, or tinea unguium. Since the mid-2010s, difficult-to-treat cases of tinea corporis and tinea cruris have emerged in India; molecular analysis revealed that this clinical presentation was caused by a unique clade related to the Trichophyton mentagrophytes complex (1). Since 2018, we have observed several cases of clinically resistant tinea corporis with extensive lesions that do not respond to terbinafine, the preferred first-line treatment. We investigated the microbiological origin of this resistance by looking for mutations in the squalene epoxidase (SQLE) gene, which terbinafine targets, and determining the MICs of antifungal drugs. 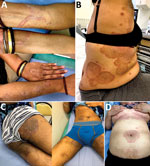 During January 1, 2018–December 31, 2019, we saw 2,282 patients for dermatophytosis at Hôpital Saint-Louis Parasitologie-Mycologie (Paris, France). Of these, 350 (15.3%) patients were positive for T. mentagrophytes complex, identified by macroscopic and microscopic phenotypical features. Seven (2.0%) patients, all of whom were either recent immigrants or born in a country on the Indian subcontinent and had traveled back to their birthplace in recent years, had clinically terbinafine-resistant tinea corporis (Table 1). The cutaneous lesions were often multiple and extensive and involved the groin, axillary pits, trunk, limbs, and face but spared the extremities and nails (Figure 1). The patients’ main complaint was intractable pruritus.

We analyzed the 7 clinically resistant T. mentagrophytes complex isolates and 8 control isolates from patients with terbinafine-susceptible clinical presentations of tinea (6 cases of tinea pedis or tinea unguium and 1 each of tinea faciei and tinea corporis) collected September 1–October 15, 2018. We sequenced the internal transcribed spacer (ITS) using ITS1 and ITS4 primers, which allowed us to ascribe the isolates to 1 of the 7 different genotypes of T. mentagrophytes or the 2 genotypes of T. interdigitale (2,3). We aligned sequences using Geneious Prime version 2020.0.4 software (https://www.geneious.com) and compared them using the Mycobank DNA database (https://www.mycobank.org).

We amplified the SQLE gene of all studied isolates using previously reported primer pairs (4). To ease the SQLE gene sequence analysis, we shortened the PCR products by designing 2 internal primers, SQLE-F2 (5′-[658]-TGGGGCCTGGAGCTTATAGA-[677]-3′) and SQLE-R2 (5′-[885]-CCTTCTCCAACGCAGCTTCA-[904]-3′). We compared our sequences to wild-type T. mentagrophytes complex reference sequence EZF33561 from GenBank (5) and submitted the new sequences to GenBank (accession nos. MW898018–32). We determined MICs as recommended (6). We obtained approval from the Commission Nationale de l’Informatique et des Libertés, the national data-protection agency in France (approval no. 903395), to ensure that patient data would be kept anonymous according to national regulations.

We describe a series of cases of tinea corporis in France caused by T. mentagrophytes complex ITS type VIII (3), which showed sufficient molecular and phenotypic differences to be recently individualized into a separate species called T. indotineae (7). Although its frequency is currently low (2.0% of all T. mentagrophytes complex isolates in our hospital), it is alarming because of the therapeutic failure we observed when using available antifungal drugs (8). T. indotineae is endemic to India (1) and Iran (2,9), but several cases have been reported in Germany (3), Denmark (6), Poland (10), Belgium (11), and Switzerland (12). These cases are mainly among persons, similar to our patients, returning from the Indian subcontinent. Direct human-to-human transmission is probable between family members in our study, as reported elsewhere (9) and in a couple reported in Switzerland (12). However, the possibility that the patients were contaminated from a common source cannot be excluded. Until now, 2 German-born residents have been reported infected despite not having traveled, generating fear of possible extension beyond the initial endemic focus area (3).

Thus far, 10 missense mutations in the SQLE gene have been previously proven in vitro to lead to elevated MICs for terbinafine by genetic manipulation (4,13). The F397L and L393S mutations observed in 5 of our patients have been frequently reported in India and Iran (1,2), as well as in Europe among travelers or migrants (3,4,8,10). A448T substitution was observed in 2 patients, for which both isolates had low terbinafine MICs, and 1 of them had high MICs for azoles, as reported elsewhere (3). With the generalization of sequencing, probability of identifying polymorphisms, such as the K276N substitution, increases (Table 2). These observations could be misleading if observed in clinically resistant isolates without performing formal genetic experiments. Moreover, mechanisms other than SQLE mutations have been reported that possibly explain in vitro resistance (14). As a consequence, identifying T. indotineae seems more clinically relevant than identifying the polymorphism in the SQLE sequence to predicting the failure of antifungal drugs. Without being able to identify the original reservoir of this dermatophyte, one suggestion is that mutations in SQLE and high MICs could be consequences of multiple previous treatments. Delays in seeking specialized medical advice for chronic cutaneous lesions are common, so improper use of topical steroids or over-the-counter medications for alternative diagnoses could favor the accumulation of mutations in the microorganism.

Once T. indotineae is identified, the challenge of curing the cutaneous lesions remains. After terbinafine failure, in the absence of contraindications, patients in our study were mainly treated with itraconazole, as recommended (3). The long-term success rate of itraconazole was very modest, even when an initial improvement was noted. When checked months after the end of azole treatment, at least 4 of the 7 patients still harbored clinical lesions, and the failure to cure was mycologically confirmed. Of course, every cofactor favoring dermatomycosis should be controlled or avoided when possible, including diabetes (2/7 patients in our study) or use of topical steroids (4/7 patients).

Our findings provide additional evidence of the spread of some dermatophyte species through travel and immigration, as has been evidenced by previously nonendemic T. tonsurans replacing other species as the etiologic agent of tinea capitis in children in the Paris area (15). Surveillance should focus more specifically on identifying T. indotineae than SQLE sequences or MIC testing. Optimal treatment when terbinafine resistance is demonstrated, given the high failure rate of itraconazole, remains to be established.

Dr. Dellière is a medical mycologist fellow at University Hospital Saint-Louis and a PhD candidate in the molecular mycology unit in the Pasteur Institute in Paris, France. Her primary research interests include diagnosis of, and resistance and host-pathogen interaction in mold infections. Dr. Joannard is a medical resident in clinical microbiology at public healthcare centers in Paris.

We thank Cécile Gautier, Dea Garcia-Hermoso, and Sarah Seng for their technical help. We thank all the clinicians who cared for the patients, especially P. Oberlin, B. Levy-Klotz, C. Viney, and C. Dommergues.

Page created: December 08, 2021
Page updated: December 20, 2021
Page reviewed: December 20, 2021
The conclusions, findings, and opinions expressed by authors contributing to this journal do not necessarily reflect the official position of the U.S. Department of Health and Human Services, the Public Health Service, the Centers for Disease Control and Prevention, or the authors' affiliated institutions. Use of trade names is for identification only and does not imply endorsement by any of the groups named above.