A fatal case of Mediterranean spotted fever associated with septic shock was reported in a 61-year-old man living in a village in southeastern Iran. The patient had a history of tick bite a few days before symptom onset. Phylogenetic analysis confirmed infection by Rickettsia conorii subspecies israelensis.

Mediterranean spotted fever (MSF) is a zoonotic disease caused by Rickettsia conorii. The main vector of this bacterium is the Rhipicephalus sanguineus tick (1); the main hosts of these ticks are domestic dogs, and humans are incidental hosts (2). MSF is endemic to the Mediterranean, Europe, Africa, western Asia, and India. The case-fatality rate is 3%–7% in hospitalized patients (3,4).

In 2017, human cases of MSF were reported in Kerman province in southeastern Iran (5). No data are available on the epidemiology of MSF in Iran; we report a fatal case of MSF associated with septic shock.

The patient was a 61-year-old man with a 10-year history of hypertension and rheumatoid arthritis who lived in a village in proximity to Bam County, Kerman province, Iran. He was a farmer, had no history of domestic animal-keeping, and reported contact with livestock and a tick bite a few days before symptom onset. The initial clinical signs of the disease appeared on September 6, 2019, and the patient was admitted to a hospital in Bam on September 9; symptoms were fever, nausea, vomiting, myalgia, urinary retention, and flank pain. The patient had scleral icterus, and a black skin eschar at the tick bite site and skin rash were visible on his left leg.

When the patient’s condition deteriorated, he was transferred to a hospital in Kerman on September 15. At admission, symptoms were septic shock, tachycardia, tachypnea, fever, and hypotension (85/50 mm Hg); he immediately began treatment with ceftriaxone, metronidazole, and parenteral hydration. Maculopapular skin rash was visible on the left leg. The patient had thrombocytopenia, and an increase was observed in leukocyte counts, renal factor levels (urea and creatinine), liver enzyme levels (aspartate aminotransferase, alanine transferase, and alkaline phosphatase), partial thromboplastin time of coagulation, and bilirubin levels (Table). Hemoglobin and hematocrit levels decreased, and the patient experienced hematuria and proteinuria; calcium oxalate and amorphous urate crystals were further reported in microscopic examinations. Treatment of prednisolone, heparin, doxycycline, and vancomycin was initiated.

On September 16, the patient was transferred to Afzalipour Hospital in Kerman (Referral Center for Infectious Diseases, Kerman Province). At the time of admission, the patient was conscious, his condition was stable, and his temperature was 37.6°C. No abnormalities were observed in clinical examinations of the heart, chest, and abdomen, but we noted bilateral lower extremity edema and left leg skin lesions (rash and eschar). The results of laboratory tests of blood and urine samples were abnormal (Table). The patient underwent emergency dialysis and continued to take prednisolone, heparin, doxycycline, and vancomycin. On September 17, the patient lost consciousness; he was subsequently intubated and admitted to the intensive care unit. A few hours later, he experienced septic shock and cardiac arrest and died. 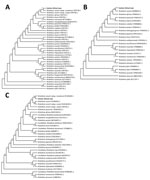 The differential diagnosis for this patient included MSF and Crimean-Congo hemorrhagic fever; on September 17, samples required for these differential diagnoses were prepared. Serum and blood samples were sent to the Pasteur Institute of Iran on September 25 (8 days after the patient’s death). Serologic and molecular test results for Crimean-Congo hemorrhagic fever were negative. Testing for R. conorii IgM by ELISA was borderline, and titer of R. conorii IgM by immunofluorescence assay was 1:48. Serum samples were positive for Rickettsia spp. (16S rRNA gene) by real-time reverse transcription PCR (6). On the basis of the amplification and sequencing of specific genes of Rickettsia spp. (gltA, GenBank accession no. MZ545594.1; 17KD, GenBank accession no. MZ545592.1; ompA, GenBank accession no. MZ545593.1), we confirmed infection by R. conorii subspecies israelensis (Figure).

The patient died as a result of late diagnosis of a rickettsial infection and subsequent septic shock, despite initiation of appropriate treatment. MSF is usually considered to be a mild disease, but severe and fatal cases do occasionally occur (7). One of the causes of death from MSF is multiorgan failure, including acute kidney injury, pneumonitis, and encephalitis. When severe, MSF can manifest as septic shock, and acute kidney injury might occur. Thrombocytopenia and elevated liver enzymes are frequent laboratory abnormalities (4,7).

MSF appears to be circulating in southern Iran but is a neglected disease that requires more attention from the healthcare system. Because of the nonspecific clinical symptoms of MSF, diagnosing the disease is challenging. Diagnosing and treating MSF early is critical to prevent progression to more severe illness (6). Further studies, particularly on elucidating potential reservoirs and vectors, will result in a better understanding of the epidemiology of this disease in Iran. In the meantime, MSF should be included in the differential diagnosis for patients in Iran who are experiencing fever and rash.

Dr. Esmaeili is an assistant professor and researcher in medical microbiology at Pasteur Institute of Iran. His primary research interest is emerging and reemerging bacterial pathogens, including Coxiella burnetii, Bartonella, Francisella, Rickettsia, and Yersinia pestis.

The work presented in this publication was supported by the Pasteur Institute of Iran and the Center for Communicable Diseases Control in the Ministry of Health (grant no. 810).

Page created: December 02, 2021
Page updated: January 22, 2022
Page reviewed: January 22, 2022
The conclusions, findings, and opinions expressed by authors contributing to this journal do not necessarily reflect the official position of the U.S. Department of Health and Human Services, the Public Health Service, the Centers for Disease Control and Prevention, or the authors' affiliated institutions. Use of trade names is for identification only and does not imply endorsement by any of the groups named above.