Avian influenza viruses remain major threats worldwide, responsible for multiple outbreaks among poultry and episodes of transmission to humans. During January 2003–February 3, 2022, there were 862 reported cases of human infection with avian influenza A(H5N1) virus in 18 countries, resulting in a 53% case-fatality rate (https://www.who.int/docs/default-source/wpro---documents/emergency/surveillance/avian-influenza/ai-20220401.pdf).

An 11-year old boy who had acute myeloid leukemia diagnosed in June 2021 in the department of pediatrics at the All India Institute of Medical Sciences (AIIMS) in New Delhi was brought in for treatment of fever, cough, coryza, and breathing difficulty in the first week of July 2021. The patient was a resident of Gurugram, National Capital Region (Delhi), India. His clinical work-up showed febrile neutropenia with pneumonia and shock, which progressed to acute respiratory distress syndrome, so he was mechanically ventilated. He then developed multiorgan dysfunction, which ultimately resulted in his death on July 12, 2021. An in-depth interview with family members indicated that the patient often frequented a family-owned poultry business and may have been exposed to birds with undetected infection, although no infected domestic or wild avian sources or any environmental contamination had been reported in or around the residence of the child.

Staff in The AIIMS department of pediatrics referred nasopharyngeal (NP) swab specimens collected on July 7 and bronchoalveolar lavage (BAL) fluid collected on July 11 to the department of microbiology for respiratory virus testing, which used a Fast Track Diagnostics Respiratory Pathogens 21 kit and real-time PCR for influenza (https://www.siemens-healthineers.com) for diagnosis. Both BAL and NP samples tested positive for influenza A and influenza B Victoria lineage. Influenza A type could not be determined, so we referred samples to the National Influenza Centre at the Indian Council of Medical Research of the National Institute of Virology (Pune, India) for differential influenza diagnosis. The real-time reverse transcription PCR for avian influenza viruses H5Nx, H7N9, H9N2, and H10N8 was performed as documented elsewhere (7,8); results were positive for an H5Nx virus (cycle threshold value for H5 was 25). To confirm the subtype A/H5 identity, short fragments of multiple genes were sequenced: 230-bp matrix, 400-bp hemagglutinin (HA), 600-bp neuraminidase (NA), 600-bp nonstructural), and the influenza B HA gene, and analyzed results were analyzed using BLAST (https://blast.ncbi.nlm.nih.gov/Blast.cgi). We isolated and identified strain A/India/NIV-SARI-4571/2021 (H5N1) at a Biosafety Level 4 laboratory using MDCK cells.

The sequences generated for the original clinical sample and the passaged virus were identical, suggesting no passage-induced mutations. We performed BLAST analysis of all 8 genes of A/India/NIV-SARI-4571/2021. The HA gene showed 97% identity with A/duck/Bangladesh/32003/2017 (H5N1). The polymerase basic (PB) 1 and nonstructural genes showed 97% nucleotide similarity to the avian influenza A/duck/Mongolia/729/2019 (H4N6) virus, suggesting probable reassortment. 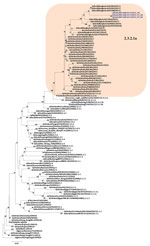 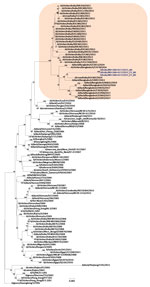 Phylogenetic analysis of the HA gene demonstrated that the virus belonged to clade 2.3.2.1a (Figure 1) and clustered with the A/duck/Bangladesh 2017 (H5N1)–like strain. Clade 2.3.2.1a has a H9N2-like PB1 gene and is the dominant clade in poultry in many countries, including Vietnam (9), India (3), Bangladesh, Bhutan, and Nepal (10). The NA gene clustered with an A/crow/India/01CA02/2014 (H5N1)–like strain (Figure 2). Phylogenetic trees indicate locations for the other 6 genes of the study strain (Appendix Figure 1).

We did not observe the NA and matrix 2 gene mutations responsible for neuraminidase inhibitors and amantadine resistance in the study strain. The virus remains purely avian-adapted, and we observed no markers for adaptation in mammals or pathogenicity for humans (Appendix Figure 2). We also did not observe PB2 hallmark mutations E627K and D701N, responsible for host adaptation and virulence in mammals in the study strain (12). The PDZ ligand domain (ESEV) at the C terminus remained conserved. We observed further compensatory mutations during the adaptation of H5N1 in mice, L89V, G309D, T339K, R477G, and I495V of PB2 (13) in the study strain. However, further studies are required to understand their role.

No evidence of H5 antibodies was detected in 18 close contacts of the deceased child. Available information and initial field investigations revealed that no additional cases were detected, indicating low human-to-human transmission. However, unreported high-pathogenicity avian influenza virus continues to exist in traded poultry in India, constituting a substantial risk for further human exposure (https://www.who.int/emergencies/disease-outbreak-news/item/human-infection-with-avian-influenza-a(h5n1)-%EF%BD%B0-india). Although widespread avian influenza outbreaks have been documented globally, only a limited number have shown transmission of avian influenza viruses to humans (14). The severe immunocompromised status of the child in this study may have made him vulnerable, and direct exposure to infected poultry might have been the source of infection. Influenza B virus, simultaneously detected with influenza A in this case-patient, is known to persist in such cases and might have been identified because of a prior infection (15).

In December 2020 and early 2021, outbreaks of avian influenza H5N1 and H5N8 were reported in poultry in 15 states in India; the National Capital Region, Maharashtra, Punjab, and Kerala, in particular, were severely affected. The whole-genome sequencing of A/India/NIV-SARI-4571/2021 (H5N1) virus in our study provides valuable insight into the absence of hallmark mutations responsible for adaptation and virulence in mammals. The strain remained sensitive to amantadine and neuraminidase inhibitors. However, identification of a human H5N1 case in India highlights the need for systemic surveillance at the human–animal interface level.

Dr. Potdar is senior scientist heading the National Influenza Centre at the National Institute of Virology, Pune, India. Her primary research interest is molecular characterization of influenza, SARS-CoV-2, and other respiratory viruses.

The authors acknowledge the National Centre for Disease Control, Delhi, for field investigation and Chakradhar Tosh from the Indian Council of Agricultural Research–National Institute of High Security Animal Diseases for sharing the serum samples of close contacts of the case. The authors from the National Institute of Virology, Pune, acknowledge Shailesh Pawar for sharing the serological protocols, the National Influenza Centre team for diagnosis, and the biosafety level 4 laboratory for sequencing and virus isolation and serology testing. The authors from AIIMS acknowledge the Department of Health Research and the Indian Council of Medical Research, Government of India, for supporting the virology laboratory as a regional laboratory under the Virus Research and Diagnostic Laboratory network.

Page created: April 11, 2022
Page updated: May 22, 2022
Page reviewed: May 22, 2022
The conclusions, findings, and opinions expressed by authors contributing to this journal do not necessarily reflect the official position of the U.S. Department of Health and Human Services, the Public Health Service, the Centers for Disease Control and Prevention, or the authors' affiliated institutions. Use of trade names is for identification only and does not imply endorsement by any of the groups named above.