Horse-Specific Cryptosporidium Genotype in Human with Crohn's Disease and Arthritis

We identified an unusual subtype of a Cryptosporidium sp. horse genotype as the cause of cryptosporidiosis in a 13-year-old girl in Poland who was undergoing immunosuppressive treatment for juvenile rheumatoid arthritis and Crohn’s disease. The same subtype was identified in a horse the girl had ridden.

Cryptosporidium spp. causes diarrheal disease that can become chronic and life-threatening in persons who have an immature or malfunctioning immune system. Humans are primarily infected with C. hominis and C. parvum (1), but can also be infected with other species and genotypes, including Cryptosporidium sp. horse genotype, which primarily infects horses and donkeys.

Molecular studies targeting the polymorphic 60-kD glycoprotein (gp60) gene have shown that humans and horses/donkeys are infected with different subtypes of the Cryptosporidium sp. horse genotype (2–4). We identified an unusual subtype of the Cryptosporidium sp. horse genotype as the cause of cryptosporidiosis in a 13-year-old girl receiving immunosuppressive treatment for juvenile rheumatoid arthritis and Crohn’s disease.

The Human Research Ethics Committee of Wroclaw Medical University approved use of diagnostic samples and corresponding patient data for this study (permit No. KB-24/2014). Written consent was provided by the parents of the child involved in the study.

The girl was being treated at the Wroclaw Medical University (Wroclaw, Poland) since 2009. On the basis of recommended criteria, she was given a diagnoses of rheumatoid arthritis when she was 3 years of age and Crohn’s disease when she was 5 years of age (5,6). She had received the immunosuppressant adalimumab since her rheumatoid arthritis diagnosis; that treatment continued after diagnosis of Crohn’s disease because of frequent relapses and lesions in the large bowel. In 2018, she was hospitalized because of recurrent gastrointestinal relapses, including diarrhea, fever (temperature >38.5°C), and abdominal cramps. Initial therapy included entocort (9 mg/d) and mesalizine (2,000 mg/d). 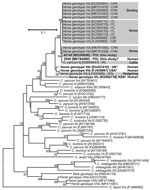 Figure. Maximum-likelihood tree based on partial sequences of 60-kD glycoprotein of Cryptosporidiumspp. from a 13-year-old immunocompromised girl and a horse she rode in Poland (and reference sequences. Bold and...

We used the small ribosomal subunit rRNA and gp60 genes (8), respectively, to identify Cryptosporidium to the species/genotype and subgenotype levels. We purified amplicons (QIAquickR; QIAGEN, https://www.qiagen.com) and directly sequenced them in both directions (SeqMe, https://www.seqme.eu). We repeated amplification and sequencing of each locus 3 times. We aligned nucleotide sequences by using references from GenBank and MAFFT version 7 (https://mafft.cbrc.jp/alignment/software) and performed phylogenetic analysis by using the maximum-likelihood method in MEGAX (https://www.megasoftware.net). Phylogenetic analyses of small ribosomal subunit rRNA and gp60 showed a Cryptosporidium sp. horse genotype belonging to the subtype family VIaA15G4 (Figure).

A follow-up medical interview showed that the patient rode a horse once per week at a riding stable; therefore, we collected fecal samples from all 10 horses at the stable and analyzed them for Cryptosporidium spp. None of the examined horses shed microscopically detectable Cryptosporidium oocysts or showed signs of cryptosporidiosis.

Crohn’s disease pathophysiology is closely linked to perturbations of the gut microbiome, but this disease and its causes remain poorly understood. Because of unexplained etiology, there is no specific treatment; immunosuppressive drugs are used to reduce inflammation, achieve remission, or prevent exacerbation. Immunosuppressive therapies cause increased susceptibility to opportunistic pathogens, such as Cryptosporidium spp., and limited data suggest that Cryptosporidium infection in inflammatory bowel disease (IBD) patients is not rare (9), despite protists being frequently overlooked in diagnostic testing. Manifestation of intestinal cryptosporidiosis might be confused with symptoms of Crohn’s disease and other IBD relapses.

The condition of the immune system is a critical determinant of the clinical course of Cryptosporidium infection. Despite immunosuppressive therapy, we observed complete clearance of the Cryptosporidium infection without specific treatment. In this regard, the infection was more similar to a case of self-limiting diarrhea in an immunocompetent person than to a chronic and life-threatening disease that is frequently associated with immunocompromised persons (10). Our findings suggest that the combination of Crohn’s disease and rheumatoid arthritis and immunomodulatory treatment might increase likelihood of infection with Cryptosporidium spp. that are not commonly infectious for humans.

In summary, we show the need for considering atypical sources of Cryptosporidium infection in persons with IBD who are undergoing immunosuppressive therapy. A necessary first step is to expand diagnostic testing of IBD patients to include opportunistic protists, such as Cryptosporidium spp. Once diagnosis is confirmed, genotyping of isolates can be used to help identify the source of infection, which is critical to preventing disease recurrence.

Dr. Zajączkowska is a research scientist in the Department of Biology and Medical Parasitology at Wroclaw Medical University, Wroclaw, Poland. Her primary research interests are opportunistic parasites, including microsporidia, Cryptosporidium spp., and Pneumocystis jirovecii, in humans and animals.

This study was supported by a Ministry of Health subvention (grant STM.A060.20.105) from the IT Simple System of Wroclaw Medical University and the Czech Science Foundation (grant 21-23773S).

Page created: April 11, 2022
Page updated: May 22, 2022
Page reviewed: May 22, 2022
The conclusions, findings, and opinions expressed by authors contributing to this journal do not necessarily reflect the official position of the U.S. Department of Health and Human Services, the Public Health Service, the Centers for Disease Control and Prevention, or the authors' affiliated institutions. Use of trade names is for identification only and does not imply endorsement by any of the groups named above.

Horse-Specific Cryptosporidium Genotype in Human with Crohn's Disease and Arthritis