Multiple introductions of SARS-COV-2 Omicron variant BA.1 and BA.1.1. lineages to Finland were detected in early December 2021. Within 3 weeks, Omicron overtook Delta as the most common variant in the capital region. Sequence analysis demonstrated the emergence and spread through community transmission of a large cluster of BA.1.1 virus.

The most recent SARS-CoV-2 variant of concern, Omicron (Pango lineage B.1.1.529), was first detected in South Africa (1), although it might have emerged elsewhere, and has since spread globally at an unforeseen speed. Notable examples include a superspreading event in Norway (2) and the rapid increase in incidence in Denmark (3) despite high vaccination coverage (83% of infected persons had received 2–3 vaccine doses). This rapid spread indicates the novel variant’s exceptional transmissibility, as well as its potential for reinfection and vaccination breakthrough. We describe the genotypes of cases of Omicron entering Finland from their early spread up to established community transmission through the first week of January 2022. No ethics approval was needed because this study was based on routine COVID-19 surveillance data. The study regarding Helsinki University Hospital (HUH) samples was approved by the local ethical and research committee (Helsinki and Uusimaa Hospital District [HUS]; Clinical microbiology of COVID-19: diagnostics, laboratory findings and biorisks; HUS/244/2021). 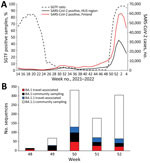 Figure 1. Introduction and spread of SARS-CoV-2 Omicron variant in Finland in late 2021–early 2022. A) Confirmed SARS-CoV-2 positives in Finland (red) and in the HUS region (black) and the proportion of...

We estimated the proportions of Omicron variant lineages BA.1 and BA.1.1 within HUS by comparing PCR-based data on S-gene target failure (SGTF) to that of other circulating lineages (Figure 1; Appendix). The results showed a decrease in SGTF rates from week 24, when the proportion of the Alpha variant (B.1.1.7) was declining, to near 0 when the Delta variant (B.1.617.2) was dominant. This decrease aligns well with sequence-confirmed lineage turnover reported elsewhere (4). Thereafter, the proportion of SGTF rose steeply from week 48 of 2021 until it reached 97% in week 2 of 2022 (Figure 1), indicating a rapid spread of the BA.1 and BA.1.1 lineages in the capital region of Finland.

The sequenced samples consisted of randomly selected population samples and samples collected at border entry (through airports, harbors, and land borders) to Finland (Table). In addition, a small proportion was preselected based on SGTF positivity (Appendix). Omicron sequence data consisted of 962 sequences, 33.4% of all sequenced samples (n = 3,100; ≈2% of all confirmed cases), during November 29, 2021–January 6, 2022. We collected 133 samples at points of border entry and recorded the number of patients in each hospital district, demographic distribution, and travel status (Table), including countries of origin for the travel-associated cases (Appendix). In addition, we added 15 Omicron sequences obtained from hospitalized patients in HUH to the sequence dataset (Appendix).

We identified Omicron cases in 5 travelers returning to Finland from Sweden through Denmark during November 29–30, 2021. All 5 members of the travel party, who lived in 3 different hospital districts (HUS, Hospital District of Southwest Finland, and North Savo Hospital District), were found to be Omicron positive through PCR testing and sequencing. The identified sequences clustered together with reference sequences mainly from Denmark and Sweden. However, introduction from this travel party did not lead to wide community circulation.

After the first introduction events, the number of weekly sequence-confirmed Omicron cases rose sharply during weeks 49 and 50 (Figure 1, panel B). Although weekly numbers of travel-associated (most likely imported) cases of lineage BA.1 did not differ from those for BA.1.1 (χ2 = 1.03; p = 0.5975), the proportion of BA.1.1 in the community samples was significantly higher than that of BA.1 (2-sample z-test, p = 0.0024, week 49 vs. week 50; (Appendix). We did not detect lineage BA.2. during the study period.

Our phylogenetic and clustering analysis (Figure 2) inferred 80 small, highly supported lineage BA.1 subclusters that contained sequences (n = 168) from Finland, as well as 47 BA.1 sequences that were singletons or from low-support clusters. For BA.1.1 sequences, the analysis inferred 129 clusters containing BA.1.1 sequences (n = 570) from Finland and 75 singletons. Of note, among BA.1.1 clusters, 1 cluster contained 236 identical sequences, 24.5% of all Omicron sequences from Finland recorded during the study period. These sequences were also identical to isolate HKU-344 (OM212473) from Hong Kong, collected November 27, 2021. These identical sequences were detected starting December 7 through the end of the study period. Most of these cases, 197/236 (83.5%), were detected in HUS, including the first 2 cases on December 7. Eleven of the sequences from this clade were imported, with the most likely countries of infection reported as Estonia (December 9, 2021), Sweden (December 15), and the United Kingdom, Spain, or Portugal (all December 20). An additional 8 cases were sampled at the border during December 15–21; 1 originated from Sweden, but no data were available about the country of infection for the other cases. Although the analysis of imported cases suggested that a virus of identical genotype was circulating in several European countries, locally acquired infections of this genotype were detected before the documented importation events.

We characterize the rapid increase in incidence of the SARS-CoV-2 Omicron variant in Finland. Specifically, our data suggest that BA.1.1 rapidly emerged as the dominant lineage over its parent, BA.1. The BA.1.1 lineage-defining R346K substitution in the spike protein has been suspected of increasing transmission rates more than the BA.1 lineage. This substitution, which occurred convergently in the Mu variant of concern, provides evidence of positive selection (1,5) and affects antibody binding (6). Although this mutation might provide an additional transmission advantage through enhanced immune-escape properties in a population, alternative options such as the founder effect cannot be ruled out for explaining the rapidly established dominance of this lineage in Finland.

Overall, Finland represents one of the countries with a rapid surge of Omicron variant BA.1.1 lineage introduced into a population largely vaccinated with 2 shots and within an epidemiologic landscape of increasing Delta circulation and absent or very low BA.2 circulation. These dynamics resulted in the dominance of BA.1.1 over both the Omicron BA.1 and Delta strains. Our study exemplifies the need for genomic surveillance and rapid detection of emerging SARS-CoV-2 lineages to support public health response and mitigation efforts.

Dr. Vauhkonen is a laboratory coordinator at the Department of Virology at the University of Helsinki, Finland. Her research interests include molecular epidemiology of viral zoonoses, next-generation sequencing, and bioinformatics.

We acknowledge CSC-IT Center for Science, Finland, for providing computational resources. Sequencing was performed by the FIMM Genomics NGS sequencing unit at the University of Helsinki, supported by HiLIFE and Biocenter Finland.

Page created: March 31, 2022
Page updated: May 22, 2022
Page reviewed: May 22, 2022
The conclusions, findings, and opinions expressed by authors contributing to this journal do not necessarily reflect the official position of the U.S. Department of Health and Human Services, the Public Health Service, the Centers for Disease Control and Prevention, or the authors' affiliated institutions. Use of trade names is for identification only and does not imply endorsement by any of the groups named above.