Genetic Epidemiology of Infectious Diseases in Humans: Design of Population- Based Studies 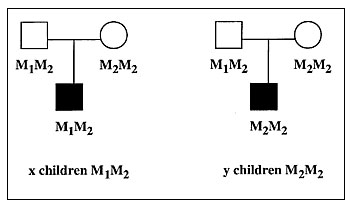 Figure 3. Principle of the transmission disequilibrium test (TDT) for investigating association between a disease and allele M1. The sample consists of x+y families with one affected child and two parents. For ease of presentation, we assume that only one parent is heterozygous for M1 (e.g., M1M2), although the second parent could be used for the test if he were himself heterozygous for M1. There are x affected children who have received allele M1 from their M1M2 parent and y who have received M2. The TDT statistic is simply (x-y)2/(x+y), which is distributed as a chi-square with one degree of freedom.