We modeled estimates of the incidence, deaths, and direct medical costs of Staphylococcus aureus infections in hospitalized patients in the New York City metropolitan area in 1995 by using hospital discharge data collected by the New York State Department of Health and standard sources for the costs of health care. We also examined the relative impact of methicillin-resistant versus -sensitive strains of S. aureus and of community-acquired versus nosocomial infections. S. aureus-associated hospitalizations resulted in approximately twice the length of stay, deaths, and medical costs of typical hospitalizations; methicillin-resistant and -sensitive infections had similar direct medical costs, but resistant infections caused more deaths (21% versus 8%). Community-acquired and nosocomial infections had similar death rates, but community-acquired infections appeared to have increased direct medical costs per patient ($35,300 versus $28,800). The results of our study indicate that reducing the incidence of methicillin-resistant and -sensitive nosocomial infections would reduce the societal costs of S. aureus infection.

The various ways of controlling MRSA (13) are still being debated. The elimination of endemic MRSA in hospitals is difficult and costly (14-17). In general, infection control in the United States is less stringent than in Canada and in some European countries, where identification of known carriers, prospective surveillance of patients and hospital workers, and use of nasal mupirocin have helped control drug-resistant S. aureus infection rates (18).

Knowledge of the scope of the problem is helpful for hospital administrators, insurers, and medical personnel who make policy decisions on control measures to prevent the spread of MRSA and the emergence of vancomycin-resistant S. aureus. However, the economic cost of S. aureus infections is not well known. Many studies focus on the cost of nonorganism-specific nosocomial infections (2,19,20). Moreover, the reported cost of a nosocomial infection varies because of the wide range of study populations, sites of infection, and methods used (16,21). The few investigations into the cost of S. aureus infections have focused on the differential cost of MRSA and MSSA infections (22,23) and are case studies of outbreaks in single hospitals. Thus, they do not provide perspective on the scope of the problem for a population over time.

We estimated the incidence, death rate, and cost of S. aureus infections associated with hospitalization in the New York City metropolitan area in 1995. We selected this geographic region because of its high prevalence of multidrug-resistant infections (24,25). We also compared the relative contributions of nosocomial versus community-acquired infections and methicillin-sensitive (MSSA) versus methicillin-resistant S. aureus.

We identified patients with the most common types of hospital-associated S. aureus infections: pneumonia, bacteremia, endocarditis, surgical site infections, osteomyelitis, and septic arthritis (Table 1) from SPARCS, which uses the International Classification of Diseases, Ninth Revision, Clinical Modification (ICD-9-CM) diagnosis codes (29). With the exception of ICD-9-CM code 482.4 (staphylococcal pneumonia) and 038.1 (staphylococcal septicemia), these codes are not organism-specific.

To identify S. aureus infections, we used the nonorganism–specific codes in conjunction with an additional ICD-9-CM code to identify the bacterial agent (i.e., 041.11 bacterial infection due to S. aureus in conditions classified elsewhere and of unspecified site). Patients with multiple infections were counted only once in the overall incidence rate. Their primary or first occurrence of a diagnosis of interest was used.

Direct medical costs were defined as hospital costs attributable to S.aureus infection, professional fees incurred during hospitalization, and costs of other infection-related medical services provided after discharge. For each infection, total direct medical costs were calculated by multiplying the average direct medical cost per patient by the incidence of disease. Average hospital costs attributable to S. aureus per patient were assumed to be equal to the average hospital charge from SPARCS when the infection (e.g., pneumonia, bacteremia) was coded as a primary diagnosis and 041.11 was used as a secondary diagnosis. Professional fees incurred during hospitalization include physician visits and consultations for evaluation and management, as well as radiologic, surgical, and anesthesiologic costs. The average frequency of physician services per patient was based on clinical panel estimates. Costs of these services were based on 1995 Medicare Payment Rates for the Long Island, New York, area as an intermediate point between New York City costs and those of outlying counties. Costs of medical services after discharge include those of postdischarge complications (e.g., abscesses, aneurysms) requiring rehospitalization, home-based intravenous antibiotic therapy, and outpatient oral antibiotic therapy. The average frequency of other medical services provided per patient was based on clinical panel estimates. Costs of hospital readmission were based on SPARCS charges; costs of home-based intravenous therapy were based on literature estimates (40,41); and costs of outpatient medications were based on average wholesale prices (25).

Of 1,351,362 nonobstetrical hospital discharges in SPARCS for New York City in 1995, an estimated 13,550 (1.0%) were discharges of patients with S. aureus infections (Table 4). The total direct medical costs incurred by these patients was an estimated $435.5 million—average length of stay nearly 20 days, direct cost of infection, $32,100 (Table 4). The number of deaths was estimated at 1,400 (a 10% death rate). In contrast, the hospital charges for the average hospital stay in SPARCS (for all nonobstetrical discharges) were $13,263—average length of stay 9 days, death rate 4.1%. Thus, patients with S. aureus infection had approximately twice the cost, length of stay, and death rate of a typical hospitalized patient.

Pneumonia and bacteremia represented most S. aureus infections and accounted for 60% of the total direct medical costs and 97% of the number of deaths. Endocarditis caused the longest stay (26 days) and highest direct cost per patient ($47,200); surgical site infection caused the shortest stay (14 days) and lowest direct cost per patient ($21,810). Hospital charges were an average of $29,000 (90% of the total costs); professional fees were an average of $2,300 (7%); and postdischarge costs represented $800 (3%) (Table 5).

Although assumed to be underused in SPARCS, the ICD-9-CM code 041.11 represents a lower boundary of the total incidence of S. aureus infection. In SPARCS, code 041.11 was used 7,366 times associated with a diagnosis of interest (e.g., endocarditis) and represented a total cost of $236.4 million and a death rate (740 deaths) of 2% (Table 7). The upper boundary of the total cost of S. aureus infections was calculated by assuming that all hospital charges and deaths of patients with S. aureus infections were attributable to the infection, representing a total cost of $599 million and a death rate of 14.5% (1,960 deaths). We conducted sensitivity analyses (varying the percentage of nosocomial MRSA; percentage of patients isolated; difference in length of stay between patients with MRSA and MSSA; attributable length of stay for patients with ventilator-associated pneumonia; number of S. aureus catheter infections; and percentage of S. aureus–caused bacteremia, septicemia, and postoperative infections) and found that the difference in cost per case between MRSA and MSSA infections was $1,700 to $5,100.

Our sensitivity analysis shows that we did not vastly over- or underestimate the direct medical costs of S. aureus infections in New York City. However, the study had several limitations; it was retrospective, and the data sources were not validated by other means (e.g., interviews or chart review). Therefore, coding errors in this database may affect the results. The clinical panel estimates we used to model differences between MRSA and MSSA may lead to some inaccuracy in those difference estimates. Thus, our comparison of costs and deaths between MRSA and MSSA should be viewed as a best approximation in the absence of case-control data or a multivariate analysis of a well-defined patient population.

Our estimates of the cost per infection are generally higher than estimates in studies reviewed by Jarvis (19). A major reason may be our focus on New York City, where costs are much higher than in other areas of the United States. In addition, earlier studies have used only hospital costs. Our perspective was societal; therefore, we included physician fees and outpatient costs, as well as hospital charges. Finally, most of these studies focused on nonorganism-specific nosocomial infections; S. aureus infections may have a higher average cost per episode than infections of other organisms (42). On the other hand, we used conservative estimates for certain costs. Medicare prices for professional services are generally lower than commercial rates. Also, we did not account for postdischarge complications that did not lead to hospitalization. Additionally, our societal estimates did not include the cost of dying or lost productivity associated with these illnesses. Despite its limitations, this study shows that hospitalizations associated with S. aureus are serious and have high medical costs and death rates. The average length of stay attributable to S. aureus infection for these patients was very high, 20 days—nearly three times the average for any other type of hospitalization (43). The increased length of stay in turn leads to increases in direct medical costs, with an average cost per case of $32,100 in 1995.

Treating an MRSA infection costs 6% to 10% more than treating an MSSA infection ($2,500 to $3,700 per case). This cost difference does not reflect MRSA's greater virulence; rather, it reflects the increased cost of vancomycin use and isolation procedures (if used). These estimates are slightly lower than the difference of $5,104 found by Wakefield et al. (21), perhaps because they focused on the cost of serious S. aureus infections, while our analysis examined all hospitalizable S. aureus infections. Patients with MRSA infections have a high average attributable death rate of 21% versus 8% for an MSSA infection. Some of the death rate difference may be related to the underlying condition of patients who become infected with MRSA (e.g., older patients, drug users, sicker patients, patients previously exposed to other antibiotics) (44) and to the lack of effectiveness of vancomycin itself in curing MRSA. (Vancomycin has a narrow therapeutic index that allows little room for increasing blood concentration without incurring substantial losses in tolerance [45]). Both MSSA and MRSA infections are associated with high costs and large numbers of deaths in the New York City metropolitan area. The costs and deaths associated with S. aureus infections may dramatically increase if the newly isolated S. aureus infection with intermediate resistance to vancomycin spreads or if VRSA emerges. For example, after penicillin-resistant S. aureus appeared in the 1950s, the death rate of bacteremia increased from 28% to 50% at the University of Minnesota (Figure) (46). After methicillin was introduced, the death rate decreased (47). Efforts should be directed toward reducing the incidence of MRSA and MSSA nosocomial infections to reduce their economic impact on society. 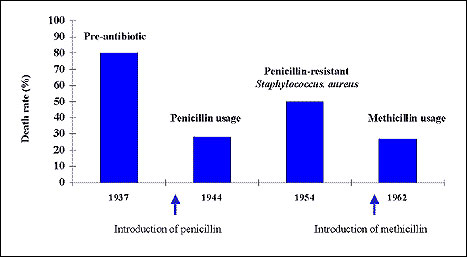 Death rate of staphylococcal bacteremia over time. (Data from 46, 47.)

This study was sponsored by the Public Health Research Institute in conjunction with the Bacterial Antibiotic Resistance Group and The Rockefeller University. Funders included The New York Community Trust, The Horace W. Goldsmith Foundation, The United Hospital Fund of New York City, The Texaco Foundation, and the U.S. Centers for Disease Control and Prevention. Dr. Rubin, president of The Lewin Group, a Washington-based health-care consulting company, is a clinical professor of medicine at Georgetown University School of Medicine. From 1981-1984, he was assistant surgeon general in the U.S. Public Health Service and assistant secretary for planning and evaluation, U.S. Department of Health and Human Services. Address for correspondence: Robert J. Rubin, The Lewin Group, 9302 Lee Highway, Fairfax, VA 22031-1214, USA; fax: 703-218-5501.