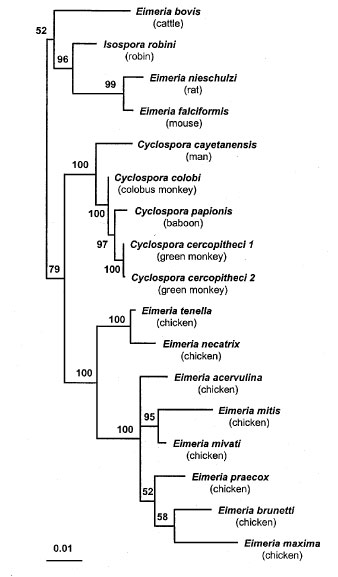 Figure. Phylogenetic tree for small subunit ribosomal RNA sequences of Cyclospora and Eimeria species. Quartet puzzling maximum likelihood results are shown, with Toxoplasma gondii as the outgroup. After analysis, the outgroup branch was removed for clarity. Numbers to the left of the nodes indicate the quartet puzzling support for each internal branch. The scale bar indicates an evolutionary distance of 0.01 nucleotides per position in the sequence. Vertical distances are for clarity only. GenBank accession numbers of the sequences used for analysis: Cyclospora cayetanensis, AF111183; C. cercopitheci 1, AF111184; C. cercopitheci 2, AF111185; C. colobi, AF111186; C. papionis, AF111187; Eimeria acervulina, U67115; E. bovis, U77084; E. brunetti, U67116; E. falciformis, AF080614; E. maxima, U67117; E. mitis, U40262; E. mivati, U76748; E. necatrix, U67119; E. nieschulzi, U40263; E. praecox, U67120; E. tenella, U40264; Isospora robini, AF080612; and Toxoplasma gondii, U12138. The sequences were aligned with the program CLUSTALW (20). Phylogenetic analysis was done with the maximum likelihood method-based PUZZLE program (21), as well as with the parsimony method-based PAUP program (22). Unreliably aligned regions were removed, and the final length of the alignment was 1692 columns. Aligned sequences are available from the authors upon request.  1Initially, we used a nested PCR protocol using primers CYCF1E and CYCR2B for the first step of the amplification and primers CYCF3E and CYCR4B for the second step (11). Samples were also amplified by using sets of PCR primers designed on the basis of the primers described above, but with the restriction sites removed. The primer CYCF1 (5'-ATTACCCAATGAA AACAGTTT- 3') was used in pairs with the primer CYCR4 (5'-TCGTCTTCAAACCCCCTACTG-3') to generate a DNA fragment of 577 bp. The other pair of primers, CYCF3 (5'-GCCTTCCGCGCTTCGCTGCGT-3') and CYCR2 (5'-TGC AGGAGAAGCCAAGGTAGG-3') was used to generate a fragment of 283 bp. To generate fragments spanning the full length of the SSU-rRNA coding region, we used generic apicomplexan PCR primer CRYPTOF (5'-AACCTG GTTGATCCTGCCAGT-3'), specific for the 5' end of the SSU-rRNA molecule and the apicomplexan generic PCR primer CRYPTOR (5'-GCTTGATCCTTCTGCAGGTTCACC TAC-3'), specific for the 3' end of this molecule. These generic primers were combined with the Cyclospora-specific primers (CYC-series, see above) to amplify overlapping fragments spanning the whole SSU-rRNA molecule. PCR products were analyzed by electrophoresis on 2% SeaKem GTG agarose (Cat. No. 50074, FMC Bioproducts, Rockland, ME), stained with ethidium bromide and visualized on a UV transilluminator.