We report a second case of laboratory-confirmed infection caused by Rickettsia mongolotimonae in Marseille, France. This rickettsiosis may represent a new clinical entity; moreover, its geographic distribution may be broader than previously documented. This pathogen should be systematically considered in the differential diagnosis of atypical rickettsioses, especially rashless fevers with lymphangitis and lymphadenopathy, in southern France and perhaps elsewhere.

Rickettsia mongolotimonae (1) was first obtained as isolate HA-91 from Hyalomma asiaticum, a tick collected in Inner Mongolia in 1991 (2). The first evidence of R. mongolotimonae pathogenicity in humans was obtained in our laboratory in 1996 in a woman who had an atypical tick-transmitted disease. This second case of R. mongolotimonae infection was unexpected, especially because the symptoms in the second case differed from those of the first case and of other rickettsioses cases. 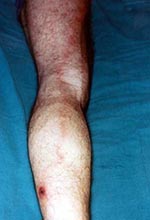 Figure. Lymphangitis expanding from the inoculation eschar on the left leg to an enlarged, painful lymph node on the left groin of a patient with Rickettsia mongolotimonae infection.

On May 19, 1998, a 49-year-old HIV-positive man was admitted to a hospital in Marseille, France, with fever and myalgias for 5 days. The patient, who had been HIV positive since 1988, was being treated with a combination of zidovudine, lamivudine, and nevirapine. With this therapy, he had been asymptomatic for 5 years. His CD4+ lymphocyte count was 503μl, and his plasma viral level was 5,916 copies per ml (3.77 log). He was a gardener who lived in a rural area 40 km from Marseille and had contact with animals, including cats, rabbits, squirrels, and birds. On May 8, 1998, he worked in his garden but did not notice any tick bites. On examination the day of admission, he had an eschar (tache noire) surrounded by an inflammatory halo on his left leg. He had a fever of 39°C, chills, headache, and myalgias. A lymphangitis expanded from the inoculation eschar to the left groin, where a painful satellite lymphadenopathy was observed (Figure). Clinical examination was otherwise normal. Laboratory results were unremarkable. An acute-phase serum sample drawn that day was sent to our laboratory, along with a biopsy of the eschar. Although the patient had no rash, Mediterranean spotted fever was suspected. After 15 days of treatment with 200 mg per day of doxycycline, the symptoms resolved. A second serum sample was collected on May 26.

Microimmunofluorescence testing was performed (3). Although the first serologic test was negative, the second serum sample had low titers to R. mongolotimonae and R. conorii (1:16 for immunoglobulin [Ig] G and 1:16 for IgM). The eschar sample was spread onto human embryonic lung fibroblasts by the centrifugation shell-vial technique (4). After 7 days incubation at 32°C, a Gimenez staining of methanol-fixed human embryonic lung fibroblasts cells showed Rickettsia-like bacilli. DNA was extracted from the ground eschar biopsy and from 200μL of shell-vial supernatant, by using a QIAmp Tissue kit (QIAGEN GmbH, Hilden, Germany) according to the manufacturer's instructions. These extracts were used as templates with primers complementary to portions of the coding sequences of the rOmpA, citrate synthase, and 16S rRNA encoding genes in three polymerase chain reaction (PCR) assays (5). The base sequences of the obtained PCR products were determined (5). All sequences shared 100% similarity with R. mongolotimonae when compared with GenBank data.

In the only reported case of R. mongolotimonae infection in France, migratory birds carrying ticks were hypothesized to be responsible for transmitting the infection, as R. mongolotimonae had been isolated only from ticks from China (1). On the basis of this hypothesis, the initial case was thought to be a unique imported infection. However, the occurrence of a second case in the same area suggests that the disease may be more common than expected around Marseille. R. mongolotimonae was initially isolated from Hyalomma asiaticum ticks in China, but its reservoir in our area is unknown. However, the fact that the patient worked in a garden near cypress trees where numerous birds nested suggests that migratory birds should be considered a possible source. We were unable to detect this bacterium by using ompA PCR-amplification and culture in 540 Rhipicephalus ticks from the Marseille area; these ticks are prevalent in southern France (8,9). An active search for the vector of R. mongolotimonae, which may be a rare tick species in Southern France, should be conducted.

The symptoms of both patients occurred in spring, which is unusual for Mediterranean spotted fever (1). The symptoms of the first patient were like those of Mediterranean spotted fever, except that the rash was discrete. The second patient had no rash but had lymphangitis, expanding from the inoculation eschar to the groin, and a painful lymphadenopathy. These differences in clinical symptoms may be explained by the HIV-positive status of this patient. Two cases are inadequate to describe a disease; however, our preliminary data suggest that R. mongolotimonae infections may have a discrete rash or no rash, along with lymphangitis and satellite lymphadenopathy.

This second case of R. mongolotimonae infection is important for several reasons. First, this rickettsiosis may represent a new clinical entity. Second, the geographic distribution of the illness may be broader than previously documented. R. mongolotimonae should be systematically considered in the differential diagnosis of atypical rickettsioses in southern France, especially fevers without rash but with lymphangitis and lymphadenopathy, in southern France and perhaps elsewhere.

Dr. Fournier is a physician in the French reference center for the diagnosis and study of rickettsial diseases. His research interests include the clinical and epidemiologic features of the rickettsioses.