and Blanca I. Restrepo† 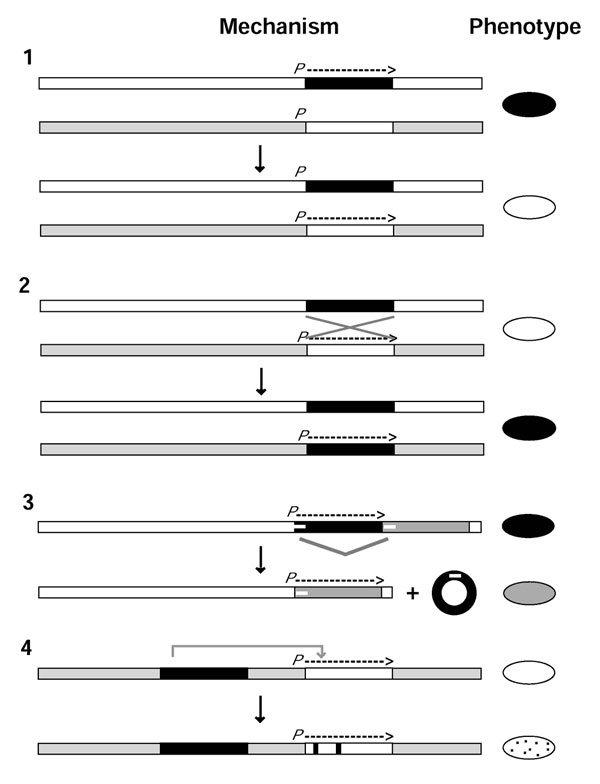 Figure 2. Four genetic mechanisms for antigenic variation in a hypothetical pathogen. 1. Modification of transcript levels. Two loci are shown in the figure for black and white genes. When the black gene promoter (P) is silenced and the white gene promoter is activated (arrow), the phenotype of the pathogen changes from black to white. No genetic change occurs at either locus. 2. Gene conversion. Two loci are shown for black and white genes: the white gene is at the expression site with a promoter, and the cell phenotype is white. In the switch, the black gene sequence is the donor that converts the expression site locus, and as a consequence the phenotype changes to black. 3. DNA rearrangement. In one locus with a tandem pair of variable antigen genes, black and gray, a recombination between direct repeats (small white boxes) at the 5' ends of the genes results in deletion of the black gene as a nonreplicative circle and the rearrangement of gray gene to a position immediately downstream of the promoter. The cell phenotype changes from black to gray. 4. Multiple point mutations. A single region of the genome contains an active white gene and an archived black gene at some distance 5' to it. The black gene provides donor sequences for two short conversion patches in the white gene. The phenotype of the cell remains white, but there may be several amino acid differences between this mutated white gene and the original white gene.