A nested polymerase chain reaction assay was used to determine the presence of Ehrlichia chaffeensis, E. canis, and E. ewingii DNA in blood samples of free-ranging coyotes from central and north-central Oklahoma. Of the 21 coyotes examined, 15 (71%) were positive for E. chaffeensis DNA; none was positive for E. canis or E. ewingii. Results suggest that E. chaffeensis infections are common in free-ranging coyotes in Oklahoma and that these wild canids could play a role in the epidemiology of human monocytotropic ehrlichiosis.

Human monocytotropic ehrlichiosis, a tick-borne zoonosis caused by the rickettsial pathogen Ehrlichia chaffeensis (Rickettsiales: Ehrlichieae), occurs primarily in the southern, south-central, and mid-Atlantic regions of the United States (1,2). The principal vector is the lone star tick, Amblyomma americanum (L.), and associations between the presence of the tick and the occurrence of human ehrlichiosis have been documented (1). The principal wildlife reservoir is the white-tailed deer (Odocoileus virginianus) (3,4). Indeed, site-specific geographic and temporal associations have been made between the presence of A. americanum and E. chaffeensis antibodies in deer (5,6). No other wildlife species has been incriminated in the epidemiology of this disease, although serologic reactivity was detected in free-ranging raccoons (Procyon lotor) and opossums (Didelphis virginianus) from Georgia (5) and white-footed mice (Peromyscus leucopus) from Connecticut (7). Additionally, red foxes (Vulpes vulpes) have been shown to be susceptible to infection under experimental conditions (8). Although some rodents have been experimentally infected with this pathogen (9), research findings about natural infections in wild rodent populations have been inconsistent (7,10). Domestic dogs are susceptible to both natural and experimental E. chaffeensis infections (11–13).

To determine whether free-ranging coyotes (Canis latrans) serve as a reservoir host for E. chaffeensis, E. canis, or E. ewingii, we used a nested polymerase chain (PCR) assay to survey for the presence of DNA of these organisms in blood samples from 21 free-ranging coyotes from central and north-central Oklahoma. Coyotes were obtained as part of animal damage control (U.S. Department of Agriculture) from an area in the established range of A. americanum (14,15), in which E. chaffeensis was endemic in deer and E. chaffeensis, E. canis, and E. ewingii had been found in dogs (13,16). Immediately after the coyotes were shot, EDTA-anticoagulated whole blood was collected for isolation of DNA for PCR assay. Blood samples were stored at 4oC until processing. DNA was isolated from whole blood (200 l) with the QIAamp Blood Kit (Qiagen, Santa Clarita, CA), according to the manufacturer's instructions. 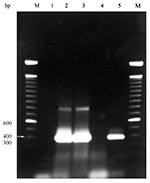 Purified DNA from each blood sample was tested in four PCR amplifications by using primers HE1, HE3, EE5, and ECAN5 (12,13,17); reaction conditions are described in the Figure. For DNA sequencing, PCR reactions were performed, and products were separated by agarose gel electrophoresis. Bands were stabbed multiple times with sterile pipet tips, which were placed into PCR reaction mix as template (19). PCR reactions were pooled and purified by using Qiagen Qiaquick PCR purification kit, according to manufacturer's instructions. DNA was sequenced at the Oklahoma State University Recombinant/DNA Protein Research Facility (Stillwater, OK) using an Applied Biosystems (Foster City, CA) 373A automated DNA sequencer. Sequences were analyzed with MacVector software (Oxford Molecular Group, Inc., Campbell, CA). A partial sequence (300 bp) from each end of the 390-bp amplified fragment was determined for both the E. chaffeensis-positive control and one positive coyote. The sequences obtained here were compared to those previously deposited in GenBank (13) to verify that E. chaffeensis DNA was amplified.

Of the 21 coyotes tested, 15 were positive by PCR assay for E. chaffeensis (Figure); none was positive for E. canis or E. ewingii. To our knowledge, this is the first reported evidence of natural E. chaffeensis infection in a coyote and the first PCR-based evidence in a free-ranging mammal other than white-tailed deer. Although these findings do not question the importance of white-tailed deer in the endemic maintenance of E. chaffeensis, they do point to coyotes as potential reservoir hosts.

All stages of A. americanum feed readily on coyotes (14,20). Moreover, white-tailed deer and coyote populations overlap in much of the E. chaffeensis-A. americanum disease-endemic regions of the United States (1,21–24). Movement of these deer, as indicated by their home range (usually not exceeding 1.6 km [25]) is more restricted than that of coyotes (whose range may exceed 31 km [22]). These behavioral factors, and coyotes’ apparent susceptibility to infection with E. chaffeensis, make them an ideal bridge species for the spread of this tickborne pathogen among wild species as well as a source of infection for ticks that may subsequently feed on other hosts, including humans and domestic animals.

The results of this study, although based on a limited number of free-ranging coyotes, suggest that in the geographic range of the study, coyotes likely play little or no role in the endemic maintenance or spread of other species of Ehrlichia that commonly parasitize domestic dogs or humans. Coyotes are susceptible to experimental infection with E. canis (26), and domestic dogs and ticks from Oklahoma have been shown to be naturally infected with both E. canis and E. ewingii as well as E. chaffeensis (13). In fact, E. ewingii DNA was recently identified from patients in Missouri, which expands the known host range of this organism, making it a newly emerging zoonosis of public health concern (27).

Dr. Kocan is a professor in the Department of Veterinary Pathobiology at Oklahoma State University, College of Veterinary Medicine. His research interests include infectious and parasitic diseases of free-ranging wild animals and vector-borne diseases of wild, domestic, and human hosts.

We thank J. Lilley and D. Alley for their assistance in obtaining coyotes.

This research was supported in part by Animal Health Grant No. 1433 and project 3714 of the Agricultural Experiment Station and the College of Veterinary Medicine, Oklahoma State University.