Cryptosporidium parasites cause infection in humans and other vertebrates. Two genotypes of Cryptosporidium parvum are responsible for most cases of human infection; the human genotype (genotype 1 or anthroponotic genotype) is found almost exclusively in humans, whereas the bovine genotype (genotype 2 or zoonotic genotype) is found in both ruminants and humans (1–4). In addition to zoonotic and person-to-person transmission, both genotypes of C. parvum have caused waterborne and foodborne outbreaks. Current genotyping tools permit only differentiation of Cryptosporidium parasites at the genotype level, which limits ability to track infection and contamination sources in outbreaks.

Two double-stranded (ds) extrachromosomal viruslike RNAs have recently been identified in C. parvum (5). Both ds-RNAs have been found in all C. parvum oocysts examined. Sequence analysis of both the small and large ds-RNAs from seven C. parvum human genotype isolates and five bovine genotype isolates showed distinct ds-RNA sequences in isolates from the same genotype (6), indicating that ds-RNA has potential as a subgenotyping tool for Cryptosporidium. We report sequence diversity in the small ds-RNA of C. parvum human and bovine genotype isolates and discuss the usefulness of this technique for laboratory investigations and for tracking the source of cryptosporidiosis outbreaks.

We sequenced the small ds-RNA of 61 C. parvum isolates (23 isolates from cattle and 38 from humans) (Table). Eighteen of the 38 human isolates were from two foodborne outbreaks (Spokane, Washington, 1997; and Washington, D.C., 1998) and one waterborne outbreak (Minnesota, 1997) with well-defined infection sources (7–9). These isolates had been genotyped by polymerase chain reaction (PCR)-restriction fragment length polymorphism analysis of the SSU rRNA and TRAP-C2 genes (10,11). All bovine isolates and the human isolates from the Minnesota outbreak were of the C. parvum bovine genotype, and the other human isolates were of the C. parvum human genotype (Table). Total nucleic acid was extracted from purified oocysts or oocyst-containing fecal materials by the phenol-chloroform method (11) and stored at -20°C before molecular analysis.

A 173-bp fragment of small ds-RNA was amplified by reverse-transcription (RT)-PCR with the GeneAmp RNA PCR Core kit (PE Applied Biosystems, Foster City, CA), according to the manufacturer's protocol. Random primers were used, and the nucleic acid was preheated at 65°C for 30 min. An aliquot (2 µL) of the RT mixture was used for PCR. The primers used were 5'-TGCAGTTTACTATCCAGTGG-3' and 5'-GCAGAAGGGTTCTATGATTC-3', and the PCR conditions were those described by Khramtsov et al. (5). PCR products were sequenced on an ABI 377 Automated Sequencer (Perkin Elmer, Foster City, CA). Sequence accuracy was confirmed by two-directional sequencing and sequencing of a second RT-PCR product. Nucleotide sequences from all isolates were aligned, and the relationship between isolates was assessed by unweighted pair group method with arithmetic means, by using the Wisconsin Package Version 9.0 (Genetics Computer Group, Madison, Wis.).

Figure 1. Sequence diversity in the 173-bp fragment of double-stranded RNA of Cryptosporidium parvum. Dots denote nucleotides identical to the KSU-1 isolate of the C. parvum bovine genotype. Representative sequences for each subgenotype...

Eighteen distinct nucleotide sequences were obtained from the 61 isolates, dividing the 23 isolates of C. parvum bovine genotype into 8 subgenotypes (A,B,C,D,F,G,H, and M) and the 38 isolates of the human genotype into 10 subgenotypes (E,I,J,K,L,N,O,P,Q, and R). Subgenotype A sequence was identical to that obtained from the laboratory isolate KSU-1, whereas others showed 1 to 13 bp differences from KSU-1 at 17 positions over the 173-bp fragment of the small ds-RNA. Isolates of the C. parvum bovine genotype generally had more similarity in small ds-RNA sequences to KSU-1 (subgenotype A) than those of the C. parvum human genotype. However, no nucleotide changes indicative of the genotypes (bovine or human) were present in the 173-bp fragment (Figure 1). 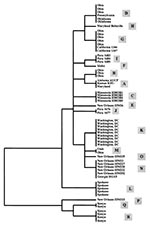 Subgenotyping tools are needed for studies of the molecular epidemiology of cryptosporidiosis. Such tools would facilitate laboratory characterization of cryptosporidiosis outbreaks and identification of contamination and infection sources. Analysis of the variations in subgenotype occurrence may also shed light on the transmission dynamics of Cryptosporidium parasites in different geographic areas and epidemiologic settings. The extensive intragenotypic heterogeneity in the small ds-RNA sequence exhibited by isolates of the C. parvum bovine and human genotypes indicates that ds-RNA has potential as a high-resolution tool for subgenotyping Cryptosporidium parasites.

Our analysis of outbreak specimens illustrates the potential utility of subgenotyping tools for epidemiologic investigations. The waterborne outbreak in Minnesota affected children who played around a water fountain in a zoo (7). All four isolates had the same subgenotype (C), confirming that the children's infections came from the same source. In the foodborne outbreak in Spokane, which affected attendees at a holiday party (8), all five isolates analyzed had the subgenotype L sequence of the C. parvum human genotype, supporting the epidemiologic conclusion of a single source. The outbreak in Washington, D.C., was attributed to contamination of food by a food handler who had symptomatic cryptosporidiosis in the week before the outbreak (9). As in the other outbreaks, all eight isolates were of the subgenotype K of the C. parvum human genotype, again confirming a common source. Analysis of a sample (HDC14) from the food handler demonstrated a small ds-RNA sequence identical to those from the outbreak cases, providing further evidence that the food handler was the likely source of the oocysts that caused the outbreak.

The presence of multiple subgenotypes at the same geographic location, the wide distribution of certain subgenotypes, and the apparent geographic segregation of some subgenotypes seen in this preliminary study highlight the complexity of cryptosporidiosis epidemiology. The two subgenotypes of C. parvum in Kenya were quite divergent from isolates from other areas, which suggests localized transmission cycles. This hypothesis is further supported by the predominance of one subgenotype (N) in New Orleans AIDS patients. However, the presence of four subgenotypes (B,D,G, and M) of the C. parvum bovine genotype in calves in central Ohio suggests that multiple C. parvum parasites of the same genotype can circulate simultaneously in a region. Both phenomena may occur in any given locality, leading to the pattern seen in eight specimens from AIDS patients in New Orleans, where five specimens were subgenotype N and the other three specimens were of three different subgenotypes. Analysis of more isolates from diverse locations is needed for a firm extrapolation of data.

A disadvantage of the ds-RNA subgenotyping tool is lack of specificity at the genotype level. Perhaps as a result of the use of a short fragment as the target, this technique does not distinguish the two genotypes of C. parvum and must therefore be used in combination with routine genotyping tools. Initial attempts targeted longer fragments of the large and small ds-RNAs. However, the RT-PCR that targeted longer fragments in amplifying samples of the C. parvum human genotype was much less efficient, probably because of sequence diversity at the primer regions and lower efficiency of reverse transcription of longer fragments. A recent sequence analysis by Khramtsov et al. of five isolates of the C. parvum bovine genotype and seven isolates of the human genotype consistently separated the two genotypes in both the large and small ds-RNAs (6). It remains to be determined whether these primers and others can be developed for sensitive genotyping and subgenotyping Cryptosporidium parasites.

Dr. Xiao is a senior staff fellow in the Division of Parasitic Diseases, CDC. His research interests focus on the molecular epidemiology of enteric protozoans and malaria vaccine development.

This work was supported in part by funds from the Food Safety Initiative, Centers for Disease Control and Prevention.

Page created: March 17, 2011
Page updated: March 17, 2011
Page reviewed: March 17, 2011
The conclusions, findings, and opinions expressed by authors contributing to this journal do not necessarily reflect the official position of the U.S. Department of Health and Human Services, the Public Health Service, the Centers for Disease Control and Prevention, or the authors' affiliated institutions. Use of trade names is for identification only and does not imply endorsement by any of the groups named above.