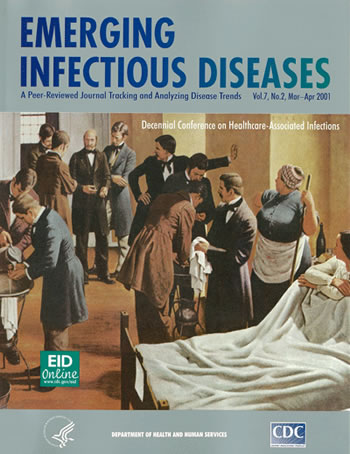 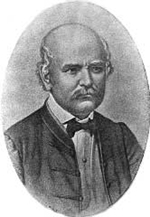 Ignaz Philipp Semmelweis (1818-65) (Figure), a Hungarian obstetrician educated at the universities of Pest and Vienna, introduced antiseptic prophylaxis into medicine.

In the 1840s, puerperal or childbirth fever, a bacterial infection of the female genital tract after childbirth, was taking the lives of up to 30% of women who gave birth in hospitals. Women who gave birth at home remained relatively unaffected. As assistant professor on the maternity ward of the Vienna General Hospital, Semmelweis observed that women examined by student doctors who had not washed their hands after leaving the autopsy room had very high death rates. When a colleague who had received a scalpel cut died of infection, Semmelweis concluded that puerperal fever was septic and contagious. He ordered students to wash their hands with chlorinated lime before examining patients; as a result, the maternal death rate was reduced from 12% to 1% in 2 years. Nevertheless, Semmelweis encountered strong opposition from hospital officials and left Vienna in 1850 for the University of Pest.

As a professor of obstetrics at the University of Pest Hospital, he enforced antiseptic practices and reduced the death rate from puerperal fever to 0.85%. However, Semmelweis findings and publications were resisted by hospital and medical authorities in Hungary and abroad. After a breakdown, he entered a mental hospital in Vienna, where he died of an infection contracted during an operation he had performed.

Page created: May 29, 2012
Page updated: May 29, 2012
Page reviewed: May 29, 2012
The conclusions, findings, and opinions expressed by authors contributing to this journal do not necessarily reflect the official position of the U.S. Department of Health and Human Services, the Public Health Service, the Centers for Disease Control and Prevention, or the authors' affiliated institutions. Use of trade names is for identification only and does not imply endorsement by any of the groups named above.