Traditional and Molecular Techniques for the Study of Emerging Bacterial Diseases: One Laboratory’s Perspective 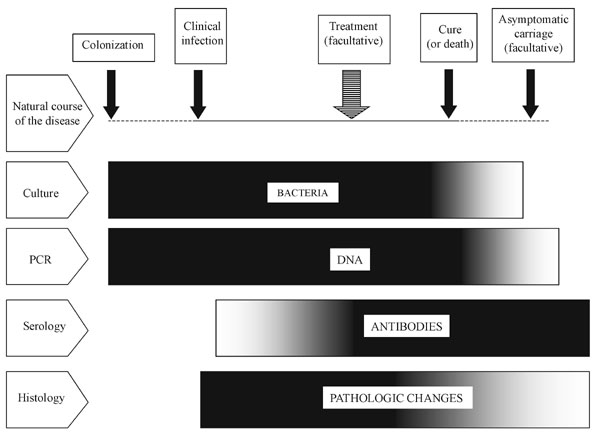 Figure 1. . Diagram describing the respective places of culture-, polymerase chain reaction-, serology- and histology-based approaches for the diagnosis of acute bacterial infections, according to the natural course of the disease. Isolation and culture are possible as long as live bacteria are present in tissues, i.e., from the colonization to the treatment or to the end of the clinical manifestations (or shortly earlier). Bacterial DNA can be detected during the same period and also as far as dead microorganisms remain in tissues. Specific antibodies appear during the clinical course of the disease and persist generally for months or years. Pathologic changes can be observed soon after the contamination and, in an acute infection, will decline rapidly after elimination of the bacteria.

Page created: April 18, 2012
Page updated: April 18, 2012
Page reviewed: April 18, 2012
The conclusions, findings, and opinions expressed by authors contributing to this journal do not necessarily reflect the official position of the U.S. Department of Health and Human Services, the Public Health Service, the Centers for Disease Control and Prevention, or the authors' affiliated institutions. Use of trade names is for identification only and does not imply endorsement by any of the groups named above.