We describe a case of Cryptosporidium muris infection in an HIV-infected adult with diarrhea in Kenya. Sequence analysis of an 840-bp region of the 18S rRNA gene locus demonstrated the isolate had 100% nucleotide identity with C. muris recovered from a rock hyrax, 98.8% with a C. muris “calf” isolate, 95.5% with C. serpentis, but only 87.8% with C. parvum “human” type.

Tyzzer identified the first Cryptosporidium species, C. muris, in the gastric glands of mice (1). Thereafter, he identified C. parvum, which infects the small intestines of many mammals, and described the complete coccidian life cycle. Over the next 70 years, more than 23 different species of the genus were described on the basis of their morphology and natural hosts. However, when animals were experimentally infected, many of the described Cryptosporidium species were found to be identical. In the 1970s the classification was revised, and today only six to eight species are recognized as valid, with most human, zoonotic, and mammalian infections being attributed to the different C. parvum genotypes (2,3). C. muris, which is naturally a murine parasite, appears to have a more limited host range than C. parvum. Experimental transmission studies of C. muris have shown that the isolate from laboratory mice can infect other animals, including dogs, guinea pigs, rabbits, lambs, and gerbils, although it did not produce patent infections (4). The parasite has also been isolated from a rock hyrax (Procavia sp.) from a zoo and a Bactrian camel with chronic cryptosporidiosis (3,5). For many years, the parasite was thought to infect cattle; however, recent studies have shown that the C. muris that infects cattle is genetically distinct, and a new species name, C. andersoni, has been suggested (6).

Conventional diagnostic methods for Cryptosporidium do not differentiate the various species and genotypes, and most infections are diagnosed as C. parvum. C. parvum “human” and “bovine” genotypes remain the main causes of human cryptosporidiosis, but lately identification of infections with other genotypes and also Cryptosporidium species other than C. parvum has increased in both immunosuppressed and immunocompetent persons (7–10). Possible asymptomatic human infection with C. muris was reported in two healthy girls in Indonesia (11). Morphologic studies on the oocysts showed they were most likely to be C. muris, although there was no genotypic or experimental animal confirmation. Phylogenetic analysis has enabled more conclusive assignment to species and genotypes infecting humans and other animals (12,13). We report a case of C. muris infection, confirmed by morphology and genotyping, in an adult HIV-infected man from Kenya, hospitalized with diarrhea.

Fecal samples were collected from diarrheal patients from a hospital in Nairobi, Kenya, as part of a larger study. The patient described was an HIV-infected man who had clinical tuberculosis and diarrhea. Isospora belli was also detected in a fecal sample from the patient.

The fecal samples were preserved in both sodium acetate formalin and 2.5% potassium dichromate and kept at 4°C. They were stained with Kinyoun’s carbol fuchsin modified acid-fast stain and examined by oil immersion microscopy . An aliquot of 400 μL of the sample suspension in 2.5% potassium dichromate was processed for genotypic analysis. Potassium dichromate was washed 5 times with cold, distilled water until the yellow color cleared. Oocysts were ruptured by freeze-thaw, and DNA was extracted by using a QIAamp DNA Mini Kit (Qiagen, West Sussex, UK)) for stool DNA purification as per protocol.

Microscopic examination of the acid-fast stained fecal smear revealed ovoid oocysts that were an average size of 7.5-9.8 x 5.5-7.0 μm (Figure 1). Cysts of I. belli were also identified in the stained smear. 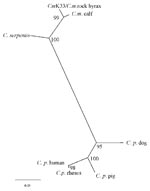 The resulting sequence 18S r RNA gene fragment of the C. muris human isolate was deposited in the EMBL Nucleotide Sequence Database (Accession no. AJ307669). Sequence analysis with ClustalX showed this human C. muris isolate had a 100% nucleotide identity to that of a C. muris isolate from a rock hyrax and a Bactrian camel (EMBL Accession no. AF093498, AF093497), 98.8% identity to a C. muris “calf” isolate (AF093496), 96.5% with C. serpentis (AF108866), and only 87.8% identity to C. parvum human type (AF093489). C. muris calf isolate (AF093496) has since been shown to be a different species from C. muris (“mouse” type, Accession no. AF093498 ) and has been given a new name, C. andersoni. The phylogenetic tree showed topology similar to that already published for Cryptosporidium, with C. parvum clustering in one clade, and our patient’s sample and published sequences of C. muris (rock hyrax isolate), C. andersoni (calf isolate), and C. serpentis clustered in another group (Figure 2).

Our study used genotypic analysis to confirm microscopic detection of Cryptosporidium oocysts in fecal samples and indicated that C. muris can indeed infect humans. Although immunosuppression has been observed to produce an increased susceptibility to cryptosporidiosis, the range of Cryptosporidia that can cause human cryptosporidiosis is still being elucidated (8,13,15). Lately, novel genotypes and non-C. parvum species such as C. meleagridis , C. felis, and C. parvum “dog” type have been identified not only in HIV-infected persons but also in HIV-uninfected patients (7,9,10). Genotypic analysis of Cryptosporidium organisms in fecal samples in the United Kingdom showed the occurrence of C. meleagridis, C. felis, and C. parvum “dog” type in immunocompetent and immunosuppressed persons (10,16). In another study in Peru, C. felis, C. parvum “dog” type, and C. meleagridis were identified in children not infected with HIV. In that study, C. meleagridis was as common as C. parvum “bovine” type; it appeared to be a stable part of the enteric pathogen mix causing cryptosporidiosis, perhaps only being identified with current definitive molecular methods (9).

C. muris infects the gastric glands of immunocompetent or immunocompromised (nude and SCID) mice (17); however, since our patient was co-infected with I. belli, the role of C. muris in our patient’s gastroenteritis and its possible site of infection in this patient are unclear.

A report of possible asymptomatic C. muris infection in healthy persons (11) and our finding of it in an immunosuppressed patient suggest that this may be yet another Cryptosporidium species with a zoonotic potential. The range of animal reservoir hosts in which C. muris has been identified or experimentally transmitted adds to the importance of Cryptosporidium species as a public health concern (3,4,15). The current genotypic analyses are making it possible to make more conclusive diagnoses and to speculate on possible sources of infection (14–16). These techniques will need to be applied more widely to identify and characterize isolates of Cryptosporidium for more definitive epidemiologic mapping.

Gatei Wangeci is a Commonwealth Universities Scholar, working toward a doctorate in parasitology in the Tropical and Medical Schools, University of Liverpool. She qualified in veterinary medicine in 1987 and since then has worked at the Kenya Medical Research Institute in Nairobi as a veterinary parasitologist.

We thank Winifred Dove, F.B. Kiliku, and Dr. Njeri Wamae for their assistance.

The study is part of doctoral research grant to Wangeci Gatei from the Association of Commonwealth Universities at the Liverpool School of Tropical Medicine, United Kingdom.