Amphibian chytridiomycosis is an emerging infectious disease of amphibians thought to be moved between countries by trade in infected amphibians. The causative fungus, Batrachochytrium dendrobatidis, produces aquatic, motile zoospores; infections have been achieved in experiments by exposing amphibians to water containing zoospores. However, the ability of this fungus to survive in the environment in the absence of an amphibian host is unknown. We show that B. dendrobatidis will survive in tap water and in deionized water for 3 and 4 weeks, respectively. In lake water, infectivity was observed for 7 weeks after introduction. The knowledge that water can remain infective for up to 7 weeks is important for the formulation of disease control and quarantine strategies for the management of water that has been in contact with amphibians.

B. dendrobatidis is an aquatic organism with two life stages: a sessile, reproductive zoosporangium and a motile, uniflagellated zoospore released from the zoosporangium. Frogs can be experimentally infected by zoospores of B. dendrobatidis (11,12) or by contact with skin harvested from infected animals (2). No resting stage has been identified for B. dendrobatidis in laboratory culture, and whether one occurs in nature is unknown as yet (13). The organism does not survive desiccation (11), so infected amphibians have been identified as the major means in which B. dendrobatidis could be moved within and between countries. Amphibians carrying B. dendrobatidis have been detected in the pet trade in the United States (14), Europe (4), and Australia (15); in frogs for scientific purposes, particularly Xenopus laevis and X. tropicalis (16–18); and in frogs for food, particularly Rana catesbiana (19). B. dendrobatidis has been hypothesized to have been introduced into new areas by movement of infected amphibians or in contaminated water or soil containing zoospores, but little is known about the epidemiology of amphibian chytridiomycosis (15,20,21).

Water was collected from three sources in Townsville, North Queensland: deionized water, tap water collected from the chlorinated reticulated supply, and lake water from a 1-hectare lake in the suburb of Hyde Park. All water was then autoclaved at 121°C for 15 min. In duplicate 25-cm2 culture flasks (TPP, CSL Biosciences Ltd., Australia) containing each of the three water types, we added approximately 1 x 105 spores/mL of 98-1810/3 of B. dendrobatidis, obtained from a wild adult of Nyctimystes dayi from Tully, Queensland, in 1998, or B. dendrobatidis strain 98-1469/10 isolated from a captive juvenile Limnodynastes dumerilii from the Amphibian Research Centre, Melbourne, Victoria, in 1998. Strains have been maintained by serial passage in TGhL broth (16 g tryptone, 4 g gelatin hydrolysate, 2 g lactose in 1,000 mL distilled water) approximately every week. Flasks containing water were held at 23°C in an incubator and observed during a 10-week period by using an inverted Olympus microscope (Olympus Optical Co., Ltd., Tokyo, Japan). Evidence of growth included attachment of inoculated zoospores, change in size and form of zoosporangia, and release of new zoospores into the water. Signs of viability included movement of free zoospores in the water or movement of zoospores inside the zoosporangia. From weeks 2 to 7, when activity of zoospores was no longer visible and growth appeared to have ceased, 0.5 mL of water from each flask was added into flasks containing TGhL media and incubated at 23°C. These newly inoculated cultures were then observed for growth and activity, with the observations terminating at week 10. 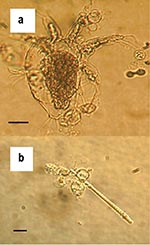 Figure. Zoosporangia of strain 98-1810/3 visible as transparent spherical bodies growing in lake water on (a) freshwater arthropod and (b) algae. Bars = 30 μM.

The duration of survival of B. dendrobatidis in water varied with the source of the water and the strain of fungus (Table). For all three water samples, zoospores attached to the plastic of the flasks and grew into zoosporangia, but new zoospores appeared to be released only into the lake water. After 1 week in tap and deionized water, no further growth of zoosporangia or activity by zoospores was apparent. However, viability of B. dendrobatidis was demonstrated in tap water until week 3 by growth of both strains on addition into culture media. For deionized water, viability of strains differed with growth on inoculation into culture media up to week 3 and week 4 for 98-1810/3 and 98-1469/10, respectively. The lake water contained dead microscopic algae, arthropods, protozoa, and plant debris, and zoosporangia were attached to these organic bodies as well as to the plastic of the flask (Figure). Growth of zoosporangia was apparent at week 1, and motile zoospores of both strains were present in lake water cultures for 1 to 7 weeks. However, during this period, no activity of zoospores was apparent at times. Subcultures from lake water into TGhL broth showed viability to week 6 and week 3 for the strains 98-1810/3 and 98-1469/10, respectively.

Zoospores of B. dendrobatidis were highly active when placed into all three types of water and progressively attached to the flask to form sessile zoosporangia. With routine culture in nutrient media, zoosporangia release zoospores into the medium mature as they mature. This cycle continues until the culture becomes overgrown and inhibition of growth occurs, possibly as nutrients become limiting or metabolic waste products accumulate. One cycle of normal growth for both these strains of B. dendrobatidis takes up to 5 days at optimum temperatures and nutrient conditions. However, in low nutrient conditions, such as exists in tap, lake, and distilled water, growth is inhibited and the life cycle takes longer to complete. To allow for a slower life cycle, observations were continued for 10 weeks. In our study zoospores developed to zoosporangia in all three water types, but new zoospores were not released in two of the three water types, tap water, and deionized water. Previous research had indicated that B. dendrobatidis did not survive well in distilled water (11). However, this study confirmed that the absence of activity by zoospores, or growth of new zoosporangia, is not a reliable indicator of a nonviable or dead culture. Zoosporangia may be able to survive in a state of arrested or nondiscernible development for a long period in environments not conducive to growth, and on inoculation into nutrient broth, the life cycle may then recommence. Results from inoculation of TGhL broth showed that B. dendrobatidis in tap water remained viable for 3 weeks. In deionized water strain 98-1810/3 survived for 3 weeks and strain 98-1469/10 survived 4 weeks. B. dendrobatidis in lake water was more successful: both strains were able to release new zoospores, or less likely, the original zoospores were capable of surviving for extended periods.

We presume that the longer survival time of B. dendrobatidis in lake water could be due to the higher level of nutrients and possibly the nonliving organic substrate offered by algae and other microorganisms. Attachment and growth of zoosporangia on skeletons of algae and invertebrates support this theory. However, no evidence of digestion of these bodies by the chytrid was visible. Repeated observations (Figure a) did not show any appearance of degradation. We do not know the effect of these microorganisms, if alive, on the growth and survival of B. dendrobatidis. Autoclaved water was used because of the limitations of our current culture system. Although active zoospores of both strains were observed in lake water cultures after 7 weeks, no growth occurred when subcultured into TGhL. Low numbers of zoospores were present. Therefore, when aliquots were removed to inoculate TGhL broth, zoospores may not have been included. Alternatively, zoospores may have been subject to osmotic shock when transferred from water to broth. B. dendrobatidis grows best when clusters of zoospores form (13), and too few may have survived inoculation to successfully establish a new culture.

Dr. Johnson is a researcher in the Amphibian Diseases Group at James Cook University, Townsville, Australia. Her research interests include parasitology, particularly of humans and amphibians, and molecular biology.

Dr. Speare is deputy head of the School of Public Health and Tropical Medicine, James Cook University, Townsville, Australia. His research interests include diseases of wildlife, particularly of wild amphibian populations, and control of communicable diseases in humans and animals.

We thank Dr. Lee Berger for providing the strains used in this study.