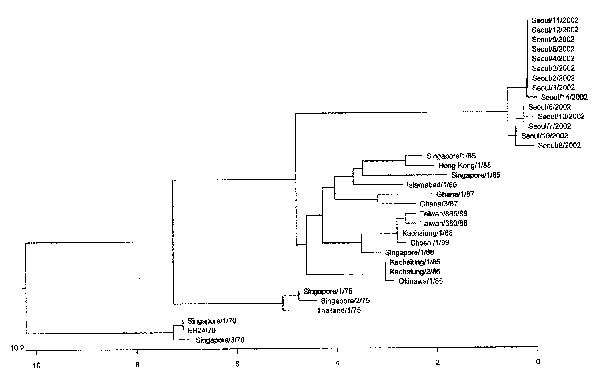 Figure. Phylogenetic analyses of the 14 isolates of coxsackievirus A24 variant (CA24v) from the South Korean outbreak of acute hemorrhagic conjunctivitis, summer 2002. The entire protease 3C region (549 nucleotides) of CA24v was amplified by polymerase chain reaction and sequenced. The nucleotide sequences of this region of the 14 Korean isolates were compared with those of the strains reported from other Asian countries in previous outbreaks. The phylogenetic tree was constructed by the unweighted pairwise grouping method of the arithmetic average. (GenBank accession nos. for the 14 Korean isolates are AY216777–AY216790.)