A 61-year-old man was bitten by a tick at Lake Woblitz, near the town of Neustrelitz in former East Germany, on May 31, 2004, between 8:00 a.m. and 4:00 p.m. The patient’s history showed no other tick bites, no stays in tickborne encephalitis–endemic areas, and no tickborne encephalitis vaccination.

On June 9, transient fever and headache developed in the patient, followed 6 days later by difficulty in concentrating, apathy, and a strong urge to sleep. On June 23, the patient was hospitalized with fever (temperature 39.2°C) and mental confusion. Because he had cruised the Nile in December 2003, he was transferred to the Tropical Medicine Division of Rostock University to exclude a diagnosis of malaria. Somnolence, slurred speech, amnestic dysphasia, and impaired fine motor control, but no meningism, focal signs, pyramidal tract, or sensation impairment, were observed. Results of magnetic resonance imaging brain scan and electroencephalogram were normal.

Laboratory tests showed leukocytosis of 9,400 leukocytes/μL and lymphocytopenia of 12%. Alpha-amylase was 254 U/L, lipase 84 U/L, sodium 131 mmol/L, and fibrinogen 4.4 g/L. C-reactive protein and all other routine laboratory parameters were normal.

Anti-tickborne encephalitis virus IgG and IgM antibodies were detectable in the serum by enzyme-linked immunosorbent assay 29 days after the tick bite; corresponding CSF titers were borderline. One week later, IgG and IgM antibodies were positive in serum and CSF, while CSF leukocyte count and protein concentration were normal. The anti-tickborne encephalitis serum immunofluorescence titer rose from 1:80 (June 29) to 1:640 (July 14); titers against dengue, West Nile, yellow fever, and Japan B encephalitis were not elevated. Even though CSF specimens were negative for TBEV genome on 2 occasions, a confirmed tickborne encephalitis case had to be reported to the health authorities.

With symptomatic therapy, the patient’s condition improved, and he was discharged on July 7 with slight mental slowing. By July 14, he had recovered completely. 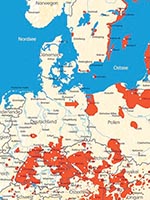 Our patient had acquired tickborne encephalitis at a popular tourist site (Figure), where no human cases had occurred for 19 years. From 1959 to 1983, numerous TBEV foci existed in northeastern Germany (3). From 1960 to 1985, a total of 4 human cases were seen 10 km east of Neustrelitz. From 1983 to 1989, numerous attempts to cultivate TBEV from ticks or small mammals failed (3). In 1992, TBEV genome was detected by PCR in 3 tick pools from the island of Usedom, and in 2 pools from the Darss peninsula, 100 km northeast of Neustrelitz. From 1993 to July 2004, TBEV genome was not detected in 16,098 ticks collected from 275 regions of northeastern Germany, including the county where Lake Woblitz is situated, as part of a statewide surveillance program (State Health Services, unpub. data). However, during 2004, this county reported 24 cases of Lyme disease (2003: 10 cases; 2002: 8 cases; 2001: 1 case). Therefore, our tickborne encephalitis case might represent intensified amplification cycles of tickborne infectious agents in 2004.

Eight weeks after our patient’s tick bite, 160 Ixodes ricinus ticks were collected from 10 pools near Lake Woblitz. RNA was isolated in 5 mol/L guanidium isothiocyanate solution, extracted by phenolchloroform, and precipitated with ethanol. cDNA was amplified by nested reverse transcription–PCR and detected by electrophoresis (6). In 2 of these pools, PCR directed towards the 5′ terminal noncoding region of the TBEV genome yielded a 104-bp fragment, but the sequence was not specific for flaviviruses.

We thank G. Dobler for performing immunofluorescence tests for antibodies against TBEV and other flaviviruses, J. Suess for sequencing tick-derived PCR amplificates, and F. Ruhnau and J. Reimann for their cooperation in patient care.

Page created: May 23, 2011
Page updated: May 23, 2011
Page reviewed: May 23, 2011
The conclusions, findings, and opinions expressed by authors contributing to this journal do not necessarily reflect the official position of the U.S. Department of Health and Human Services, the Public Health Service, the Centers for Disease Control and Prevention, or the authors' affiliated institutions. Use of trade names is for identification only and does not imply endorsement by any of the groups named above.