Chlamydiae are implicated in a wide variety of clinically and economically important diseases in livestock and companion animals. Chlamydophila pecorum has been associated with abortion, conjunctivitis, encephalomyelitis, enteritis, pneumonia, and polyarthritis in ruminants, and Cp. abortus infection is the most common cause of abortion in sheep and goats (1). Cp. abortus also causes zoonotic infection in humans, which in pregnant women, can result in spontaneous abortion (2,3).

During the past decade, new Chlamydia-like organisms have been discovered and now emerge as possible public health threats. Simkania negevensis is considered a possible emerging agent of pneumonia (4), and evidence supports the role of Parachlamydia acanthamoebae as an agent of pneumonia (5,6). Waddlia chondrophila is another Chlamydia-like organism initially isolated from lung, liver, and other tissues of an aborted bovine fetus in the United States (7). This organism is now considered an abortigenic agent with a worldwide distribution in cattle, as shown by a recent report of Waddlia-related abortion in Germany (8).

The role of Chlamydia-like organisms in bovine abortion is further supported by results of a study of abortion in cattle in Graubünden, Switzerland (9). Analysis of placental specimens by PCR showed that 43 (18.3%) of 235 placentas contained DNA from Chlamydia-like organisms (9). Of these 43 specimens, 8 showed sequence similarity to P. acanthamoebae (95%–99%). Identification was not possible in the remaining 35 specimens because of their strong sequence similarity with uncultured chlamydial DNA sequences (Table). These 35 specimens were referred to as Chlamydia-like organisms. None of these 35 specimens was positive by immunohistochemical analysis with antibodies against Chlamydiaceae. This finding indicates that routine diagnostic approaches based on chlamydial lipopolysaccharide would not detect most Chlamydia-like infections (9). To confirm the role of these novel chlamydiae in bovine abortion, we analyzed these placental samples from cattle in Switzerland by using a new specific immunohistochemical protocol and transmission electron microscopy.

Formalin-fixed and paraffin-embedded placenta specimens were analyzed by using histopathologic and immunohistochemical techniques. Hematoxylin and eosin–stained histologic sections of all placenta specimens (n = 235) were examined for the type and degree of placentitis or vasculitis. Paraffin-embedded sections of specimens positive for Chlamydia-like organisms by 16S rRNA PCR (n = 43) were analyzed for Parachlamydia spp. and Waddlia by using specific mouse polyclonal antibodies as described (10). Optimization experiments for immunohistochemical analysis were performed by using infected amebal and infected HEp-2 cell pellets. Briefly, Acanthamoeba castellanii cultures were infected with P. acanthamoebae strain Hall coccus and W. chondrophila strain ATCC 1470. HEp-2 cell monolayers were infected with Cp. abortus strain S26/3. Uninfected cells were used as negative controls. Amebal and cell pellets were prepared as described (11). Optimization of the immunohistochemical protocol for experimentally infected amebal pellets showed the species specificity of mouse antibodies to P. acanthamoebae and W. chondrophila. We did not observe cross-reactivity of both antibodies with Cp. abortus–infected HEp-2 cell pellet (data not shown).

To test placental specimens, we used mouse polyclonal antibody against P. acanthamoebae and W. chondrophila at dilutions of 1:1,000 and 1:2,000, respectively. Antigen detection was performed with the ChemMate Detection Kit (Dako, Glostrup, Denmark) according to the manufacturer’s instructions. Briefly, paraffin-embedded sections were deparaffinated in xylene and rehydrated through graded ethanol to water. Antigen was detected by using repeated microwave heating (750 W for 10 min) in citrate buffer, pH 6.0 (Target Retrieval Solution, Dako). Specimens (slides) and primary antibodies were incubated for 1 hour. Negative and positive controls of each section were included as described (9). 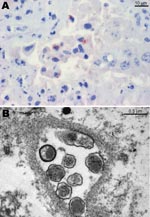 Figure. A) Immunohistochemical analysis of a bovine placenta positive by PCR for Parachlamydia acanthamoebae, showing a positive brown-red granular reaction within trophoblastic epithelium. Antigen detection was conducted with a polyclonal antibody against...

Dr Borel is a researcher and pathologist at the Institute of Veterinary Pathology of the University of Zurich. Her research interests include the epidemiology and pathology of animal chlamydiosis and the role of obligate intracellular chlamydiae in ruminant abortions and their zoonotic potential to humans.

We thank Adam Polkinghorne for reviewing the manuscript; Ruedi Thoma for providing sample material; and the laboratory technical staff of the Institute of Veterinary Pathology, University of Zurich, and the Cantonal Laboratory of Veterinary Bacteriology, Chur, Switzerland, for assistance.

This study was supported by the State Secretary for Education and Research, Berne, Switzerland (project no. C05.0141) as part of the European Cooperation in the Field of Scientific and Technical Research Action 855. G.G. is supported by the Leenards Foundation through a career award, “Bourse leenards pour la relève académique en médecine clinique à Lausanne.”