Trends for Influenza-related Deaths during Pandemic and Epidemic Seasons, Italy, 1969–2001

Age-specific patterns of death from influenza vary, depending on whether the influenza season is epidemic or pandemic. We assessed age patterns and geographic trends in monthly influenza-related deaths in Italy from 1969 through 2001, focusing on differences between epidemic and pandemic seasons. We evaluated age-standardized excess deaths from pneumonia and influenza and from all causes, using a modified version of a cyclical Serfling model. Excess deaths were highest for elderly persons in all seasons except the influenza A (H3N2) pandemic season (1969–70), when rates were greater for younger persons, confirming a shift toward death of younger persons during pandemic seasons. When comparing northern, central, and southern Italy, we found a high level of synchrony in the amplitude of peaks of influenza-related deaths.

In Europe and the United States, the geographic pattern of influenza epidemics has been studied extensively, yet mostly at the national level with few local studies (1–6). Description of local influenza patterns can contribute to understanding of transmission and seasonality, which are influenced by factors such as demographic differences, climatic variability, and virus virulence.

Although patterns of influenza-related deaths have been investigated in many countries (14–18), few studies have focused on southern Europe. With regard to Italy, these methods have been applied only to death data for elderly persons during 1970–2001 and only at the national level (19). Our objective was to use the above-described approach to assess age patterns and geographic trends for influenza-related deaths in Italy; our focus was on differences between epidemic and pandemic seasons.

We obtained the monthly number of deaths caused by P&I and AC in Italy from 1969 (first available data year) through 2001 (most recent data year) from the Italian National Census Bureau, which records all causes of death reported on death certificates and classifies them according to the International Classification of Diseases (ICD). For our analysis, we considered only the underlying cause of death. To select P&I deaths, we used ICD-8 codes 480–486 and 470–474 for the years 1969–1979 and ICD-9 codes 480–486 and 487 for the years 1980–2001.

The geographic areas considered were the 3 administrative regions of Italy: northern Italy, central Italy, and southern Italy, as defined by the Italian National Census Bureau (20). Northern Italy comprises Piedmont, Lombardy, Autonomous Province of Trento, Autonomous Province of Bolzano, Val d’Aosta, Veneto, Friuli Venezia Giulia, Liguria, and Emilia Romagna. Central Italy comprises Tuscany, Umbria, Marche, and Lazio. Southern Italy comprises Abruzzo, Molise, Campania, Puglia, Basilicata, Calabria, Sicily, and Sardinia. For each year, we generated summary datasets of the monthly number of deaths from P&I and AC, stratified by age group (0–14, 15–44, 45–64, and >65 years) (9). We calculated the annual number of persons in each age group and the monthly number of deaths per 100,000 population for each age group and standardized these to 30.4-day months.

To determine which influenza viruses were circulating each season, we reviewed publications listing viral subtypes identified in Italian laboratories (21–23). For the most recent years (1999–2001), we obtained these data from the Italian National Influenza Center, which has performed virologic surveillance since 1999.

To estimate age-specific excess deaths an indirect measure of death attributable to influenza from P&I and AC for the 32 influenza seasons, we applied a Serfling-type regression model to monthly time series of deaths (7,9). As described in previous studies (9,19), we removed the seasonal trend from the time-series data (de-trended) by fitting a smooth spline function to the average death rates in summer (June–August). Then, we applied a seasonal regression model to the de-trended series, excluding values for December–April, to model the expected mortality rates in the absence of influenza activity. Monthly mortality rates were calculated as the observed minus the predicted mortality rates for all epidemic months. We identified epidemic months by applying the above-mentioned procedure to deaths coded specifically as influenza (ICD-8 code 470–474 and ICD-9 code 487). We defined epidemic months as those winter months for which influenza-specific mortality rates exceeded the upper 95% confidence limit of the seasonal model.

Seasonal excess deaths were estimated as the sum of monthly excess deaths, after back-adjusting for the true month length and removing the spline transformation. The model was applied to P&I and AC mortality rates separately for each age group. We achieved an excellent fit for all age groups. All model terms included were statistically significant (p<0.0001), but additional terms were not (p>0.05).

To determine whether variations in age structure biased the geographic comparisons, we generated excess mortality rates for each area and age group and standardized them on the basis of the age distribution of the Italian population in 2001 (the year of the most recent Italian census). This permitted a comparison of age-adjusted P&I and AC excess mortality rate estimates across areas.

To compensate for nondemographic differences among areas (e.g., differences in access to healthcare and in coding for cause-specific deaths) (24), we also calculated the percentage increase in mortality rates as the excess deaths divided by the baseline deaths in winter (expected deaths), for P&I and AC, separately. This measure has been used successfully in past research (7,8). To estimate correlations of influenza-related death across the 3 geographic regions, we calculated the pairwise Spearman correlation coefficients of seasonal estimates for the 32 years considered.

Geographic Trends, Synchrony, and Effect of Epidemic Seasons (All Ages) 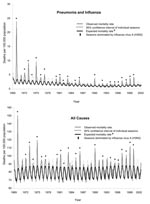 Figure 2. Correlation in the influenza epidemics for 31 influenza seasons (1970–2001), measured by excess deaths from pneumonia and influenza (A) and all causes (B). Excess mortality rates per 100,000 in southern and...

For the overall study period, the excess deaths per 100,000 population from AC was 15 for northern Italy, 14 for central Italy, and 22 for southern Italy; from P&I they were 4, 3, and 3, respectively (Appendix Figure 1). Also for these 32 years, no statistical differences among the 3 geographic areas were noted for excess deaths from P&I or AC (Kolmogorov-Smirnov test, p = 0.8 and p = 0.9, respectively). Patterns were similar with the percent increase in excess deaths from P&I and AC. The 95% confidence intervals for estimates for individual seasons were within 6% of given values (Table 1). When conducting this analysis for seasons in which influenza A (H3N2), A (H1N1), and B predominated, area-level differences were again not significant. The strong correlation of excess-death estimates in the 3 regions suggests a high level of synchrony in the amplitude of local influenza epidemics (number of excess deaths peaked in the same month in each region) across Italy (P&I, Spearman ρ = 0.88–0.93, p<0.0001; AC, Spearman ρ = 0.80–0.93, p<0.0001) (Figure 2; Appendix Figure 2).

Magnitude and Trends of Influenza-related Deaths during Pandemic and Epidemic Seasons, by Age

During epidemic seasons, most influenza-related deaths at the national level (84%) occurred in persons ≥65 years of age, for P&I and AC; by contrast, during the 1969–70 influenza A (H3N2) pandemic season, deaths markedly affected all age groups, especially the 45–64 group.

This study showed a high level of correlation in the amplitude of influenza epidemics (i.e., peaks in rates were similar) in the 3 Italian regions during a 32-year period spanning epidemic and pandemic seasons. The analysis of local influenza-related death patterns did not show differences in mean mortality rates among geographic areas These findings are consistent with the high level of synchrony found in other area-level studies in Europe and in the United States (1,2,5,6).

The first season analyzed was the 1969–70 pandemic season. In Italy, as in other European countries (8), the pandemic season was more destructive in the second season of circulation of influenza A (H3N2) virus (i.e., in 1969–70), 1 year after the pandemic strain was first introduced to Italy (25–27). The pandemic season seems to have had a greater effect in Italy; excess mortality rates were estimated to be 38 (20,000 deaths) for P&I and 107 (57,000 deaths) for AC. These unexpectedly large excess mortality rates were 3-fold higher than that in the United States and 1-fold higher than those in other European countries. The increase in percentage of deaths reduced but did not eliminate these differences. However, the percentage of deaths in persons <65 in Italy (29%) was lower than the percentage in that age group in the United States (34%) but similar to the percentages in other European countries, especially France (27%) (Table 3). Future studies could address these differences in numbers of deaths that may stem from underlying differences in baseline mortality rates or perhaps in influenza transmission.

During the pandemic seasons, compared with epidemic seasons, the relative increase in mortality rates was lower for elderly than for younger persons in Italy, confirming that during pandemics, children and young adults have a greater relative risk for death than the elderly (12). A possible explanation is the partial immune protection of elderly persons who may have been exposed before 1891 to H3 antigens (28), whereas persons born after 1891 would not have been exposed to these antigens.

Several limitations should be mentioned. First, deaths from P&I were not always confirmed by laboratory methods, which could have resulted in misclassification of deaths. However, patterns of death from P&I were very similar to those from AC, which are not subject to this bias. A second limitation was that demographic and nondemographic differences could have biased the geographic comparison. However, we performed age standardization and calculated the percentage increase in deaths over the winter baseline, which reduces baseline differences in deaths, unrelated to influenza.

A third, more critical, caveat stems from the surveillance of viral subtypes. The proportion of laboratory-confirmed cases has only been available since 1999 (i.e., for only 2 years of the study period). However, in the latest years the proportion of laboratory-confirmed cases was ≈15% (range 11%–28%), with >3,000 samples tested (29), which could have affected the accuracy of influenza diagnoses over time and perhaps across regions. For example, during the 1998–99 season, when influenza B viruses were predominant, the death rate was high compared with that found for the other influenza B seasons, which indicates that the characterization of viral subtypes is limited by the geographic distribution of the sites participating in virologic surveillance.

Our findings suggest that influenza epidemics are strongly correlated in amplitude across the 3 regions of Italy. Different factors have been reported to drive the spatial and temporal correlations of epidemics: population movements and environmental factors such as climate or weather conditions (5,30,31). Although population movements are assumed to play a key role in the global spread of influenza epidemics, they have been quantified only in the United States (5,32,33). The role of environmental factors and differences in circulating viruses among the geographic areas in Italy also remains to be clarified.

In conclusion, our results suggest that geographic synchrony of influenza in Italy is high and that for persons <65 years of age, death rates are likely to be substantially elevated in a future pandemic as compared with other epidemic seasons. Our study adds to others that have found strong spatiotemporal patterns in illness and death from influenza in the United States, France, Australia, and across Europe (1,3,5,34). Such results provide insight for the Italian pandemic preparedness and response efforts (35,36) and could be used in mathematical models for influenza spread at the national level.

Dr Rizzo is a physician with the National Centre of Epidemiology and Health Promotion, Istituto Superiore di Sanità, Rome, Italy. Her research interests focus on epidemiology and surveillance of infectious diseases, especially modeling of influenza epidemics and pandemics over time.

We thank Fabrizio Rossi for managing the dataset.

Page created: June 24, 2010
Page updated: June 24, 2010
Page reviewed: June 24, 2010
The conclusions, findings, and opinions expressed by authors contributing to this journal do not necessarily reflect the official position of the U.S. Department of Health and Human Services, the Public Health Service, the Centers for Disease Control and Prevention, or the authors' affiliated institutions. Use of trade names is for identification only and does not imply endorsement by any of the groups named above.

Trends for Influenza-related Deaths during Pandemic and Epidemic Seasons, Italy, 1969–2001