Echinococcus multilocularis, the causative agent of zoonotic alveolar echinococcosis, can be controlled effectively by the experimental delivery of anthelminthic baits for urban foxes. Monthly baiting over a 45-month period was effective for long-lasting control. Trimonthly baiting intervals were far less effective and did not prevent parasite recovery.

Human alveolar echinococcosis (AE) is a potentially fatal zoonosis (1) caused by Echinococcus multilocularis, a helminth that is widespread in red foxes (Vulpes vulpes). In recent years, fox populations in central Europe have increased and extended their habitats into urban areas (2). Consequently, AE rates have increased (1). Epidemiologic and ecologic studies have demonstrated that urban peripheries provide suitable conditions for high densities of susceptible final hosts (red foxes) and intermediate hosts (voles) (3). Consequently, these densely populated areas can be highly contaminated with E. multilocularis eggs and are of special interest for the development of cost-effective control strategies (2).

Parasite control by substantially reducing intermediate host density (rodents) or by large-scale fox culling are far less promising strategies than delivering anthelminthic baits for foxes (4). In 3 studies from southern Germany, the regular distribution of 15 to 50 praziquantel baits per km2 resulted in a significant decrease in the prevalence of foxes from 35%, 64%, and 14–37% to 1%, <20%, and 2%–12%, respectively (5–7). Different baiting studies in Japan have demonstrated lower environmental contamination with E. multilocularis eggs when praziquantel baits are placed around fox dens (8), along roads, and in forests that provide protection from the wind (9). Even in small-scaled areas of <6 km2, anthelmintic baiting has been effective (10,11), resulting in a lower reinfection rate in foxes because of a lower prevalence of the parasite in intermediate hosts (11). However, local eradication of the parasite is difficult to achieve. Long-lasting interventions seem to be necessary for effective control of E. multilocularis (12). Therefore, cost-effective baiting strategies must be designed.

Our aim was to provide data so that optimal and cost-effective baiting strategies could be designed. To obtain these data, we investigated the effect of different baiting intervals and the postcontrol recovery of the parasite population. 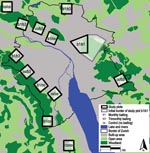 Figure 1. Study area of the anthelminthic baiting experiments in the conurbation of Zurich, Switzerland. Thirteen study plots were defined along the urban periphery during the 2-phased baiting period (phase 1, April 2000–October...

We used commercial fox baits (Impfstoffwerk Dessau Tornau GmbH, Rosslau, Germany) that contained 50 mg of the anthelminthic praziquantel (Droncit Bayer AG, Leverkusen, Germany). At each baiting interval, 50 baits per km2 were distributed manually at places that were most likely to be frequented by foxes (11).

Using a sandwich ELISA, we determined the effect of baiting by detecting E. multilocularis coproantigens in fox feces (13). Feces samples were collected at least once per month in all study plots during sampling period 1 before and during the initial phase of bait delivery (November 1999–June 2000), sampling period 2 (July–October 2001), and sampling period 3 (September–December 2003). Additionally, during November 2006–January 2007 (sampling period 4), feces samples were collected in the three 1-km2 plots that had never been baited and in the treated section of the 6-km2 plot that had been baited monthly throughout the entire baiting period (Figure 1).

Our finding contrasts with the results of 2 German studies: in rural, large-scale study areas where baits were distributed once every 3 months during 9 and 18 months, respectively, baits were effective in maintaining the prevalence of E. multilocularis in foxes at the same level as that in previous baiting campaigns conducted at intervals of 6 weeks (6,7). It is possible that lower fox densities in rural areas compared with urban areas or the shorter periods during which trimonthly baiting intervals were applied are responsible for this difference. More likely, the difference can be explained by border effects. Foxes with home ranges near the border of a baited area have less access to the anthelminthic baits. Furthermore, immigrating foxes can contribute to E. multilocularis contamination. In large baiting areas a smaller proportion of treated foxes live near the border of the treated area and a smaller proportion of foxes are immigrated foxes. Therefore, small baiting areas are more affected by border effects. Further decreasing the baiting frequency to 6-month intervals and discontinuing bait distribution caused a surge of E. multilocularis prevalence in foxes to the precontrol level within 36 months (6).

E. multilocularis contamination in nonbaited areas (co/co plots) was higher during period 3 than during period 4 (Figure 2). Natural fluctuations possibly contributed to generally low E. multilocularis prevalences during the latter period. However, it was surprising that contamination was still very low 3 years after all bait delivery was ended in an area that was baited monthly during a 3.5-year period. Before baiting started, E. multilocularis was highly prevalent in this plot, and prevalences in European water voles (Arvicola terrestris) ranged from 9% to 21% during several years (1997–2000) (11,13). We therefore assume that a long-lasting control effect was achieved by local removal of the parasite by monthly anthelmintic bait delivery over several years.

Our results confirm the high potential of E. multilocularis to recover to a precontrol level within a short period if the parasite was not completely removed, as has been predicted by modeling studies (14,15) and shown in a single, but large, baiting area in Germany (6). On the basis of a spatially explicit model, Hansen et al. recommend continued bait delivery with intervals from 4 to 6 weeks (15). Our results support these findings. We therefore suggest continued intense baiting even if parasite contamination has been substantially reduced. Furthermore, our results provide evidence that, once the parasite has disappeared locally, recolonization can take several years, even in a small-scale baiting area.

Dr Hegglin is a research associate at the Institute of Parasitology of the University of Zürich. His areas of interests include urban ecology, wildlife management, and parasitology.

Dr Deplazes is director of the Institute of Parasitology of the University of Zurich. His primary interests include parasitic zoonoses.

We thank Lucia Kohler, Isabelle Tanner, and all other collaborators for help with the extensive field and laboratory work; Christian Stauffer and the game wardens of the city of Zürich for their generous collaboration; and Fabio Bontadina and Paul Torgerson for valuable comments on an earlier draft of the manuscript.

Daniel Hegglin, University of Zurich–Institute of Parasitology, Winterthurerstrasse 266a, Zurich 8057, Switzerland;