Enzyme-linked immunosorbent assay, Western blot, and virus neutralization assays indicated that red colobus monkeys in Kibale National Park, western Uganda, had antibodies to a virus that was similar, but not identical, to known orthopoxviruses. The presence of a novel poxvirus in this endangered primate raises public health and conservation concerns.

The virus subfamily Chordopoxviridae contains emerging pathogens of considerable concern, both because of their historic impact on global human health and because of their zoonotic potential (1). Although certain poxviruses in this subfamily are among the most extensively studied viral pathogens (e.g., smallpox, vaccinia), the natural diversity of mammalian poxviruses remains poorly characterized. This fact is especially true in sub-Saharan Africa, where at least 1 zoonotic orthopoxvirus (monkeypox) has caused sporadic human outbreaks since 1970 (2), and infected rodents exported to the United States caused a highly publicized human outbreak in 2003 (3,4). In this study, we describe serologic evidence for a previously uncharacterized poxvirus in endangered red colobus monkeys (Procolobus rufomitratus tephrosceles) from Kibale National Park, western Uganda (5,6). Our results, based on postadsorption ELISA, Western blot, and virus neutralization assays, extend our understanding of the host range and diversity of poxviruses and raise public health and conservation concerns.

From June 12 to June 24, 2006, 31 red colobus (13 males, 18 females, all adult or subadult) were sampled from Kibale National Park, western Uganda (5,6). Animals were chemically immobilized in the field by intramuscular injection of tiletamine/zolezepam (4.6–9.6 mg/kg body weight) with 1.0- or 1.5-mL plastic darts with 5/8-inch needles shot from a variable-pressure compressed air rifle. After initial darting, animals were given tiletamine/zolezepam or ketamine HCl intravenously as needed. Blood samples were collected into vacutainers containing sodium-EDTA, plasma was separated in the field by centrifugation, and samples were stored in liquid nitrogen for transport to North America. Animals were placed in cloth bags to recover from anesthesia and were released near trees and vines that were easy to climb and within visual range of their social groups. All animals appeared healthy at the time of capture. Animal protocols were approved by the McGill University Animal Care Committee before data collection. 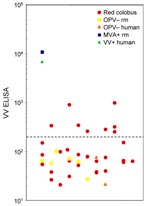 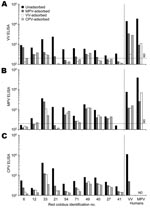 Postadsorption ELISA tests (7) were used next to determine the specificity of the response to 1 of 3 orthopoxviruses: VV, monkeypox virus (MPV), or cowpox virus (CPV). Plasma samples were tested directly by ELISA or preadsorbed (1:30) for 30 minutes at 37°C with VV, MPV, or CPV lysate normalized to contain 6 × 108 PFU/mL before addition to virus-coated ELISA plates (Figure 1). The postadsorption ELISA test allows one to differentiate among closely related orthopoxviruses. For instance, VV-specific antibodies are best depleted by VV lysate assayed on a VV-coated ELISA plate (Figure 1, panel A). However, analysis of samples from 10 red colobus with detectable anti-VV antibody responses (Appendix Figure) did not show a clear pattern following preadsorption with VV, MPV, or CPV antigens, which suggests a similar cross-reactivity to each of these 3 orthopoxviruses.

Members of the Orthopoxvirus genus elicit cross-neutralizing antibodies against other members of the same genus. To determine if the red colobus were infected with an orthopoxvirus or a more distantly related poxvirus, plaque reduction neutralization assays were performed using 100 PFU of MPV, VV, or CPV. Plasma samples from all 31 red colobus were tested, and all exhibited a neutralizing titer 50 of <20 against MPV, VV, or CPV (data not shown). These findings suggest that although the monkeys were infected with a poxvirus with serologic cross-reactivity to VV (Appendix Figure), lack of a detectable neutralizing antibody response (<20) indicates that the animals may have been infected with a poxvirus that is not a member of the Orthopoxvirus genus.

Our results provide evidence that red colobus in Kibale National Park have been exposed to a previously uncharacterized poxvirus. Kibale red colobus may have been exposed to monkeypox or to a “monkeypox-like” virus, but we could not confirm this with our current serologic tools. On the other hand, other poxviruses, such as Tanapox virus and Yaba monkey tumor virus, have been identified in Africa, and infection by 1 of these poxviruses or a related virus cannot be ruled out. Future studies will require optimizing serologic diagnostics against these divergent poxviruses (with appropriate positive and negative controls) to determine the identity of the poxvirus/poxviruses that have infected the red colobus described here. In this light, we note that tanapox, a zoonosis of suspected primate origin (8,9), derives its name from the Tana River, eastern Kenya, which supports an isolated population of red colobus closely related to those in Kibale (P. r. rufomitratus) (10,11).

A protracted outbreak of infectious disease occurred in Kibale red colobus from 1971 to 1981, where it caused a death rate up to nearly 10% in some social groups, apparently killing only adult male monkeys (12). Although neither formal clinical data nor biologic samples were collected, descriptions of lesions of affected monkeys suggested diffuse to multifocal areas of inflammation with gray mottling and epidermal crusts on the face (most commonly the lips), perineum, and inguinum, followed by alopecia and impaired locomotion. Monkeys sampled for the present study would almost certainly not yet have been born during this period, but these observations raise the possibility that outbreaks of disease at least outwardly consistent with poxvirus infection have occurred previously in Kibale red colobus.

Poxviruses are known for their potential to cross species barriers (1), and red colobus living in small, unprotected forest fragments outside of Kibale National Park interact aggressively and at high rates with local persons and their domestic animals (13). At the same time, persons in rural western Uganda already bear a high incidence of pathogens, including HIV (14), which renders a substantial proportion of the population immunocompromised and susceptible to opportunistic infections. Recent outbreaks of zoonotic poxviruses have not been documented in our study area, despite a local and regional healthcare system that would most likely have detected such events. However, the presence of a novel and potentially zoonotic poxvirus in red colobus should be viewed as a point of concern for the future of public health in this region and elsewhere.

Dr Goldberg is associate professor of epidemiology and preventive medicine in the Department of Pathobiology at the University of Illinois, Urbana-Champaign, and director of the Kibale EcoHealth Project, Uganda. His research focuses on the ecology and epidemiology of infectious diseases, with an emphasis on molecular epidemiology and zoonoses.

We gratefully acknowledge the Uganda Wildlife Authority and the Uganda National Council for Science and Technology for granting us permission to conduct this research and Makerere University Biological Field Station and the Kibale EcoHealth Project and the Kibale Fish and Monkey Project for providing logistic support. We further thank I. Messaoudi for help with sample acquisition at Oregon Health and Science University, and T. Struhsaker and D. Coleman for invaluable comments and discussion.

Oregon Health and Science University and Dr. Slifka have a financial interest in Najit Technologies, Inc., a company that may have a financial interest in the results of this research and technology. This potential conflict of interest has been reviewed and managed by Oregon Health and Science University and the Integrity Oversight Council. Support for this work was provided in part by Public Health Service grant R41 AI063675, PO1 AG023664, and Oregon National Primate Research Center grant RR000163 (to M.K.S.), Department of Defense contract W81XWH-05-1-0046 (to S.W.W.), NSERC, CFI, and CRC funding (to C.C.), and a Richard H. Tomlinson Post-Doctoral Fellowship and Wenner-Gren Foundation grant (to T.S.).