A novel rickettsia was detected in Ixodes tasmani ticks collected from Tasmanian devils. A total of 55% were positive for the citrate synthase gene by quantitative PCR. According to current criteria for rickettsia speciation, this new rickettsia qualifies as Candidatus Rickettsia tasmanensis, named after the location of its detection.

Although Candidatus Rickettsia tasmanensis, a proposed new species of rickettsiae, has not been associated with human disease, the possible virulence of this rickettsia cannot be disregarded. Some initially identified rickettsiae were later found to cause disease in humans. For example, R. parkeri was discovered in 1939 (6) but was only confirmed as a human pathogen in 2004 (7). To investigate infections in Tasmania, we collected ticks from Tasmanian devils (Sacrophilus harrissi) and analyzed them for rickettsial species.

Forty-four I. tasmani ticks were collected from Tasmanian devils from various sites in Tasmania during 2005–2006; 36 were engorged females, 5 were nymphs, and 3 were males. Each tick was washed in 70% ethanol, rinsed in sterile phosphate-buffered saline, and homogenized. Homogenates were then subjected to DNA extraction by using a QIAmp DNA Blood Mini Kit (QIAGEN, Hilden, Germany). The presence of a rickettsial agent was detected by real-time PCR (8). Characterization of novel rickettsial species was achieved by comparing sequences of genes as described (9).

Amplification and sequencing of 1,096-, 3,005-, 588-, and 4,918-bp products for the citrate synthase (gltA), surface cell antigen (sca4), outer membrane protein A (ompA), and ompB genes, respectively, were conducted by using primers previously described (9). The 16S rRNA (rrs) gene was not amplified because cell culture isolation was not performed. Amplicons were cloned by using the TA Cloning Kit (Invitrogen, Carlsbad, CA, USA) and extracted by using a QuickLyse Mini Prep Kit (QIAGEN).

Sequences were assembled and edited by using the SeqMan Pro program (DNASTAR, Inc., Madison, WI, USA) and evaluated by using neighbor-joining and maximum-parsimony methods in MEGA 4 (10) and the maximum-likelihood method in PHYLIP (11). Results were confirmed by using BLAST analysis software (http://blast.ncbi.nlm.nih.gov/Blast.cgi). All sequences have been deposited in GenBank (Table). 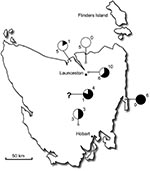 Figure 1. Map of Tasmania, Australia, showing number of positive (black) and negative (white) ticks and their locations. The question mark indicates unknown locations. A total of 55% of the ticks were positive...

Rickettsial DNA was detected in 24 (55%) of 44 I. tasmani ticks by using a gltA-specific quantitative PCR (qPCR) assay. Because most ticks were engorged females, no statistical correlation was found between the sex of ticks and presence of rickettsiae. Distribution of the ticks collected and degree of positivity are shown in Figure 1.

Comparison of our sequences with that of a partially sequenced rickettsia (R. tasmanensis strain T120) previously detected in an I. tasmani tick removed from a child near Underwood, Tasmania (N. Unsworth, unpub. data) found homology levels to be within the species threshold. No data on the clinical state of the child were obtained.

Sequences closely matched genes of a second partially sequenced rickettsia (Rickettsia sp. 518) from an I. tasmani tick removed from a Tasmanian devil in Tasmania by researchers at Macquarie University (Sydney, New South Wales, Australia) (13). Of the 3 partial gene sequences reported, ompB and gltA gene sequences matched to the species level with Candidatus R. tasmanensis; however, ompA gene sequences did not. Their isolate could be another new species, although it is difficult to draw conclusions with sequences of small fragments.

Figure 2. Phylogenetic tree showing the relationship of a 4,834-bp fragment of the outer membrane protein B gene of Candidatus Rickettsia tasmanensis (in boldface) among all validated rickettsia species. The tree was prepared...

Results of sequence analysis of the ompB gene by using the neighbor-joining algorithm are shown in Figure 2. Although all selected genes were analyzed, the ompB gene tree had the strongest bootstrap values and the largest compared fragment size.

All 44 ticks were collected from northeastern and eastern Tasmania. The number of positive samples (55%) contrasts with the small number of reported SFG rickettsial human infections in Tasmania because I. tasmani, which is known to opportunistically bite humans (5), has a high density in Tasmania. Clinical cases of infection may be missed because physicians are not aware of human rickettsial disease in Tasmania.

A recent study showed a high level of exposure to SFG rickettsia in cats and dogs near the city of Launceston, Tasmania (L. Izzard, unpub. data); in the Ravenswood area 10 of 16 tick samples were positive for SFG rickettsia by qPCR. However, the species of SFG rickettsiae could not be determined in this study because only serologic analysis was conducted. Because I. tasmani ticks are common in Tasmania and parasitize cats and dogs, Candidatus R. tasmanensis is likely to be the causative agent in some of the cases.

Mr Izzard is a doctoral candidate at Murdoch University in Perth and works at the Australian Rickettsial Reference Laboratory in Geelong. His research interests are detection and isolation of novel rickettsial species and molecular diagnostics of rickettsial pathogens in Australia.

We thank Ian Norton, his colleagues, and Dydee Mann for collecting ticks from sites in Tasmania; and Ian Beveridge for assistance with tick speciation.