Infectious bronchitis virus (IBV) causes a costly respiratory viral disease of chickens. The role of wild birds in the epidemiology of IBV is poorly understood. We detected diverse coronaviruses by PCR in wildfowl and wading birds in England. Sequence analysis showed some viruses to be related to IBV.

Infectious bronchitis virus (IBV), a group 3 coronavirus, causes a costly viral disease of chickens that is found worldwide (1). It can cause respiratory disease in chickens of all ages and a loss of production and egg quality in mature hens (2). Some strains are nephropathogenic, resulting in renal-induced mortality rates of up to 25% for susceptible flocks (1). Currently, the poultry industry controls disease through the use of vaccines. However, IBV continuously generates antigenic variants; current vaccines offer no protection against some of them (3). Wild birds may play a role as both reservoirs and long-distance vectors of IBV.

Serial cross-sectional surveys of wild bird populations throughout northern England were undertaken from July 2004 through January 2007. Samples were collected from 441 individual wild birds of 42 species, including both migratory and resident species (Table 1). Fecal samples and oropharyngeal swabs were collected from live birds that had been caught primarily for ringing purposes (8) and from dead wildfowl and corvids provided by licensed shooters. Biometric data and information concerning the location where birds had been trapped or shot were recorded (8). Samples were placed in virus transport media (Eagle minimum essential medium supplemented with 10% fetal calf serum, penicillin, and streptomycin [10,000 units penicillin, 10 µg streptomycin/mL] and amphotericin B [250 µg/mL]); samples collected from the same wild bird species or genus were pooled in groups of 5 and frozen at –80°C until required.

Viral RNA was extracted from pooled fecal samples and pooled oropharyngeal swabs by using a QIAamp Viral RNA Mini Kit (QIAGEN, Crawley, UK) following the manufacturer’s instructions. Reverse transcription–PCR was used to detect avian coronaviruses as previously described (9). The primers UTR41+ (5′-ATGTCTATCGCCAGGGAAATGTC-3′) and UTR11- (5′-GCTCTAACTCTATACTAGCCTA-3′) targeted the 3′ untranslated region (UTR) of the coronavirus genome, which is highly conserved among all known types of IBV (9). This procedure was followed by use of a heminested PCR with the same forward primer but the reverse primer UTR hemi- (5′-CTTAAACTAAAATTTAGCTCTTCC-3′) under the same reaction conditions as the initial PCR, which had an expected product size of 214 bp. PCR products were purified by using a commercial purification kit (QIAquick PCR Purification Kit; QIAGEN) according to the manufacturer’s instructions and were sequenced commercially (Cogenics, Essex, UK) as recommended by the manufacturer (ABI 3730xl DNA Analyser; Applied Biosystems, Warrington, UK). Nucleotide sequences derived from this study have been deposited in the GenBank sequence database under accession nos. FJ490193–FJ490199. 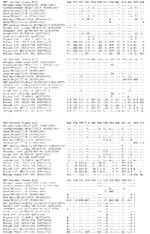 Appendix Figure. Multiple-sequence alignment of a fragment of the 3? untranslated region of coronaviruses detected in wild birds in this study and other previously published group 3 coronavirus sequences from wild birds and...

Sequences were aligned with previously published coronavirus sequences obtained from GenBank by using the Clustal program within the MEGA 4.0 package (10) (Appendix Figure). Phylogenetic analyses were conducted in MEGA 4.0. Phylogenies were estimated by using a minimum-evolution method (11), and evolutionary distances were computed by using the Tamura-Nei method (12). Phylogenetic trees were drawn to scale; branch lengths in the same units as those of the evolutionary distances were used to infer the phylogenetic tree. Bootstrap analysis using 1,000 repetitions provided support for individual nodes (13).

Figure. Minimum-evolution tree (11) of coronaviruses based on a 146-bp fragment of the 3′ untranslated region of infectious bronchitis virus (IBV). Evolutionary distances were computed by using the Tamura-Nei method...

Phylogenetic analyses were based on a final usable sequence of 146 nt after removal of primer sites (Appendix Figure). Nucleotide distances between coronavirus sequences derived from this study were 0.0%–15.6%. Sequences detected in 3 pooled duck samples and a sequence derived from a pool of whooper swan samples clustered with sequence from an IBV H120 (Massachusetts) vaccine strain. Sequences within this cluster were relatively homogenous with low within-group distance values (0.0%–2.8%). Within this cluster, bootstrap support for the individual nodes was relatively low (Figure).

Coronavirus sequences detected in red knots clustered with a previously described goose coronavirus; divergence at the nucleotide level was 2.0%. Sequences from viruses detected in samples from Eurasian oystercatchers and ducks clustered with sequence from a published duck coronavirus (7). The sequence from Eurasian oystercatchers was identical to that of the published duck coronavirus; distance values within this cluster were 0.0%–1.0%.

Although samples were collected from wild bird populations comprising 46 species of wild birds from numerous and diverse habitats, coronavirus RNA was detected only in wildfowl (Anseriforms) and waders (Charadriiformes). Coronaviruses have been detected previously in wildfowl species, rock doves, wild peafowl, and some passerine species (4–7). All wild birds from which coronaviruses were detected in this study appeared to be healthy. Although IBV is recognized primarily as a respiratory agent, it has been demonstrated that certain strains are able to replicate in the chicken intestine without obvious clinical disease (15).

Phylogenetic analysis showed that coronavirus sequences detected by this study were genetically diverse. Virus sequences from 3 pools of fecal samples from ducks and whooper swans shared high nucleotide sequence identity with sequence from the IBV H120 vaccine strain, which is commonly used for the vaccination of commercial chickens worldwide. Coronaviruses sharing a high degree of identity with the IBV H120 vaccine strain have been detected previously in healthy, unvaccinated, domestic peafowl and as well as wild peafowl in China (4,5). These viruses may be revertant attenuated vaccine strains that have arisen as a result of the widespread use of IBV vaccines in the local poultry population in China. To understand their potential role as reservoirs of IBV strains, further surveillance for coronaviruses in wild bird populations is needed. It would be useful to determine the number and genome position of accessory genes of the coronaviruses detected in wild birds and to compare them with those of IBV. More detailed genetic characterization of the viruses detected including, for example, the S1 spike gene, is also needed. The detection of coronaviruses that appear to be related to IBV in wild migratory birds raises interesting questions as to their role in the transmission, dissemination, and evolution of IBV strains.

Dr Hughes is a researcher in the Department of Veterinary Pathology at the University of Liverpool. Her main research interest is infectious disease epidemiology.

This work was funded through the DEFRA Veterinary Teaching and Research Initiative program.