Influenza viruses are typically host specific; aquatic birds are considered the primary reservoir. However, interspecies transmission does occur (1–9) and occasionally leads to novel host-adapted strains. Interspecies transmission of influenza virus has been a public health concern because of the possibility that, through reassortment, a novel strain with zoonotic potential could emerge. The recent infection of dogs with equine influenza virus (H3N8) (2) and of swine with human influenza virus (H1N2) (4) are particularly intriguing because the former resulted in influenza becoming endemic in dogs and the latter resulted in a documented reassortment event between human and swine influenza viruses. Such concern has escalated with the recent emergence of the novel quadruple-reassorted influenza virus (H1N1) [pandemic (H1N1) 2009] in humans (10). Although infection and transmission of the virus have occurred primarily among humans, occasional transmission from infected persons to susceptible animals (e.g., swine, turkeys, ferrets) has been documented (11). The likelihood of pandemic (H1N1) 2009 infection of domestic pets has been considered less likely (www.cdc.gov/h1n1flu/qa.htm, www.avma.org/public_health/influenza/new_virus/default.asp, www.usda.gov/wps/portal/?navid=USDA_H1N1); however, we report a confirmed case of pandemic (H1N1) 2009 virus infection in a domestic cat that had been in contact with persons who had recently experienced influenza-like illness.

A 13-year-old, castrated male, domestic cat that lived indoors in a single-cat household was brought to the Iowa State University Lloyd Veterinary Medical Center because of depression, inappetance, and respiratory signs of 4 days’ duration. The cat was gregarious and interacted closely with family members in the household. The family members noted that the cat was reluctant to lie in lateral recumbency and instead rested in sternal recumbency with neck extended, which was indicative of dyspnea. The cat’s vaccination status was up to date. Before the onset of clinical signs in the cat, 2 of the 3 family members had experienced an undiagnosed influenza-like illness—an upper respiratory tract infection characterized by fever, coughing, and myalgia—that lasted 3 days. Onset of the cat’s clinical signs was noted 6 and 4 days after onset of illness for the first and second family members, respectively. 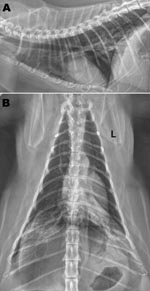 Figure. Radiographs of the thorax of a cat with confirmed influenza A pandemic (H1N1) 2009 virus infection. A) Right lateral view; B) dorsoventral view. Asymmetric soft tissue opacities are evident in the...

At the time of examination, the cat had bilateral adventitial lung sounds (wheezes), was afebrile, and was clinically dehydrated. Radiographs of the thorax showed a bilateral caudodorsal alveolar pattern (Figure). Cytologic and microbiologic examination of bronchoalveolar lavage (BAL) fluid showed foamy macrophages (65%), nondegenerate neutrophils (25%), and small lymphocytes (10%). Clinicopathologic findings suggested a moderate, predominantly macrophagic, mixed inflammatory process. Standard microbial culture of BAL aliquots yielded no substantial growth of aerobic or anaerobic bacteria. Radiographic and cytologic findings were inconsistent with bacterial or parasitic pneumonia and not supportive of allergic airway disease. A viral cause was considered most likely; however, the cat was given amoxicillin with clavulanate (125 mg orally 2×/day) to reduce the possibility of secondary bacterial pneumonia. Notable findings from laboratory testing (complete blood count, serum biochemistry, urinalysis, and total thyroxine measurement) were moderate leukopenia characterized by a moderate lymphopenia, modest hemoconcentration, and a slightly elevated thyroxine level. Lymphopenia was consistent with acute viral infection.

The cat was discharged from the medical center after diagnostic testing and correction of dehydration. A veterinarian (B.A.S.) visited the home to monitor the cat’s clinical status and administer subcutaneous fluids (120–160 mL) until the cat’s appetite improved; adventitial lung sounds resolved within 3 days. Reassessment 1 week later showed marked improvement of clinical signs but only modest improvement of the lymphopenia and radiographic findings.

Because the cat was from a single-animal household and remained indoors, he was presumably infected through contact with the family members. Attempts to retrospectively confirm pandemic (H1N1) 2009 infection in the family members have been unsuccessful, but additional testing of archived biologic samples is being conducted. Although more surveillance and studies are needed to determine susceptibility of companion animals to the pandemic (H1N1) 2009 virus, possible reverse zoonotic transmission (humans to animals) remains a concern. Indeed, cases in a domestic dog and other felids have been confirmed (11) (www.cdc.gov/h1n1flu/qa.htm, www.avma.org/public_health/influenza/new_virus/default.asp, www.usda.gov/wps/portal/?navid=USDA_H1N1). Implications of pandemic (H1N1) 2009 virus infection in companion animals are 1) apparent human-to-animal transmission; 2) broader host range for the virus; 3) potential endemic establishment of influenza in companion animals; 4) possible transmission of influenza from companion animals to other species, including humans; and 5) the need to reevaluate companion animals as potential reservoirs or intermediate hosts for reassortment of influenza virus. This case emphasizes the need for close monitoring for interspecies transmission of influenza virus and reinforces the need for collaboration among many disciplines, a cornerstone of the One Health Initiative (www.onehealthinitiative.com).

Dr Sponseller is an assistant professor in the Departments of Veterinary Clinical Sciences and Veterinary Microbiology and Preventive Medicine, College of Veterinary Medicine, Iowa State University. His research focuses on viral pathogens of domestic animals and acquisition of pulmonary immunocompetency.

We thank the family members in the cat’s household for their cooperation and Sarah Abate, Wendy Stensland, and Leslie Bower for technical assistance.

This study was supported by the Iowa State University Office of the Vice President for Research and Economic Development, the Iowa Healthy Livestock Initiative Research Grant, and the Center for Advanced Host Defenses, Immunobiotics and Translational Comparative Medicine.