Genotyping circulating rotaviruses before and after introduction of rotavirus vaccine is useful for evaluating vaccine-associated changes in genotype distribution. We determined frequency of rotavirus genotypes among 61 rotavirus-positive children hospitalized in Israel during the 2005–06 rotavirus season. Accurate molecular epidemiologic data were recovered from affinity-concentrated rotavirus immobilized in rotavirus-positive bands from air-dried, diagnostic rotavirus rapid test strips (dipstick) stored at room temperature from 1 week to 5 years. G genotypes were identical for 21 paired dipsticks and suspensions, whereas dipsticks or suspensions detected an additional G genotype in 2 samples. RNA sequences from 7 pairs were identical. Phylogenetic analysis suggested previously unreported G2 sublineages and G9 lineages. The ease with which dipsticks can be stored at local facilities and transported to central reference laboratories can reverse increasing difficulties in obtaining geographically representative stool samples and expand surveillance to regions lacking adequate laboratory facilities.

Rotavirus infection is a leading cause of gastroenteritis in children <5 years of age worldwide; children with severe dehydration and electrolyte imbalance require hospitalization (1). In 2007 and 2008, the annual economic cost for hospitalization of rotavirus case-patients in Israel was US $4,578,489 in direct costs to the health system plus an additional household cost of $3,101,955 (2). Poor hygienic conditions and lack of appropriate medical facilities in developing countries result in high infant mortality rates (1,3–5).

Simple to use, inexpensive, diagnostic rotavirus rapid test strips (dipsticks) identify group A rotavirus–positive stools in <30 minutes by lateral flow immunochromatography without indicating the genotype. Dipsticks are dipped into saline stool suspensions. If rotavirus is present, a colored band appears when indicator-linked rotavirus antibodies bind to the virus, and this complex is trapped on a band of membrane-bound rotavirus antibody on the dipstick. With their growing use at point-of-care facilities and in local hospital laboratories, fewer samples are available for genotyping by centralized reference laboratories. Obtaining geographically representative stool samples and expanding surveillance to regions lacking adequate laboratory facilities is becoming increasingly difficult. The ease with which dipsticks can be stored at local facilities and transported to central reference laboratories can help overcome these difficulties. We hypothesized that rotavirus trapped on rotavirus-specific antibody bands, equivalent to affinity concentrated rotavirus, might yield genotyping-quality RNA from dipsticks that are easily archived locally and transportable to centralized laboratories. In this study, our main objective was to determine the feasibility of recovering molecular epidemiologic data from rotavirus immobilized on air-dried diagnostic rotavirus dipsticks to compensate for the decreasing number of fecal samples reaching central reference laboratories.

Stool samples from 311 children hospitalized with acute gastroenteritis at Sheba Medical Center, Tel Hashomer, Israel, during May 15, 2005–May 15, 2006, were suspended in saline. Rotavirus dipsticks (Hy Laboratories LTD, Rehovot, Israel) were used to identify rotavirus-positive stool samples. (For comparison with rotavirus ELISA with Dako reagents [Dako Diagnostics LTD, Glostrup, Denmark], diagnostic dipsticks from Hy-Laboratories and Novamed [Novamed, Jerusalem, Israel] had sensitivities of 98.5% ± 3% and 92.3%, and specificities of 92.5% ± 1% and 93.5%, respectively [L.M. Shulman et al., unpub data].) The section of the dipstick containing the rotavirus-specific bands from 14 rotavirus-positive dipsticks that had been stored at room temperature for at least 1 week were excised and placed into 120 µL saline.

Sequences of the same genotype were truncated to the longest common length by using the Sequencher program (Genecodes, Ann Arbor, Michigan, USA). Nearest-neighbor phylogenetic trees were constructed from these sequences after the data were bootstrapped 1,000 times with Clustal X (13). The tree was analyzed by using NJplot (14). Sequences have been deposited in European Molecular Biology Laboratory/GenBank/DNA Data Bank of Japan under accession nos. FN298858–FN298875, FN582119–FN582124, and HQ174462–HQ174463. (Isolate names are linked to their specific accession numbers in the online Appendix Table, www.cdc.gov/EID/content/17/1/44-appT.htm).

This study was approved by the institutional review board of Chaim Sheba Medical Center (SMC-7606-09). Experiments were not performed on humans. All personal identification was removed from the remnants of fecal samples sent to the National Center for Viral Gastroenteritis for rotavirus analysis. The viral RNA used for this study was obtained from these anonymous samples.

We chose 18 rotavirus-positive clinical samples with which to study the feasibility of recovering molecular information from dipsticks. Thirteen were from children infected with 1 G genotype of rotavirus and 5 from children simultaneously infected with rotaviruses belonging to 2 different G genotypes. Of the 13 infections by a single G genotype, 8 were G1, 3 were G2, and 1 each were G3 and G9. All 5 mixed infections, RoV-24_ISR05, RoV_41_ISR05, RoV_56_ISR06, RoV_57_ISR06, and RoV_60_ISR06, were simultaneous infections with G1 and G9 genotypes. Mixed infections were identified by specific product size on gels and confirmed by partial sequencing of the G1 product for all 4 patients whose G9 sequences appear in the Figure.

Rotaviral VP7 RNA suitable for genotyping was also recovered from all 5 air-dried rotavirus-positive dipsticks that had been stored at room temperature for 5 years. The G genotypes of the rotavirus in the fecal suspensions from the 5 archived dipsticks from 2002 were unknown, and the suspensions were no longer available for comparison. One of the dipsticks was manufactured by Hy Laboratories; the remaining 4 were manufactured by Novamed. Initial amplification with generic G-type primers yielded generic G genotype amplification products of expected size (≈1,062 nt) upon gel electrophoresis. Three of the dipsticks yielded G3 RNA; the other 2 yielded G1 RNA. As proof of concept that P genotypes could be determined in addition to G genotypes, the P genotypes of RNA recovered from 2 of the 5-year-old rotavirus dipsticks with G3 RNA were also determined by direct sequencing of the RT-PCR products by using the generic P-type primers. Both were P[8] by sequence analysis (Table A). 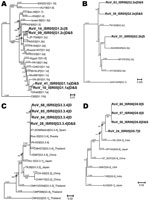 The G genotypes of 3 G1s, 2 G2s, 1 G3, and 1 G9 RNA extracted from dipsticks were confirmed by sequencing their heminested amplification products. Moreover, the sequences of the RNA extracted from each of the 7 dipsticks were identical to the sequence of the RNA extracted directly from the corresponding stool suspension. The lineages and sublineages of these and other isolates from the 2005–06 season were inferred from phylogenetic comparisons to equivalent segments of the 11 lineages of G1, the 2 lineages of G2, the 4 lineages of G3, and the 6 lineages of G9 described by Phan et al. (15), Page and Steele (16), Wang et al. (17), and Martinez-Laso et al. (18), respectively. The G3 phylogenetic tree also includes 3 sequences obtained from the 5-year-old dipsticks and 4 G3 isolates from among those with highest homology to G3 isolates from Israel identified in BLAST searches (http://blast.ncbi.nlm.nih.gov/Blast.cgi) (19). Specifically, all VP7 sequences for a given G genotype were aligned and truncated to the longest common segment. Four separate phylogenetic trees (Figure) were constructed because of the size difference between G genotype–specific heminested amplification products. The lineage or sublineage of each isolate from Israel (Table A) was inferred from the relative difference of each sequence compared with equivalent segments of previously determined lineages. For each genotype, a new lineage or sublineage was suggested when the sequence from Israel failed to closely group with the equivalent segment of >1 reference strains and the nucleotide differences between the strain from Israel and the reference strains were similar or greater than the differences among reference lineages and sublineages. The existence of such new lineages and sublineages would need to be confirmed with longer full-length open reading frame sequences. Finally, sequences from RNA recovered from dipsticks and/or from saline suspensions were used in BLAST searches to identify the most similar contemporary sequences. G1 isolates were most similar to isolates from Europe, the Far East, and South America; G2 isolates to isolates from the Far East; and G3 isolates to isolates from Europe and the Far East (Figure). G9 isolates were most similar to isolates from Africa, Europe, and the Far East.

In conclusion, air-dried affinity-concentrated virus from rotavirus-positive bands of dipsticks yielded RNA suitable for G genotyping and sequencing, even for dipsticks stored at room temperature for 5 years. Even though P genotyping and sequencing was performed only on RNA isolated from 2 of the 5-year old dipsticks, it is reasonable to assume that P genotyping and sequencing would have been possible for the rest based on the equivalent quality of the RNA extracted from the dipsticks and RNA extracted from stool suspensions. Thus, dipsticks can be used for recovery of molecular epidemiologic data by reference laboratories from diagnostic tests routinely performed in many clinical laboratories and point-of-care facilities. RNA extracted from these archived dipsticks will enable centralized laboratories to easily recover epidemiologically useful data from the samples of other laboratories and from regions lacking adequate laboratory facilities. In addition, centralized laboratories will be able to assess whether the introduction of universal rotavirus vaccination changed the distribution of rotavirus genotypes associated with severe rotavirus-associated acute gastroenteritis.

Dr Shulman is head of the Environmental Virology Laboratory and the National Center for Viral Gastroenteritis in the Central Virology Laboratory, Public Health Services Laboratory, Israel Ministry of Health and a senior lecturer in the Department of Epidemiology and Preventive Medicine, School of Public Health, Sackler Faculty of Medicine, Tel Aviv University. His primary research interests include molecular epidemiology of polio and nonpolio enteroviruses and viruses that cause acute gastroenteritis, genomic reorganization in human BK polyomavirus after organ transplantation, and poliovirus environmental surveillance.

We dedicate this article to the memory of J.M. Paswell of the Department of Pediatrics, Chaim Sheba Medical Center, Tel Hashomer, Israel. Portions of this study were started in collaboration with him, and he contributed to its initial planning.

GlaxoSmithKline provided J.M. Paswell with the funds to purchase the RT-PCR primers used for the rotavirus genotyping in this study. GlaxoSmithKline had no role in study design, data collection and analysis, decision to publish, or preparation of the manuscript. The Israel Ministry of Health funded all expenses except the primers.