Surveillance of Staphylococcus aureus infections in 3 northern remote communities of Saskatchewan was undertaken. Rates of methicillin-resistant infections were extremely high (146–482/10,000 population), and most (98.2%) were caused by USA400 strains. Although USA400 prevalence has diminished in the United States, this strain is continuing to predominate throughout many northern communities in Canada.

Over the past decade, community-associated methicillin-resistant Staphylococcus aureus (CA-MRSA) infections have rapidly emerged in Canada (1). These CA-MRSA strains are causing infections in often young otherwise healthy persons with no traditional health care–associated risk factors (2), linked with increased illness severity and deaths (3), and now entering and being disseminated within health care facilities (4). In comparison to the incidence of CA-MRSA infections in large urban centers across Canada, which has been addressed through the ongoing efforts of the Canadian Nosocomial Infection Surveillance Program (1), little attention has been directed at the emerging problem of CA-MRSA or CA-methicillin-susceptible S. aureus (MSSA) in rural and northern communities of Canada. In this study, active surveillance was undertaken in 3 remote northern communities to assess the prevalence and effects of MRSA and MSSA infections. 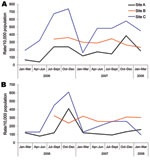 Figure 1. Crude rates of community-acquired methicillin-resistant Staphylococcus aureus (A) and methicillin-susceptible S. aureus (B) infections per 10,000 population in 3 select communities (sites A, B, and C) of northern Saskatchewan, Canada.

Clinically significant MRSA and MSSA isolates, identified during January 2006–March 2008, within 3 select communities (sites A–C) in northern Saskatchewan were included in this surveillance study. Site B also included 1 adjoining community, and sites A and B also included additional First Nations Reserves serviced by the community. Each site faced significant socioeconomic challenges. A total of 1,280 isolates, obtained from skin and soft tissue infections (SSTIs), urinary tract infections, upper respiratory tract infections, and lower respiratory tract infections, were identified as S. aureus. A high proportion of these isolates, 692 (54.1%) of 1,280, were MRSA. Over the 2-year study period, rates of MRSA and MSSA infections in the 3 communities ranged from 146–482/10,000 and 112–329/10,000 population, respectively. Trends of seasonality were apparent for MRSA infections, with the highest rates being observed in the third and fourth quarters of the year (Figure 1). Overall, the highest quarterly rates of MRSA and MSSA infections were observed at site C, with 738/10,000 and 610/10,000 population, respectively.

A subset of 665 isolates were further characterized by antimicrobial drug susceptibility testing (Table 1). In comparison to MSSA, MRSA were significantly more likely to be susceptible to clindamycin, erythromycin, fusidic acid, and gentamicin, but were more likely to be resistant to mupirocin (Table 1). In regards to the clindamycin-resistant isolates, 3 (18.8%) of the 16 MRSA isolates and 73 (93.6%) of the 78 MSSA isolates were inducible. For mupirocin-resistant isolates, all 328 of the MRSA isolates, but only 54 (70.1%) of the 77 MSSA isolates, displayed high level resistance (>128 μg/mL).

USA400 was by far the predominant strain type in all 3 communities, accounting for >98% of the MRSA isolates. USA400 was first reported in Manitoba as an outbreak in the southern region in the late 1990s, but has since spread to the northern regions of the province from 2000 to 2004 (9). USA400 was thereafter seen in a central eastern Saskatchewan community adjacent to the Manitoba border (2) and has since disseminated as far north as Nunavut (10) and southwestern Alaska (11).

Because MRSA and MSSA SSTIs tended to be identified more frequently from different body sites, it is appealing to speculate that CA-MRSA strains, such as USA400, might also colonize different body sites (e.g., axillae or intestines) more efficiently than other strains of S. aureus. This hypothesis coincides with a recent report in which nasal colonization was less likely in patients with CA-MRSA SSTIs than in those with hospital-acquired MRSA SSTIs (12). Intestinal carriage of S. aureus has been implicated as a risk factor for infection (13) and could be a strong contributor to environmental dissemination and transmission (14). This possibility was recently further supported by the results of a study in which the rectal carriage, but not nasal carriage, of USA300 was strongly associated with SSTIs in children (15). Further study is required to determine whether specific lineages of S. aureus are more proficient colonizers at non-nasal colonization sites, what host/bacteria genetic factors are involved, and whether this colonization plays a role in the high success of these CA-MRSA strain types.

To address the high rates of S. aureus infections in northern Saskatchewan, physician treatment algorithms and educational materials have been provided throughout many northern communities and schools in Saskatchewan. These materials are all freely available (www.narp.ca) and are intended to promote proper antimicrobial drug usage and hygiene to diminish the spread of S. aureus disease.

Funding for this study was provided by the Canadian Institutes of Health Research and the Public Health Agency of Canada.

1Members of the Northern Antibiotic Resistance Partnership are listed at the end of this article.