During systematic active surveillance of the causes of diarrhea in patients admitted to the Infectious Diseases and Beliaghata General Hospital in Kolkata, India, we looked for 26 known gastrointestinal pathogens in fecal samples from 2,748 patients. Samples from about one-third (29%) of the patients contained multiple pathogens. Polymicrobial infections frequently contained Vibrio cholerae O1 and rotavirus. When these agents were present, some co-infecting agents were found significantly less often (p = 10–5 to 10–33), some were detected significantly more often (p = 10–5 to 10–26), and others were detected equally as often as when V. cholerae O1 or rotavirus was absent. When data were stratified by patient age and season, many nonrandom associations remained statistically significant. The causes and effects of these nonrandom associations remain unknown.

The estimated worldwide death rate from diarrheal diseases is ≈2.2 million deaths per year (1). Diarrheal infections may be caused by an array of bacterial, viral, or parasitic pathogens. Some cases have 1 single defined cause, others do not have any defined cause, and a substantial number (one third) are caused by multiple pathogens (2). Because each known diarrheal pathogen fulfills Koch’s postulates and is capable of being the sole etiologic agent causing disease, multiple pathogens are not essential for causing disease. How additional pathogens cause and contribute to the disease process is unknown. The source of the multiple pathogens in a patient could simply result from multiple pathogens in an urban environment of crowded, impoverished conditions. If the various pathogens occurred independently in cases of disease, then each pathogen in a polymicrobial infection would be expected to occur in proportion to its presence in all patients with severe diarrhea.

In Kolkata, India, a megacity with a population >10 million, many persons live in crowded urban slums. Medical attention is available at the Infectious Disease and Beliaghata General Hospital, which serves the population of Kolkata. To determine the extent of disease caused by various bacterial, viral, and parasitic pathogens of the gastrointestinal tract, the National Institute of Cholera and Enteric Disease is conducting a systematic survey of patients hospitalized for diarrhea at this hospital. Analyses conducted after 2 years of data collection revealed that approximately one-third (29%) of patients had polymicrobial infections (2); an earlier report from that ongoing study indicated that the 3 parasites detected most often (in 73% of patients with polymicrobial infections) were Giardia lamblia, Entamoeba histolytica, and Cryptosporidium spp (3). We used data from the same ongoing survey to identify gastrointestinal tract pathogens in the feces of patients with severe diarrhea and to examine the relationships between co-infections of Vibro cholerae O1 and rotavirus with other bacterial, viral, and parasitic pathogens.

Details of sample collection and microbiological analyses have been published (2). The protocol has been approved by the Institutional Review Board at the National Institute of Cholera and Enteric Disease. Briefly, fecal specimens were collected systematically from patients entering the hospital from November 2007 through February 2010. Of note, the previous study analyzed data through October 2009; however, the systematic sampling is still ongoing. The specimens were collected from every fifth patient with diarrhea on 2 randomly selected days each week. Only patients with diarrhea (defined by World Health Organization guidelines as passage of >3 loose or liquid stools per day or more frequently than is normal for the person) were eligible for inclusion in the study. Samples were collected from an average of 5.6% of eligible patients.

To test for possible associations, we used the Fisher exact test to compare pairs of pathogens (1, both, or neither) with an independent assortment based on the overall frequency with which pathogens were detected. To establish criteria for statistical significance, we calculated p values, odds ratios (ORs), and 95% confidence intervals (CIs). Additional covariates were collected and examined for confounding and interaction. These included patient age, gender, residence, and religion and season of infection. Seasons were defined as summer (March–June), monsoon (July–October), and winter (November–February). All analyses were conducted by using SAS version 9.2 (SAS Institute, Cary, NC, USA). 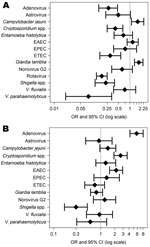 Rotavirus was detected in 594 of the fecal samples and was the sole pathogen found in 253 of them. Rotavirus and at least 1 other gastrointestinal pathogen were found in 341 samples; 119 samples were co-infected with rotavirus and >2 other pathogens. When the effect of rotavirus co-infection with other pathogens was tested (Figure, panel B), Shigella spp. were significantly less likely to be found in samples with rotavirus than in samples without rotavirus (OR 0.30, 95% CI 0.17–0.52). In contrast, EAEC, Cryptosporidium spp., and adenovirus were significantly increased in samples with rotavirus (p = 6.15 × 10–6 to 1.61 × 10–26; ORs 2.14–5.80. A significant effect was not observed for G. lamblia, C. jejuni, EPEC, ETEC, V. parahaemolyticus, V. fluvialis, E. haemolyticus, astrovirus, and NVGII. Tests for association were not performed for Salmonella spp., NVG1, Aeromonas spp., B. hominis, C. coli, sapovirus, V. cholerae non-O1, V. cholerae non-O139, and V. cholerae O139 because the low number of patients infected with those pathogens resulted in insufficient power. Analysis of samples from patients infected simultaneously with G. lamblia, V. cholerae, and rotavirus (n = 41) revealed that the frequency of co-infection with G. lamblia was not significantly affected by co-infection with V. cholerae O1 and rotavirus (p = 0.08).

Our analyses revealed that co-occurrence of gastrointestinal pathogens in feces of patients with polymicrobial infections and severe diarrhea necessitating hospitalization was not in proportion to the pathogens’ presence in all patients with diarrhea. Tests for association were performed with V. cholerae O1 and rotavirus because they were the most commonly detected pathogens and, hence, had the greatest power to detect an association with the other pathogens. Some combinations of pathogens occurred less frequently than expected (e.g., V. cholerae and rotavirus [OR 0.18, 95% CI 0.13–0.25]); some combinations appeared more frequently than expected (e.g., rotavirus and adenovirus [OR = 5.8, 95% CI 4.20–7.99]), and some combinations occurred at the same frequency whether with or without V. cholerae or rotavirus. After adjustment for age and season, these variables often acted as confounders or effect modifiers, but in general the associations remained significant. However, many of the stratified analyses had small numbers for comparison.

V. cholerae O1 exhibited a positive association with only G. lamblia, suggesting that something may be unique about the co-occurrence of those 2 gastrointestinal pathogens. In support of that idea are 1) a report that co-infection with G. lamblia and V. cholerae results in G. lamblia being present in trophozoite form rather than in the cyst form found in feces of control patients (10), and 2) a previous finding that G. lamblia trophozoites can bind cholera toxin (11). Alternatively, each is a pathogen with substantial environmental reservoirs, and the positive association may simply represent acquisition of both pathogens from the same environmental source.

Phylogenetic relatedness alone does not explain the apparent competitive inhibition or negative association that we found between V. cholerae and other pathogens. For example, although the closely related V. cholerae O1 and V. parahaemolyticus exhibited a 10-fold negative association, V. fluvialis, which is phylogenetically only slightly farther from V. cholerae O1 than is V. parahaemolyticus, did not show any inhibition in the presence of V. cholerae. Also, although 2 members of the family Enterobacteriaceae (Shigella spp. and ETEC) were found less frequently than expected in combination with V. cholerae O1, 2 other members of that family (EPEC and EAEC) occurred in the expected proportion in samples from patients with mixed V. cholerae O1 infections.

Rotavirus had multiple strong positive associations (ORs >2) with the other gastrointestinal pathogens detected in the fecal samples, even after considering age and season. The positive association of rotavirus, an RNA virus that affects cells covered in microvilli, and adenovirus, a DNA virus that affects cells that are dividing to generate new cells with microvilli, may represent an interaction between pathogens to cause more severe diarrhea (in our sample all patients were hospitalized) in patients 15–45 years of age (OR 10.81, 95% CI 5.63–20.78) or a way to escape or circumvent immunity from previous exposures. In a previous study, Koh et al. (12) found that among children in Korea with virus-caused diarrhea, adenoviruses occurred preferentially in the presence of rotavirus and that rotavirus and norovirus, although most common, occurred in polymicrobial infections in proportion to their numbers in the samples. Both observations are consistent with the results of our study. Furthermore, Bilenko et al. (13) observed that among Bedouins, G. lamblia was frequently found in polymicrobial infections and, when present with rotavirus, produced less severe diarrhea than rotavirus alone. In addition, Souza et al. (14) found that among young children in São Paulo, those with rotaviral and bacterial co-infections were more likely to have severe diarrhea than were children infected with either pathogen alone. However, the study had insufficient power to examine differences among bacterial pathogens, as did the rest of the studies of rotavirus infections mentioned in a recent review (15).

The presence of multiple pathogens in one third of patients with diarrhea has potential implications for treatment and raises several questions. Do cases of diarrhea caused by V. cholerae or rotavirus and a second pathogen differ from those caused by V. cholerae or rotavirus alone? Does 1 pathogen lead the way for another to successfully infect a person? Do the pathogens behave synergistically to escape immunologic detection? Because the cross-sectional nature of our study did not enable us to investigate the temporal sequence of pathogen infection, future research is needed to provide more evidence concerning the causal pathway(s). Also, the clinical significance of our findings must be more rigorously evaluated by studies that include infected patients and controls. A more substantive investigation into how age and season might affect polymicrobial infections should also be conducted.

Ms Lindsay is a PhD candidate working on her dissertation in epidemiology and public health at the University of Maryland. Her research interest is international collaborations focusing on enteric diseases.

Funding for this study was provided by The Ministry of Education, Culture, Sports, Science and Technology of Japan; the Indian Council Medical Research; and the Bill and Melinda Gates Foundation.