Central venous catheters, often needed by cancer patients, can be the source of Nocardia bacteremia. We evaluated the clinical characteristics and outcomes of 17 cancer patients with Nocardia bacteremia. For 10 patients, the bacteremia was associated with the catheter; for the other 7, it was a disseminated infection. N. nova complex was the leading cause of bacteremia. Nocardia promoted heavy biofilm formation on the surface of central venous catheter segments tested in an in vitro biofilm model. Trimethoprim- and minocycline-based lock solutions had potent in vitro activity against biofilm growth. Patients with Nocardia central venous catheter–associated bloodstream infections responded well to catheter removal and antimicrobial drug therapy, whereas those with disseminated bacteremia had poor prognoses.

Nocardiae are partially acid-fast, aerobic, gram-positive, branching filamentous bacteria that are found ubiquitously in soil, fresh water, and marine water (1,2). Nocardia spp. cause serious pulmonary infections (with occasional brain abscesses) in immunocompromised patients, primarily those with cell-mediated immunity abnormalities (2,3). Nocardiosis most commonly occurs after the organism has been introduced into the respiratory tract, but it may be acquired through direct inoculation into the skin (4). However, Nocardia bacteremia is rarely reported, even for severely immunocompromised patients with underlying malignancies (5,6).

Neutropenia was defined as an absolute neutrophil count <500 cells/mm3 and lymphopenia as an absolute lymphocyte count <1,000 cells/mm3. Patients with at least 1 set of positive blood cultures for Nocardia bacteria were considered to have Nocardia bacteremia. CLABSIs were diagnosed according to Centers for Disease Control and Prevention (Atlanta, GA, USA) guidelines: a recognized pathogen cultured from >1 blood cultures (not including organisms considered common skin contaminants) and no apparent source of the bloodstream infection except the CVC whereby the CVC has been indwelling for >48 hours (9). Furthermore, CLABSIs were considered definite CRBSIs if at least 1 of the Infectious Disease Society of America definition criteria were also fulfilled: semiquantitative (>15 CFUs/catheter segment) or quantitative (>103 CFUs/catheter segment) catheter culture in which the same organism is isolated from the catheter segment and peripheral blood, or differential quantitative blood culture with simultaneous quantitative blood cultures from the CVC and peripheral blood with a ratio >3:1 (10). Disseminated (or secondary) Nocardia bacteremia was defined as the recovery of Nocardia bacteria from blood cultures and a non–catheter-related site (e.g., expectorated sputum, endotracheal aspiration, bronchoalveolar lavage, pleural effusion, lung tissue, or skin or brain biopsy samples) in the setting of clinical and radiographic evidence of organ involvement (pneumonia and skin lesions).

Nocardia spp. were identified on the basis of the appearance of colonies on routine media; species were identified by using a battery of biochemical tests and, after 2001, by 16S rDNA sequencing (11,12). Blood cultures and catheter tip samples were held for 7 days to ensure that no cases of Nocardia bacteremia were missed.

A broth microdilution MIC method had been used to perform susceptibility testing of Nocardia spp. according Clinical and Laboratory Standards Institute guidelines (13). Antimicrobial drug response had been defined as resolution or improvement of clinical manifestations and radiographic changes and negative microbiological findings.

We used a modified Kuhn model of biofilm catheter colonization (14) to test N. nova complex and N. puris strains (that caused CLABSI in this study) for biofilm formation. Sterile polyurethane and silicone CVC segments were placed in 24-well tissue culture plates containing human donor plasma and incubated with shaking for 24 h at 37°C. The plasma was then replaced with 1 mL of 5.5 × 105 cells/mL inoculum of Nocardia strains. The Nocardia inoculum was grown in tryptic soy broth containing 10% fetal bovine serum and incubated with shaking for 24 h at 37°C. Organisms were tested in triplicate. The inoculated broth was removed, and CVC segments were washed with 1 mL of 0.9% sterile saline by shaking at 100 rpm for 30 min at 37°C. The CVC segments were transferred into a tube containing 5 mL of sterile 0.9% saline and sonicated for 15 min to disrupt any biofilm. The resulting solution was then cultured and quantified by making serial dilutions in 0.9% sterile saline and spreading them on trypticase soy agar plates with 5% sheep blood. All plates were inverted and incubated for 48 h at 37°C. The experiment was repeated 2 times.

To determine whether antimicrobial lock solutions prevented the biofilm growth of Nocardia organisms, we used the silicone disk biofilm colonization model, as described (14). After washing the silicone disks with 0.9% sterile saline by shaking them for 30 min at 37°C, we transferred the disks into new 24-well tissue culture plates containing Mueller-Hinton broth (control) or the drug solution to be tested. Drug solutions included 10 mg/mL trimethoprim/sulfamethoxazole and 100 U heparin; a triple combination of 10 mg/mL trimethoprim, 30 mg/mL EDTA, and 25% ethanol; and 3 mg/mL minocycline, 30 mg EDTA, and 25% ethanol. Triple combinations of minocycline, EDTA, and 25% ethanol lock solutions were used because previous data showed that such combinations effectively eradicate bacterial organisms embedded in biofilm (15). After 2 h of incubation at 37°C, the disks were placed in 5 mL of 0.9% saline and sonicated for 15 min. Finally, they were vortexed for 5 seconds, and 100 µL of liquid from each disk was serially diluted and spread on trypticase soy agar plates with 5% sheep blood for quantitative culture. Plates were then inverted and incubated for 48–72 h at 37°C, and colony growth was quantified. The experiment was repeated 2 times.

To compare the characteristics of Nocardia CLABSI and disseminated Nocardia bacteremia patients, we used SAS version 9.1 (SAS Institute, Inc., Cary, NC, USA). We determined differences between categorical variable frequencies by using the χ2 or Fisher exact tests and compared continuous variables by using the Wilcoxon rank-sum test. All tests were 2-sided and had a maximum significance level of 0.05.

The demographic characteristics and outcomes of the 17 patients in the study are shown in Table 1. All patients had had CVCs inserted before examination and collection of blood for culture. Ten (59%) patients had CLABSIs (Table 2); the remaining 7 (41%) had disseminated (secondary) Nocardia bacteremia for which the respiratory tract (pneumonia) was the primary source. Concomitant infections, most commonly with cytomegalovirus, were noted for 10 (59%) patients. Hematologic malignancies were more common in patients with disseminated Nocardia bacteremia than with Nocardia CLABSIs (100% vs. 50%; p = 0.044). N. nova complex was the most commonly identified causative species for nocardemia (6 patients). Other causative species were N. asteroides complex (5 patients), N. veterana (2), N. brasiliensis (1), and N. puris (1). We found no significant differences in species distribution among patients with CLABSIs and disseminated bacteremia. Furthermore, by looking at the temporal distribution of cases of Nocardia bacteremia and CLABSI nocardemia, we noticed no cluster that would suggest we were dealing with an outbreak.

All Nocardia isolates were susceptible to trimethoprim/sulfamethoxazole, amikacin, and linezolid. Susceptibility rates to ceftriaxone, clarithromycin, imipenem, minocycline, tobramycin, and amoxicillin and clavulanate were 91%, 87%, 85%, 55%, 42%, and 22%, respectively. All N. nova isolates were susceptible to clarithromycin. No resistance to minocycline was found, but 45% of isolates had intermediate susceptibility MICs. N. nova complex isolates showed resistance to amoxicillin and clavulanate and to gentamicin in 80% and 60% of cases, respectively, whereas 91% of all Nocardia species were resistant to ciprofloxacin.

All patients underwent CVC removal. The most commonly used drug was trimethoprim/sulfamethoxazole (14 patients), used alone or in combination with beta-lactams (8 patients with carbapenems and 2 with ceftriaxone), minocycline (5 patients), or amikacin (4 patients). A positive response occurred in 14 patients, and breakthrough Nocardia bacteremia occurred in 3 patients receiving trimethoprim/sulfamethoxazole prophylaxis (2 with CLABSIs and 1 with disseminated bacteremia). 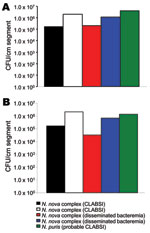 Nocardia isolates adhered extensively to polyurethane and silicone CVCs and formed extensive biofilms (Figure 1). Quantitative biofilm cultures isolated ranged from 4.0 × 105 to 1.1 × 107 CFUs of tested Nocardia cells from biofilm matrices that adhered to polyurethane and silicone CVC surfaces. Furthermore, trimethoprim/sulfamethoxazole with heparin, minocycline, and EDTA in 25% ethanol, and trimethoprim and EDTA in 25% ethanol significantly decreased the biofilm biomasses on treated vs. control plates after a 2-hour exposure (p = 0.003), resulting in complete eradication of Nocardia spp. in biofilm on silicone disks (Figure 2). 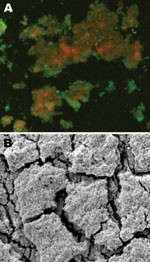 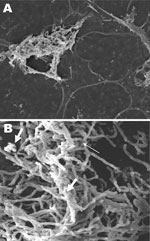 We have documented that Nocardia spp. that cause clinical CLABSI also form heavy biofilm on the surfaces of polyurethane and silicone CVCs; that trimethoprim- and minocycline-based lock solutions eradicate adherent catheter-related Nocardia spp. in the biofilm matrix (thereby demonstrating Koch’s postulate as it relates to Nocardia CLABSI); and that Nocardia bacteremia in cancer patients can occur as CLABSI in 59% of cases. Nocardia CLABSI responds well to antimicrobial agents and CVC removal and is associated with a short hospital stay, whereas disseminated Nocardia bacteremia is associated with a poor prognosis.

Nocardia CLABSI cases, in contrast to disseminated Nocardia bacteremia cases, were associated with a favorable outcome. Catheter-related Nocardia bacteremia might be less likely to invade remote anatomical structures and form deep-seated infections. Disseminated Nocardia bacteremia, on the other hand, was associated with higher rates of admission to intensive care units, more frequent occurrence with hematologic malignancy, longer hospital stays, and lower antimicrobial therapy response rates. Factors that could have contributed to the poor outcome include involvement of the lungs and other organs; severity of the underlying disease (hematologic malignancy); and a higher rate of concomitant infections, most commonly with cytomegalovirus and invasive fungi (Table 1).

Intraluminal antimicrobial lock therapy has been proposed for the prevention and treatment of CLABSIs (24–27). For antimicrobial lock therapy, the catheter lumen is filled with 2–4 mL of antimicrobial solution at a concentration 100- to 1,000-fold higher than the MIC of the drug or its usual target systemic concentration; to eradicate the organisms embedded in the intraluminal biofilm, the solution is then allowed to dwell (lock) while the catheter is not in use (27). We found antimicrobial catheter lock solutions with active agents such as trimethoprim/sulfamethoxazole or minocycline to be effective against Nocardia biofilm. Use of these solutions might be a valid way to prevent Nocardia CLABSIs and salvage the CVC, particularly in cancer patients with CLABSI, for whom removal of the CVC might not be possible because of severe thrombocytopenia or lack of other vascular access.

In agreement with previous results, our findings also confirmed in vitro activity of trimethoprim/sulfamethoxazole, amikacin, and linezolid against Nocardia spp (17,28–31). However, in our study, N. nova complex was characterized by its susceptibility to clarithromycin and resistance to amoxicillin and clavulanate. This distinctive characteristic of N. nova complex is associated with the presence of membrane-bound penicillinase inducible by clavulinic acid (17,27). N. veterana had an antimicrobial drug susceptibility profile similar to that of N. nova complex. No minocycline resistance was observed, but 45% of isolates had intermediate susceptibility MICs, as has been reported (32–34).

Dr Al Akhrass recently completed an infectious disease fellowship at The University of Texas MD Anderson Cancer Center and is board certified in internal medicine. His research interests include catheter-related infections and biomarkers and infection.