To identify unknown human viruses in the enteric tract, we examined 105 stool specimens from patients with diarrhea in Bangladesh. A novel calicivirus was identified in a sample from 1 patient and subsequently found in samples from 5 other patients. Phylogenetic analyses classified this virus within the proposed genus Recovirus.

Diarrhea, characterized by frequent liquid or loose stools, commonly results from gastroenteritis caused by infection with bacteria, parasites, or viruses. Patients with mild diarrhea do not require medical attention; the illness is typically self-limited, and disease symptoms usually resolve quickly. However, diarrheal diseases can result in severe illness and death worldwide and are the second leading cause of death around the world in children <5 years of age, particularly in low- and middle-income countries (1). For many cases of diarrhea in humans, no causative agent is identified.

In recent years, many novel viruses have been identified in human and animal blood, respiratory secretions, and fecal material through viral metagenomic studies consisting of random amplification in combination with next-generation sequencing methods (2–5). To identify unknown human viruses in the enteric tracts of persons with diarrhea, we performed sequence-independent amplification on purified viral nucleic acid from fecal samples obtained from patients with diarrhea in Bangladesh (6,7). We identified a novel calicivirus and classified it in the proposed genus Recovirus. Caliciviruses, which are nonenveloped, positive-stranded RNA viruses with a polyadenylated genome οf ≈6.4–8.4 kb, cause illness in animals and humans (8,9), including gastroenteritis in humans. The family Caliciviridae consists of 5 genera, Norovirus, Sapovirus, Lagovirus, Vesivirus, and Nebovirus, and 3 proposed genera, Recovirus, Valovirus, and chicken calicivirus (8–10).

Each year, >100,000 diarrhea patients are admitted to the Dhaka hospital of the International Centre for Diarrheal Disease Research, Bangladesh (ICDDR,B). Fecal samples from 2% of these patients are collected and examined as part of systematic routine surveillance system for the presence of enteric pathogens (11). All procedures were performed in compliance with relevant laws and institutional guidelines and in accordance with the Declaration of Helsinki.

Stool specimens from a subset of patients from routine surveillance during 2007–2009 (1,614 samples total) were available for further studies. These specimens were prescreened for adenovirus and rotavirus A by using TaqMan EZ RT-PCR Core Reagents (Applied Biosystems, Foster City, CA, USA), rotavirus primers RVNSP3R and RVNSP3F and probe 5′-FAM-AGTTAAAAGCTAACACTGTCAAA-TAMRA-3′ (12), and TaqMan Universal Mastermix (Applied Biosystems) (13). Sequence-independent nucleic acid amplification and next-generation sequencing were performed on 105 stool specimens from diarrhea patients enrolled during 2007 by using a 454 GS Junior Instrument (Roche, Indianapolis, IN, USA) as described (6,7). More than 725,000 trimmed reads were assembled by using de novo assembly and analyzed according to BLAST searches (Technical Appendix Figure 1 and Table 1) (6,7). Sequences were classified on the basis of the taxonomic origin of the best-hit sequence (6,7). An E (expect) value of 0.001 was used as cutoff value of significant virus hits. The largest proportion of virus-related sequences in human diarrhea samples from Bangladesh in 2007 was related to known bacteriophages and mammalian viruses (Technical Appendix Figure 1). 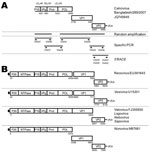 One sample, no. 289, yielded a novel mammalian virus from the family Caliciviridae that we further characterized by near full-length genome sequencing using random amplification with next-generation sequencing, specific reverse transcription PCRs, and 3′ rapid amplification of cDNA ends PCR (Figure 1, panel A) as described (6,7). We named the virus isolate calicivirus Bangladesh/289/2007 (GenBank accession no. JQ745645). 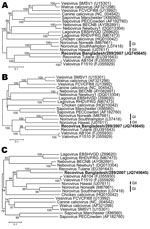 Figure 2. . Neighbor-joining phylogenetic trees of the amino acid sequences of the partial polyprotein sequence (A), viral protein (VP) 1 (B), and VP2 (C) capsid proteins of selected representative caliciviruses and the...

The Caliciviridae genome encodes a polyprotein precursor for nonstructural proteins, and 2 structural capsid proteins, viral protein (VP) 1 and VP2, from 2 or 3 open reading frames (ORFs) (Figure 1, panel B) (8,9). The genome organization of Bangladesh/289/2007 is most closely related to that of viruses in the genus Norovirus, with ORF2 encoding VP1 overlapping with ORF1 (Figure 1). The partial polyprotein precursor and complete VP1 and VP2 proteins were aligned with corresponding sequences of representative caliciviruses. Divergence analysis demonstrated that the calicivirus Bangladesh/289/2007 showed 57.7%, 49.5%, and 53.1% amino acid identity in the polyprotein, VP1, and VP2, respectively, to its closest relative, Recovirus Tulane (GenBank accession no. EU391643), which was identified from rhesus macaques (Table 1; Figure 2).

Additionally, on the basis of the identity profiles of noroviruses (14)—strains, genotypes, and genogroups showed 85.9%–100%, 56.2%–85.7%, and 38.6%–55.1% identity, respectively—Bangladesh/289/2007 may represent a new genogroup in the proposed genus Recovirus. This conclusion was corroborated by comparison of a partial RNA-dependent RNA polymerase (RdRp) sequence of calicivirus Bangladesh/289/2007 to known recovirus RdRp sequences (Technical Appendix Figure 2).

We performed a diagnostic real-time recovirus PCR targeting the RdRp of all 1,614 available samples from patients with diarrhea (11). Reverse transcription PCR–grade viral nucleic acid was extracted by using the MagNA Pure LC Total Nucleic Acid Isolation Kit (Roche) and amplified by using reverse transcription PCR with primers VS665 and VS666 and probe VS664 (Technical Appendix Table 2) and TaqMan EZ RT-PCR Core Reagents (Applied Biosystems). The cycling program consisted of 50°C for 2 min, 60°C for 30 min, 95°C for 5 min, and 50 cycles of 95°C for 20 s and 59°C for 1 min, resulting in a 164-bp amplicon.

In addition to sample 289, 5 other human diarrhea samples (Table 2) were sequence-confirmed to be positive for a recovirus, with high homology (>98%) to calicivirus Bangladesh/289/2007; this finding indicates that recovirus Bangladesh infects humans. Clinical data indicate that all patients with a recovirus present in their feces had 6 to >21 watery stools in the first 24 hours after illness onset (Table 2); 4 patients experienced vomiting and 2 patients had fever. Patient ages ranged from 3 months to 50 years. Three recovirus-positive patients showed evidence of co-infection with other pathogens that are known to cause diarrhea in humans, such as rotavirus A, adenovirus, Vibrio cholerae, or Salmonella spp.; the other 3 patients did not. Although viruses such as norovirus, sapovirus, and astrovirus were not detected in the recovirus-positive samples by sequence-independent amplification assays, all samples were not analyzed for all known enteric pathogens. Of 514 diarrhea samples gathered by the Diagnostic Unit, Department of Virology, Erasmus Medical Center, Rotterdam, the Netherlands, for diagnosis of gastrointestinal infections during 2007 and 2009, none was positive for Recovirus Bangladesh (data not shown).

For a large proportion of human diarrhea cases, no etiologic agent can be identified, despite multiple metagenomic studies of viruses in human stool aimed at identifying new etiologic agents (3–5). In addition, it cannot be known when and where emerging and reemerging viruses will appear in the human population. To identify potential etiologic agents of diarrhea in humans, we performed a metagenomic viral inventory in diarrhea samples from Bangladesh, which led to the identification of a novel calicivirus.

In conclusion, this identification of a novel calicivirus, classified as Recovirus Bangladesh/289/2007, from human diarrhea samples provides PCR-based evidence that recoviruses can infect humans. A previous study found high prevalence of virus-neutralizing antibodies against a closely related calicivirus, Recovirus Tulane, in serum samples from animal caretakers (15). Larger epidemiologic studies using genetic and serologic screening will be necessary to provide more insight into the distribution and pathogenic potential of recoviruses in humans.