A member of the family Coronaviridae, genus alphacoronavirus, porcine epidemic diarrhea virus (PEDV) is an enveloped, single-stranded positive-sense RNA virus (1). PEDV is the major causative agent of porcine epidemic diarrhea, which is characterized by severe enteritis, vomiting, watery diarrhea, and weight loss. PEDV infections have a substantial detrimental effect on the swine industry because the mortality rates are high, especially in sucking piglets (1). The major structural gene of the 28-kb PEDV genome encodes the multifunctional virulence factor, spike (S), which is responsible for viral receptor binding, induction of neutralizing antibodies, and host cell fusion. The S gene sequences are a distinguishing feature of PEDV strains, which affect virulence and evolution (2–4).

The first confirmed PED case in the People’s Republic of China was reported in 1973. Almost 2 decades later, an oil emulsion, inactivated vaccine was developed and has since been in wide use throughout the swine industry in China. Until 2010, the prevalence of PEDV infection was relatively low with only sporadic outbreaks; however, starting in late 2010, a remarkable increase in PED outbreaks occurred in the pig-producing provinces. The affected pigs exhibited watery diarrhea (Figure 1, panels A, B), dehydration with milk curd vomitus (Figure 1, panel C), and thin-walled intestines (Figure 1, panel D) with severe villus atrophy and congestion (Figure 1, panels E, F). The disease progressed to death within a few days. Pigs of all ages were affected and exhibited diarrhea and loss of appetite with different degrees of severity, which were determined to be age dependent; 100% of suckling piglets became ill. Pigs >2 weeks of age experienced mild diarrhea and anorexia, which completely resolved within a few days (5). Morbidity and mortality rates were lower for vaccinated herds than for nonvaccinated herds, which suggests the emergence of a new PEDV field strain(s) for which the current vaccine, based on the CV777 strain, was partially protective. To identify the PEDV strain(s) responsible for the recent outbreak in China, we sequenced the full-length S gene of isolates obtained from diarrhea samples collected from pigs at 9 affected pig farms.

Nine diarrhea samples were collected from pigs at 9 farms (where animals had severe diarrhea and mortality rate was high) for sequencing analysis of the full-length S gene (Technical Appendix Table 1). RT-PCR gene-specific primers were designed on the basis of the sequence of PEDV-CV777 strain (GenBank accession no. AF353511.1) (Table 1) and used to amplify 3 overlapping cDNA fragments spanning the entire S gene. The amplicons were sequenced in both directions (GenScript Co., Nanjing, PRC).

The 9 PEDV S gene sequences were aligned with the sequences of 24 previously published PEDV S genes (Table 2) by using the ClustalX (version 1.82), Bioedit (version 7.0.9.0) and MegAlign version 5.0 (DNAStar Inc., Madison, WI, USA) software packages (14). The full-length S gene sequences of the 9 isolates from our study showed overall high conservation with the reference strains, up to 94.9%–99.6% homology (Technical Appendix Table 2). By phylogenetic analysis, 4 of the field isolates (CH2, CH5, CH6, CH7) clustered with the previously described strain JS-2004–2 from China. Three field isolates (CH1, CH8, CHGD-01) formed a unique cluster with the sequence-confirmed variant strain CH-FJND-3, which had been isolated from China in 2011 (7). CH1 and CH8 were isolated from 2 farms, where all sucking piglets had died from diarrhea, even though all of the sows had been vaccinated with the PEDV-CV777 strain–based inactivated vaccine. The isolated variant strains, CHGD-01 and CH1, were tested in experimental infection studies and found to cause illness in 100% of sucking piglets (data not shown). 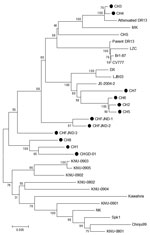 Figure 2. . Phylogenetic trees of porcine epidemic diarrhea virus (PEDV) strains generated by the neighbor-joining method with nucleotide sequences of the full-length spike genes. Bootstrapping with 1,000 replicates was performed to determine...

The recent 4 isolates from China (CH2, CH5, CH6, CH7) were closely related to the previously identified isolates from China (JS-2004–2, LJB03, DX) and another 4 variant strains. Three of the new isolates (CH1, CH8, CHGD-01) were highly pathogenic in piglets. All strains were obtained from farms that used the CV777-based inactivated vaccine but had 100% prevalence of diarrhea in pigs (Technical Appendix Table 1). Another 2 field isolates (CH3, CH4) from 2 farms with pigs with severe diarrhea shared the highest sequence identity with attenuated strain DR13 from South Korea (99.2% and 99.1%, respectively), which has been in routine use as an oral vaccine against PEDV in South Korea since 2004 (15). The appearance of strains in China similar to those from South Korea and their role in the recent PEDV outbreak should be further investigated.

RT-PCR amplification and sequencing analysis of the full-length PEDV spike genes were used to investigate isolates from diarrhea samples from local pig farms with severe diarrhea in piglets. Both classical and variant strains were detected, implying a diverse distribution profile for PEDV on pig farms in China. The sequence insertions and mutations found in the variant strains may have imparted a stronger pathogenicity to the new PEDV variants that influenced the effectiveness of the CV777-based vaccine, ultimately causing the 2011 outbreak of severe diarrhea on China’s pig farms. Future studies should investigate the biologic role of these particular insertions and mutations. Furthermore, our study of the full-length S gene revealed a more comprehensive distribution profile that reflects the current PEDV status in pig farms in China, including the presence of a strain similar to strain DR13, isolated in South Korea. Collectively, these data indicate the urgent need to develop novel variant strain–based vaccines to treat the current outbreak in China.

Mr Li is a PhD student at Huazhong Agricultural University. His research interests are focused on animal pathogen isolation and pathogenic mechanisms.

This work was supported by grants from the National Swine Industry Research System (no. CARS-36) and the Special Project from Guangdong Science and Technology Department (no. 2010B090301020).

Page created: July 19, 2012
Page updated: July 19, 2012
Page reviewed: July 19, 2012
The conclusions, findings, and opinions expressed by authors contributing to this journal do not necessarily reflect the official position of the U.S. Department of Health and Human Services, the Public Health Service, the Centers for Disease Control and Prevention, or the authors' affiliated institutions. Use of trade names is for identification only and does not imply endorsement by any of the groups named above.