To the Editor: Rickettsia raoultii is an obligate intracellular gram-negative bacterium belonging to the spotted fever group (SFG) of the genus Rickettsia. Genotypes RpA4, DnS14, and DnS28, originally isolated from ticks from Russia in 1999 (1), were designated as Rickettsia raoultii sp. nov. on the basis of phylogenetic analysis (2). R. raoultii has been found mainly in Dermacentor spp. ticks in several countries in Europe (3). It was detected in a Dermacentor marginatus tick from the scalp of a patient with tick-borne lymphadenitis in France (2), which suggests that it might be a zoonotic pathogen. We determined the prevalence of R. raoultii–like bacteria in Dermacentor spp. in highland regions in Tibet.

Ticks from sheep (Ovis aries) near Namuco Lake (a popular tourist destination 4,718 m above sea level) were collected and identified morphologically as D. everestianus and D. niveus ticks (4). Genomic DNA was extracted from individual specimens by using the QIAamp DNA Mini Kit (QIAGEN, Hilden, Germany). All DNA samples were amplified by using PCRs specific for the citrate synthase (gltA, 770 bp) gene (5) and the outer membrane protein A (ompA, 629 bp) gene (6). Some samples were amplified by using a PCR specific for the ompB (2,479 bp) gene (7). 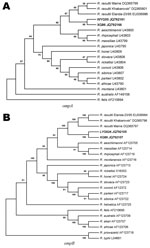 Figure. . . Unrooted phylogenetic trees inferred from comparison of A) outer membrane protein A (ompA) and B) ompB gene sequences of rickettsial species by using the neighbor-joining method. Sequences in boldface...

Prevalence of R. slovaca and R. raoultii was 6.5% and 4.5% in D. silvarum ticks in Xinjiang Uygur Autonomous Region of China (10). In contrast, we found that the overall prevalence of R. raoultii–like bacteria might be ≤84.6% in D. everestianus and D. niveus ticks in Dangxiong County in Tibet.

Our findings suggest that D. everestianus and D. niveus ticks are potential vectors of R. raoultii–like bacteria and indicate that spread of R. raoultii-like bacteria encompasses a large area in China. In the study sites, yak and Tibetan sheep are the major domestic animals, and rodents are the major wild animals. Rodents are also the major hosts of Dermacentor spp. ticks, which can transmit R. raoultii transstadially and transovarially (2). Animals bitten by infected ticks can acquire the pathogen and serve as natural reservoirs.

On the basis of phylogenetic analysis, we found that the Rickettsia spp. in ticks investigated represents a novel species, which can be designated Candidatus Rickettsia tibetani. However, additional phylogenetic studies are needed to obtain more information on the molecular biology of these bacteria.

We thank Robin B. Gasser for providing comments and revising the manuscript.