We report a retrospectively identified fatal case of severe fever with thrombocytopenia syndrome (SFTS) in South Korea from 2012. SFTS virus was isolated from the stored blood of the patient. Phylogenetic analysis revealed this isolate was closely related to SFTS virus strains from China and Japan.

Severe fever with thrombocytopenia syndrome (SFTS) causes signs and symptoms including high fever, vomiting, diarrhea, thrombocytopenia, leukopenia, and multiple organ failure and has a 6%–30% case-fatality rate (1–4). Caused by a novel bunyavirus, SFTS virus (SFTSV), SFTS was initially reported in China in 2011 (1). SFTSV has been detected in Haemaphysalis longicornis ticks, which have been implicated as a vector of the virus (1). H. longicornis ticks widely inhabit the Korean Peninsula (5,6), and the Korea Centers for Disease Control and Prevention reported that SFTSV was detected in samples from H. longicornis ticks collected during 2011–2012 in South Korea (7). Seroconversion and viremia of SFTSV have been demonstrated in domesticated animals such as goats, sheep, cattle, pigs, and dogs; these animals have been implicated as intermediate hosts in SFTSV-endemic areas (8,9). SFTSV was also detected in Japan in February 2013 (10). We report a retrospectively identified case of SFTS in South Korea from 2012 and the characterization of the SFTSV isolated from the patient.

On August 3, 2012, fever developed in a previously healthy 63-year-old woman who lived in Chuncheon-si, Gangwon Province, South Korea; the same day, she noticed a lump on the left side of her neck. She visited a local clinic, and ciprofloxacin and ceftriaxone were started on the first day of illness. The patient reported that, 2 weeks before her fever started, she noticed an insect bite on her neck while she was working on a crop farm in Hwacheon-gun, Gangwon Province (in the northernmost part of South Korea). She did not recall having contact with any domestic animals on the farm and had no history of travel outside South Korea in the month before illness onset.

On the third day of her illness, she began having watery diarrhea, 6 times per day. On the fourth day of the illness, thrombocytopenia and leukopenia were recorded at the local clinic (Table). Because of worsening thrombocytopenia, she was transferred to another hospital. Ciprofloxacin was changed to doxycycline, and ceftriaxone was continued. A computed tomography scan of the neck showed an enlarged (1.6 cm), necrotic lymph node. Multiple lymph nodes on the left cervical and left axillary areas were also swollen. On the sixth day, the patient was transferred to Seoul National University Hospital.

At admission to the hospital, the patient was febrile but alert. Her temperature was 38.7°C, blood pressure 126/70 mm Hg, heart rate 86 beats per minute, and oxygen saturation 92% on room air. Her face was puffy, with a sunburned appearance, and both conjunctivae were congested. The insect bite site on her posterior neck was swollen and erythematous, and the draining cervical lymph node was enlarged. Petechiae were observed on her shoulders and lower extremities.

On the eighth day of her illness, the patient spoke incoherently and was unable to communicate. Cerebrospinal fluid analysis showed no erythrocytes or leukocytes and a normal chemistry profile. A computed tomography scan of the brain showed no evidence of hemorrhage or infarction and no other abnormalities. She was transferred to the intensive care unit. On the ninth day, she was intubated and placed on continuous renal replacement therapy. On the tenth day of illness (August 12, 2012), the patient died of multiple organ failure. Ceftriaxone and doxycycline were continued until the patient’s death. Antiviral drugs, corticosteroids, immunosuppressive agents, or intravenous immunoglobulin were not given. 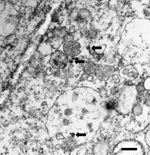 Because viral infection was suspected but no virus could be identified, an anticoagulated blood sample was obtained from the patient on the eighth day of illness and stored at −70°C. When testing for SFTSV became available 7 months later, we inoculated monolayers of Vero cells with the patient’s blood sample and cultured the cells at 37°C in a 5% carbon dioxide atmosphere. A culture supernatant obtained 13 days after the inoculation was used for genetic analysis. The culture supernatant was also used to inoculate DH82 cells when the cell line became available; 5 days after the inoculation, we observed a cytopathic effect of SFTSV in DH82 cells. The SFTSV-infected Vero cell monolayer was fixed according to described methods (11) and cut on ultramicrotome (RMC MT-XL) at 65 nm. Ultrathin sections were stained with saturated 4% uranyl acetate and 4% lead citrate before examination with a transmission electron microscope (HITACHI-7100; Hitachi High-Technologies, Ibaraki, Japan) at 75 kV (Figure 1).

RNA was extracted from the stored blood and from virus-infected Vero cells by using a QIAamp Viral RNA Mini Kit (QIAGEN, Hilden, Germany). Reverse transcription PCR (RT-PCR) was performed to amplify the partial large (L) segment of the viral RNA from the stored blood to confirm SFTSV, as described (12). RT-PCR results were positive, and direct sequencing was done. A BLAST search (http://blast.ncbi.nlm.nih.gov/Blast.cgi) showed no sequences from organisms other than SFTSV.

Figure 2. . . Phylogenetic tree for the RNA-dependent RNA polymerase (RdRP) gene sequences of the large segment of an isolate obtained from a patient in South Korea who died of an illness...

Using the culture supernatant, full lengths of all 3 genome segments (L, medium [M], and small [S]) were sequenced by RT-PCR and direct sequencing was performed by using primers designed from previously published SFTSV sequences. After polyadenylation of 3′ ends of the genomic and complementary RNAs, the sequences of the segment ends were obtained by rapid amplification of cDNA ends. The complete sequences of the L, M, and S segments were deposited in GenBank (accession nos. KF358691–KF358693). Sequences that had homology to our isolate were identified by BLAST search. The L, M, and S segments of the isolate showed 95.8%–99.8%, 94.1%–99.9%, and 94.8%–99.7% identity, respectively, to previously reported SFTSV sequences. We also constructed a phylogenetic tree by the neighbor-joining method using RNA-dependent RNA polymerase gene nucleic acid sequences to compare the isolate we obtained to representative SFTSV strains from China and Japan; the isolate and the other strains were closely related (95.9%–99.9% sequence relatedness) but not identical (Figure 2).

We confirmed a case of SFTS in South Korea in 2012 by isolation of SFTSV from a stored blood sample collected shortly before the patient’s death. The patient had a history of an insect bite while working on a crop farm in Hwacheon-gun, Gangwon Province, the northernmost part of South Korea. Phylogenetic analysis of the RNA-dependent RNA polymerase gene showed that our virus isolate was closely related to SFTSV strains reported from China and Japan.

Page created: August 07, 2013
Page updated: August 07, 2013
Page reviewed: August 07, 2013
The conclusions, findings, and opinions expressed by authors contributing to this journal do not necessarily reflect the official position of the U.S. Department of Health and Human Services, the Public Health Service, the Centers for Disease Control and Prevention, or the authors' affiliated institutions. Use of trade names is for identification only and does not imply endorsement by any of the groups named above.