Anaplasma phagocytophilum, the causative agent of human granulocytic anaplasmosis (HGA), is a zoonotic tickborne pathogen transmitted by ixodid ticks that infects wild and domestic mammals and humans (1–3). HGA was first identified in the United States in 1994 (1) and subsequently in countries in Europe (3), China (4), and Japan (5).

To our knowledge, there is no report regarding the clinical description of HGA patients in South Korea. However, A. phagocytophilum has been detected in Haemaphysalis longicornis, Ixodes nipponensis, and I. persulcatus ticks (6,7) in this country. Molecular epidemiologic studies detected A. phagocytophilum in 2.6% (5/196) of striped field mice (7,8) and in 63.6% (42/66) of Korean water deer (9). Seroprevalence studies showed that 1.8% of serum samples from patients with acute fever were positive for A. phagocytophilum by an immunofluorescence antibody test (10). We report a patient with HGA and characterized the A. phagocytophilum isolate from this patient.

On May 17, 2013 (day 0, day of illness onset), fever, chills, nausea, and vomiting developed in a 57-year-old woman who lived in Chuncheon, Gangwon Province, South Korea. She came to a local clinic on the same day, and treatment with antipyretic drugs was initiated. The patient reported being bitten by a tick on her right shoulder while mountain climbing in Gangwon Province 5 days before the fever occurred. She did not recall having contact with any domestic animals and had no history of travel outside South Korea in the month before illness onset.

On day 4, the patient came to Kangwon National University Hospital (Chuncheon, South Korea) with a persistent fever despite use of antipyretics. The patient had a temperature of 39.2°C, blood pressure of 76/61 mm Hg, heart rate of 88 beats/min, and an oxygen saturation level of 98.3% on room air. An erythematous maculopapular lesion, 3 cm in diameter, was observed around the tick bite on the right shoulder. Laboratory tests showed pancytopenia and increased serum aminotransferase levels (Table).

On day 5, the patient was treated with norepinephrine, ceftriaxone, and doxycycline. On day 7, her blood pressure and temperature were within reference ranges and a norepinephrine infusion was discontinued. Peripheral blood smear showed no evidence of malaria, and antibody titer against Orientia tsutsugamushi was <1:40. Test results for antibodies against Hantaan virus, leptospira, Borrelia burgdorferi, and Coxiella burnetii were negative. Blood cultures prepared at the time of the visit were negative. On day 11, she was discharged from the hospital, and treatment with antimicrobial drugs was discontinued.

Because symptoms and laboratory findings, such as thrombocytopenia, anemia, and increased aminotransferase levels (Table), of the patient were similar to those for severe fever with thrombocytopenia syndrome (SFTS), anticoagulated blood and serum were obtained on day 5 before treatment with doxycycline and on day 19. Samples were sent to Seoul National University College of Medicine for additional diagnostic tests.

RNA was extracted from blood by using the QIAamp Viral RNA Mini Kit (QIAGEN, Hilden, Germany). Reverse transcription PCR for SFTS virus was performed according to described methods (11) and showed negative results. No cytopathic effect was observed in Vero cells and DH82 cells after inoculating them with a blood sample.

Figure 1. Phylogenetic trees for partial 16S rRNA gene sequences of an Anaplasma phagocytophilum isolate obtained from a patient with human granulocytic anaplasmosis in South Korea (black dots) and those of the A....

Comparison of the 16S rRNA gene sequence with sequences for other A. phagocytophilum strains from South Korea showed that this sequence was relatively distant from those of Korean water deer isolates, but similar to those of tick isolates from Jeju Island (Figure 1, panel A). Comparison of the 16S rRNA gene sequence with other sequences of A. phagocytophilum strains reported from other countries showed that our isolate was relatively distant from the strains obtained from ticks collected in Gansu and Guangxi, China, and Hokkaido and Shimane, Japan. The isolate was similar to a human isolate from the United States, tick isolates from Russia and China, and animal isolates from Yunnan, Zhejiang, and Hubei, China (Figure 1, panel B). 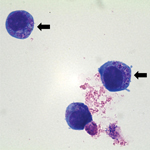 For A. phagocytophilum culturing, a suspension of human promyelocytic cell line HL-60 (ATCC CCL-240) was inoculated with the patient’s blood sample (day 5 postillness, before treatment with antimicrobial drugs) and incubated at 37°C in an atmosphere of 5% CO2 (10). The culture suspension was examined microscopically by Wright-Giemsa staining of cytocentrifuged preparations of cells at 2 to 3-day intervals. Subculture was performed on day 14 postinoculation. On day 8 post-subculture, morulae within cultured HL-60 cells were observed (Figure 2).

Nested PCRs to amplify 16S rRNA and ankA genes showed positive results for isolates from day 14 postinoculation and from day 10 postsubculture. Single, non-nested PCRs to amplify groESL and msp2 genes showed positive results for the isolate from day 14 postinoculation but negative for the isolate from day 10 postsubculture. Comparison of sequences from culture isolates and those from PCR products directly amplified from the blood sample showed that these sequences were identical.

For serologic diagnosis, an immunofluorescence antibody test kit for A. phagocytophilum (Fuller Laboratories, Fullerton, CA, USA) was used. Positive cutoff titers were 1:16 for IgM and 1:80 for IgG, according to the manufacturer’s instructions. Specific IgM titers increased from 1:16 (day 5) to ≥1:256 (day 19). Specific IgG antibody titers increased from 1:20 (day 5) to 1:160 (day 19).

We confirmed a case of HGA in a patient in South Korea (who was suspected of having SFTS) by using serologic analysis, PCR, culture, and sequence analysis for A. phagocytophilum. According to the case definition of HGA of the US Centers for Disease Control and Prevention (Atlanta, GA, USA) (2), this case fulfilled the criteria for anaplasmosis. The patient had a history of a tick bite, and the clinical symptoms and laboratory findings were similar to those of SFTS, an emerging vector-borne disease in South Korea (11).

No effective treatment for SFTS is available, but doxycycline is effective for treating HGA (2). Clinical features of HGA may be confused with those for SFTS, which may result in inappropriate treatment and severe outcomes. Therefore, not only SFTS but also HGA should be considered as differential diagnoses for patients with fevers and thrombocytopenia after tick bites.