We conducted a population survey in Hong Kong to gauge psychological and behavioral responses to the threat of influenza A(H7N9) and support for closure of live poultry markets. We found low anxiety and low levels of exposure to live poultry but mixed support for permanent closure of the markets.

A novel influenza A(H7N9) virus was detected in China in March 2013, and an epidemic of infections in poultry and humans occurred during April and May of that year (1,2). Most persons who had laboratory-confirmed infections reported recent contact with live poultry, and evidence suggests that human-to-human transmissibility of the virus is low (2). Incidence of laboratory-confirmed human cases dramatically decreased following the closure of live poultry markets (LPMs) in affected cities in April 2013 (3). Control of the virus is challenging because its low pathogenicity in poultry (4) requires reliance on laboratory-based surveillance in animals or humans to identify areas where the virus is prevalent and to facilitate interventions to reduce human exposure to infected poultry.

Hong Kong imports live poultry from mainland China only from a few dedicated farms that have adequate biosecurity protection; intensive surveillance for avian influenza is conducted at the border and within Hong Kong. Risk for influenza A(H7N9) virus infection appears to be low in Hong Kong, but 4 infections have been reported in Hong Kong residents since December 2013, and a surge in influenza virus transmission was anticipated in eastern China this winter (2). Prevention and control activities rely on accurate measures of exposure to live poultry, risk perception and psychological and behavioral responses related to the virus, and attitudes toward specific control measures. We therefore conducted a series of cross-sectional population surveys to monitor these variables in Hong Kong.

We initiated the first survey in April 2013 (April 10–13 and 25–27), shortly after the first human case of influenza A(H7N9) was announced in mainland China. A second survey was conducted December 4–8, after incidence of human cases began to rise in the winter and the first local infection occurred in Hong Kong. We used methods and survey instruments similar to those used for surveys during the severe acute respiratory syndrome epidemic in 2003 (5), the influenza A(H1N1)pdm09 pandemic (6), and the emergence of avian influenza A(H5N1) (7).

For the survey, trained interviewers made telephone calls to land lines by using a computerized, random-digit dialing system; calls were placed during nonworking hours and weekends to avoid overrepresentation of nonworking groups. Within households, adults >18 years of age who spoke Cantonese were eligible and were randomly selected on the basis of a Kish grid (8). Up to 4 follow-up calls were made if participants were not available or if calls were unanswered. Verbal informed consent was obtained from all participants. Means and proportions of survey items were directly weighted by sex and age to the general population, and multiple imputation with 10 datasets was used to correct for missing data.

We completed 1,556 interviews during the April survey and 1,000 interviews during the December survey; response rates were 68.9% and 68.0%, respectively. The characteristics of respondents were similar for each survey period (Technical Appendix). Figure 1 illustrates the timeline of laboratory-confirmed cases of influenza A(H7N9) compared with the dates of our surveys. 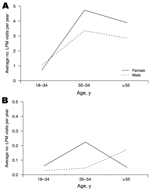 During the December survey, we also collected data on exposures to live poultry markets (LPMs). A total of 26.7% of respondents reported visiting an LPM in Hong Kong >1 time during the previous year; of those, 61.4% and 37.5% reported visiting >1 time per month and >1 time per week, respectively. In addition, 6.9% of respondents reported visiting an LPM in mainland China >1 time during the previous year. Across the population, we estimated the average numbers of annual visits to LPMs in Hong Kong and mainland China to be 17.6 and 0.53 visits per person, respectively. These estimates were based on an assumption of standardized annual numbers of visits for responses 1–2/year, 3–5/year, 6–11/year, 1–3/month, 1–2/week, 3–5/week, almost every day, or never to be 1.5, 4, 8.5, 24, 78, 208, 365, and 0 visits, respectively. Figure 2 shows the distribution of number of visits by age and sex; in a multiple regression model, we found significantly (p<0.01) fewer visits to LPMs among younger adults but no significant differences by sex.

A total of 17.5% respondents reported that they had avoided visiting LPMs in the previous 7 days because of influenza A(H7N9), whereas 35.9% reported that they would support or strongly support permanent closure of LPMs. We used multivariable logistic regression to examine factors associated with avoiding LPMs or supporting closure of LPMs (Table 2) and found that more symptom-induced worry and higher perceived severity compared with seasonal influenza were associated with avoiding visiting LPMs. Younger age, lower educational attainment, and having visited LPMs >1 time in the preceding year were independently associated with a lower probability of support for permanent LPM closures.

Results from previous studies and our surveys indicate that exposure to poultry measured by LPM visits among the Hong Kong population has declined since 2006 (7) and is lower than that for cities in southern China (9–11). Contact with live poultry or visiting LPMs was reported by most persons with confirmed influenza A(H7N9) in China (2). Four recently reported influenza A(H7N9) cases in Hong Kong were suspected to be imported; all 4 patients reported travel to Shenzhen, the city bordering Hong Kong, which reported 17 new cases during January 1–February 9, 2014. One of the patients in Hong Kong bought live poultry from an LPM in Shenzhen, where 2 LPMs subsequently yielded environmental specimens testing positive for influenza A(H7N9) virus (12).

We previously reported that LPM closure substantially reduced the risk for human infection with influenza A(H7N9) virus in mainland China (3). Control measures in LPMs in Hong Kong have become increasingly stringent during the past decade, and the current policy banning any overnight stay of live poultry in LPMs has substantially decreased avian influenza virus prevalence among poultry (13). This policy might also contribute to the low perceived risk for infection and low levels of symptom-induced worry observed in this study (Table 1).

Our study has limitations. Because participants were recruited on the basis of randomly selected telephone numbers, respondents might not represent the general population in Hong Kong, despite weighting of the sample by age and sex. Responses in the survey were self-reported and might be subject to response biases, including social desirability bias. We also used contact history in the previous year to measure respondents’ live poultry exposure, which could be subject to recall bias.

In conclusion, our survey found generally low anxiety levels among the population in Hong Kong related to the threat of influenza A(H7N9). A higher level of symptom-induced worry and higher perceived severity of influenza A(H7N9) compared with seasonal influenza were associated with avoidance of LPMs. Permanent closure of LPMs is being considered in Hong Kong, but our results suggest that obtaining support from the public might be difficult, particularly among younger adults and adults with lower educational attainment.

Dr Wu is a postdoctoral fellow in infectious disease epidemiology at the University of Hong Kong. Her research interests include transmission dynamics of respiratory infections and the effectiveness of control measures.

This work was supported by the Area of Excellence Scheme of the Hong Kong University Grants Committee (grant no. AoE/M-12/06) and the Harvard Center for Communicable Disease Dynamics from the National Institute of General Medical Sciences (grant no. U54 GM088558). B.J.C. receives funding from MedImmune Inc. and Sanofi Pasteur and consults for Crucell NV.